Far From the Mainland: A pastor assesses the spiritual journey of Chinese Catholic immigrants. 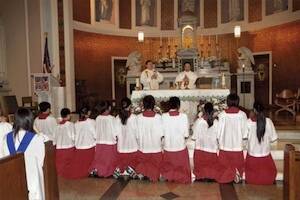 If I went back to China, I would probably be arrested,” the Rev. Joseph Ruan told me, as we sat in the rectory of St. Joseph Church in the Chinatown neighborhood of Manhattan. A quiet, energetic priest in his mid-40s, Father Ruan has ministered to the Chinese immigrants here for more than five years. Like him, most are from the Fujian Province in southern China. Three decades ago these people began to migrate to New York in large numbers, fleeing the religious persecution of the Chinese Communist government.

Chinatown is a microcosm of what many Chinese immigrants who come to the United States face when they seek asylum. Many pay human smugglers, known as snakeheads, up to $70,000 to reach the United States, said Father Ruan. Typically the immigrants arrive in California or New York, the two states with the largest concentrations of Chinese-born populations. In order to pay off their travel debt, including interest, many work 12-hour days in local Chinese restaurants—for years. To cope with the high rents, workers sometimes cluster together to share a single room. And like so many other immigrants from around the world, those without documents have virtually no rights until their appeals for asylum are successful.

The young Chinese, who arrive in roughly equal numbers of men and women, sometimes work double shifts, an arrangement made possible by local restaurants that occasionally provide workers with on-site beds where they can sleep for a few hours. Few speak English when they arrive, and few have the time or resources to take formal lessons. Gradually, some do acquire an ability to communicate in English, especially those who move on to other states where the pay is better, the hours are fewer and the rents are lower. As they progress economically, some open take-out restaurants of their own. Most hope that hard work will enable them to marry and start a family, Father Ruan said. Here their children will receive an education that they themselves never had. Meanwhile, such immigrants’ existence is precarious. Few can afford health care. When illness strikes, immigrants who have not yet been granted asylum avoid hospitals except in emergencies and rely instead on over-the-counter medications or folk remedies.

The Catholic immigrants typically arrive with a letter from their pastor in China stating they are bona fide Catholics. After they have attended Sunday Mass at St. Joseph Church in nearby Greenwich Village for three months or more, they qualify for a “letter of certification” from the parish. “I then give them a certificate stating that they are members here,” Father Ruan said. They can present the certificate in court at their immigration hearings, accompanied by a lawyer, whose fee tends to be another big expense.

Father Ruan often accompanies the parishioners, too. Most of the appeals for asylum are accepted, he said, on the basis of religious persecution. “Even if the appeal is not immediately granted, another effort can be made the following year, without the danger of immediate deportation back to China.” He explained that in this respect, the situation of Chinese immigrants is very different from that of undocumented Latinos, for whom religious persecution is not typically an issue.

Some Chinese immigrants seek to become Catholics. “I offer a course in basic catechetics for six months or more,” Father Ruan said, “then I test them to see whether they grasp fundamental Catholic teachings.” The priest baptizes those who pass the test, typically during the Easter Vigil. “The whole worshiping community takes part in welcoming them at that liturgy,” Father Ruan said. Others are baptized on the feast of the Assumption or at Christmas. Each year some 150 to 200 young adults seek baptism at the parish.

In China many Catholics worship in so-called underground churches, which the Chinese government does not recognize as legitimate. Until relatively recently, many worshippers attended Mass in house churches that date back to the Cultural Revolution (1966 to 1976), when Christian worship was forced underground. In some regions house churches have become a bit more tolerated since the 1980s, when economic reforms were initiated by the former Chinese Communist leader Deng Xiao Ping. Some Chinese priests and bishops were released from prison, and seminaries reopened in places like Shanghai and Beijing under the control of the so-called Catholic Patriotic Association. But harassment and imprisonment are still common for members of the underground churches.

International pressure has softened the situation somewhat with respect to the selection of Catholic bishops. Once the Chinese government would not accept as bishops those whom the Vatican proposed. The situation remains anomalous, Father Ruan said, because the power of selection still lies with the Chinese Patriotic Association. This group, he noted, continues to cause difficulties for Catholics in the practice of their faith. Some lay people who belong to the association “work for the government and report on the activities of priests and lay people that could result in imprisonment.” As he put it, “the association controls the bishops and priests.” Yet many bishops of the Chinese Patriotic Association who applied to the Vatican for recognition have been accepted as legitimate by Rome.

What impresses Father Ruan is the faith of the parishioners. For the main Sunday afternoon liturgy at St. Joseph’s, worshippers come from as far away as Boston, Philadelphia and Washington, D.C. All three cities have Chinese-operated bus companies that offer low fares and make it possible for the people to attend the 3 p.m. liturgy. Except for the presider’s prayers, the congregation sings nearly the entire Mass.

When I attended the Mass one afternoon, I noted the intense concentration of the people present. The same was true at a Sunday afternoon funeral Mass for a young Chinese man who had died of cancer. Though a funeral Mass, it was nevertheless the community’s Sunday worship, and the church was almost full. At Christmas, over 700 people attend the midnight Mass and the Masses on Christmas Day.

Father Ruan celebrates in Mandarin, the official government language. Parishioners learned it in state-run schools in China, even though in their families they speak one of the various Fujianese dialects used in Fuzhou, the capital city of Fujian Province.

Father Ruan’s own spiritual journey was long and hard. His desire to be a priest dated from childhood. Intensely Catholic, his whole family rose before dawn in their village to pray the rosary and other devotions on their knees before beginning the farm work; they prayed again before going to bed. Since they had no electricity, the Ruans prayed by candlelight. Their small house with simple furniture had no place to hide forbidden objects like crucifixes, rosaries and holy pictures when government agents came to search for them and take them away. The priest’s father was persecuted during the Cultural Revolution and beaten by Communists. These events, said Father Ruan, the youngest child in his family, date back to the period when the Chinese government regularly imprisoned priests and bishops.

Despite his family’s objections because of the difficulty and length of time involved in becoming a priest, Father Ruan persevered in his desire. His studies began at age 17 in a clandestine seminary in a mountainous area reachable only on foot. He and other seminarians slept in one big room on mats spread on the wooden floor of a house. Sometimes, when they learned that the police knew of their activities, the seminarians had to move to another sequestered mountain location. Eventually they returned to their homes. “But we never lost our vocation,” the priest said.

From 1983 to 1989, Father Ruan studied philosophy and theology at a seminary in Shanghai. There at the She-shan Basilica, the seminary rector, Bishop Aloysius Jin, ordained him to the priesthood. Bishop Jin “wanted to keep me there to teach in the seminary,” said Father Ruan, “because there were not enough priests.” For nine years he worked as a pastor in various parishes and taught in the minor seminary in Fujian Province.

Then he expressed a desire to continue his studies on the doctoral level. No such programs were available in China. For doctoral studies, he would have to leave China, but the government would not grant him a passport. Despite numerous complications, the priest obtained a passport with the help of a parishioner friend who ran a travel agency. Father Ruan went to Hong Kong with a letter of recommendation from his own bishop, Joseph Zheng, which he presented to Cardinal Joseph Zen. The cardinal sent him to Rome to study for a doctorate in moral theology at the Pontifical Lateran University.

The opportunity came with a warning. Bishop Zheng warned Father Ruan that the police would be waiting to imprison him if he tried to return to China after receiving his degree. “I was offered an opportunity to work in Rome for the Italian Web site agency Asianews” he said. Around that time, however, Cardinal Edward Egan of New York met with Cardinal Zen in Rome and expressed his need for a priest to serve the Fujianese Catholic community in New York. Cardinal Zen recommended Father Ruan. Ironically, the Chinese government’s refusal to accept him as a priest gave Father Ruan the freedom to come to America. He was assigned to St. Joseph Church.

At the end of our conversation, Father Ruan expressed dismay at the attitude of the Chinese government: “China is now so open to the world; why then is it so afraid of religion?” That question may not be answered for a long time to come, but in the meantime, the Chinese who worship at St. Joseph Church know that the struggles involved in their search for asylum and the freedom to worship according to their own faith have been worth the dangers and costs involved.

How sad it is that it's become so difficult for people badly in need of safety and shelter to find a home here.  It didn't used to be that way.  We've become a gated country.