Skip to main content
Signs Of the TimesMarch 29, 2010 issue 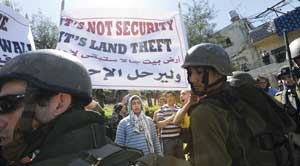 The Waldorf-Astoria Hotel in Manhattan might seem a strange place for a human rights protest, but on March 9 some 400 people walked in single file in a slow, silent procession. Holding signs calling for “Justice for Gaza,” the demonstrators were protesting what was taking place inside—a $1,000-a-plate dinner hosted by the Friends of the Israeli Defense Forces. Inside the Waldorf the event raised $20 million for I.D.F. veterans while the marchers on the street outside tried to raise awareness of the Gaza blockade. The event’s keynote speaker was the I.D.F. chief of staff, Lt. Gen. Gabi Ashkenazi. Ashkenazi was likely also key to discussions just a few avenues away at the United Nations, where Operation Cast Lead, the incursion into the Gaza Strip that he led during December 2008 and early January 2009, was being scrutinized for possible instances of war crimes and crimes against humanity.

For the Waldorf Hotel protesters, with Gaza all but cut off from the free flow of humanitarian supplies like food and medicine, hopes for peace between Israel and Gaza remain more tenuous than ever. The fragility of the situation in the Middle East was underscored by the outbreak of hostilities, not between the Israelis and Palestinians, but between the government of Prime Minister Benjamin Netanyahu and the Obama administration after Vice President Joe Biden’s ill-fated trip to Israel in early March.

Biden intended his visit to reassert the U.S. commitment to Israeli security and to jump-start the long-stalled peace negotiations. But his efforts were thwarted by the undiplomatic timing of an Israeli ministry’s announcement of a plan to build 1,600 housing units for Jews in East Jerusalem, where Palestinians hope one day to build the capital of their future state. The gesture appeared deliberately intended to sabotage the “proximity talks” Biden was attempting to orchestrate. If so, it succeeded, as the Palestinian Authority refused to consider even indirect talks with the Netanyahu government.

A red-faced Netanyahu apologized for the timing of the announcement but not its content. Even as his office took pains to project a sense of business as usual, Palestinians and Israeli police squared off under clouds of tear gas in Jerusalem’s Old City, U.S. Special Envoy George Mitchell cancelled a planned visit, and Israel’s ambassador to the United States, Michael Oren, observed that U.S.-Israeli relations faced their worst crisis in 35 years.

Netanyahu was called on the carpet by an irate Secretary of State Hillary Clinton, who demanded that the housing ministry’s plans be dropped, that an investigation of the apparent provocation be conducted and that the Israelis commit to a meaningful gesture aimed at bringing Palestinians back to the Middle East’s increasingly unstable peace table. Netanyahu apparently endured his scolding in silence; he was more voluble and more defiant before the Israeli parliament a few days later when he asserted that construction of Jewish housing in Jerusalem was not a matter open to negotiation.

Gaza observed a grim milestone on March 11, the 1,000th day of the Israeli blockade. The last direct talks between Israel and the Palestinian National Authority were cast aside with the December 2008 launch of Cast Lead, and continuing settlement construction in the West Bank and East Jerusalem presents a profound obstacle to reviving what is left of the peace process.