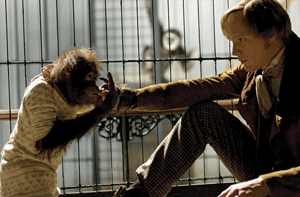 You’ve killed God!” bellows the bantam agnostic Thomas Huxley, during one of the few energized moments in Creation, the director Jon Amiel’s cosmic-domestic take on Charles Darwin, the accused murderer of the aforesaid divinity. Played by the always-entertaining Toby Hooper, the exultant Huxley nearly reaches up and grabs the morose Darwin, played by Paul Bettany, by the lapels, urging him to finish the book that has eluded him for 20 years.

“We’ll finally get rid of those damned archbishops,” Huxley says, “and their threats of eternal damnation!” What we are rid of almost immediately, upon Hooper’s departure from the film, is electricity. “Creation,” with its ruminations on intellectual truth and beauty, better resembles that favorite Darwinian creature, the barnacle, than any blinding flash of creative lightning.

“The biggest single idea in the history of thought” is how Amiel’s introductory title describes Darwin’s theory of natural selection. While some may prefer to award that honor to gravity or relativity (or perhaps to God, for thinking up…us), it seems safe to say that over the 150 years since its publication, Darwin’s On the Origin of Species has provided one of the three more unsettling moments in the history of human self-regard—the others being the introduction of Freudian psychology and the use of the atomic bomb. This is apt, to a degree: Amiel, abetted by Jon Collee’s screenplay, spends 108 minutes psychoanalyzing Darwin. And there is no explosion.

What there is, throughout this British adaptation of the biography Darwin, His Daughter and Human Evolution, by Randal Keynes, is mental anguish, parental grief and spiritual upheaval. Bettany’s rather gentle Darwin is wracked by doubt over the wisdom of publishing a book he knows will cause ruptures in the social fabric and leave many adrift in spiritual doubt. At the same time, he is mourning the death of his beloved 10-year-old daughter, Annie (played by Martha West), to the point of hallucination: The late Annie visits her father regularly. She has conversations with him. She “guilt-trips” him into staying true to his scientific beliefs. He needed little convincing, but as far as “Creation” is concerned, the death of Annie (Darwin’s beautiful, intelligent and wild child) was the smoking gun that proved a design-free universe.

Darwin himself was never as rigorous a nonbeliever as Huxley or his good friend Joseph Hooker (Benedict Cumberbatch), the botanist/explorer who ended up buried in a churchyard, as Darwin was interred in Westminster Abbey. For all the dread of perdition exhibited by Mrs. Emma Darwin, (played by Jennifer Connelly, who in real life is Mrs. Bettany), dogma, more than divinity, stirs Charles Darwin’s simmering wrath. He is not crazy about the clergy, either. Annie, once made to kneel on rock salt for defying her preacher’s claim that dinosaurs never existed (Dad said they did), knelt until her knees bled. This is the kind of daughter for whom one would tilt at churches.

Beginning with its premiere at last September’s Toronto Film Festival, “Creation” has been libeled as sluggish and soapish. And yes, the strained relationship between Charles and Emma (“Have you really no regard for your immortal soul?”) is the locus of a historically tumultuous story. Some might also regard the intrusion of Mr. and Mrs. Darwin’s interpersonal conflict as a bit banal, in light of the epic battle presumed to be going on between Darwin and his Creator. But this is where screenwriter Collee’s intellectual ambition serves him well. Forgiveness and acceptance are at the root of the couple’s narrative. As played by the casually ravishing Connelly, Emma is a scold for much of the film: “You’re at war with God, Charles, and you both know it’s a war you cannot win.” But the climactic reconciliation scene between husband and wife provides a redemptive catharsis (and a well-acted one; Bettany and Connelly pull out the stops in a good way).

Any idea that hubris was at play in the Darwinian drama is demolished early in the film. On one of their numerous beach outings (during one, Annie contracts the illness that eventually kills her), Charles regales his children with a tale of a long-ago expedition to Tierra del Fuego, during which English naval officers traded buttons for aboriginal children who were brought to England, introduced to the queen and not-quite-indoctrinated in an Anglo-Christian worldview—which they immediately cast off, along with their clothing, upon being returned to the Patagonian beach. The theory had been that once Christianized, the children would become missionary agents among their “savage” brethren. No such luck. And a bad moment for Anglocentrism.

Similarly, there are enough reminders, like Charles’s reliance on hydrotherapy as a cure for what ails him, that no one will mistake the human pursuit of truth as anything but a series of mistakes made with gusto, brio and a certainty that all is well. Until it isn’t. The film does not deny evolution, but it does not espouse shrill scientific certainty either.

Like Darwin (and Newton and Einstein) “Creation” seems inclined to think that God and evolution can co-exist. During a dire moment in Annie’s illness, Charles goes to church and prays to Jesus, having arrived in the foxhole of religious despair. His prayers are not answered, and his resolve against fundamentalist truth is further set, as is his bitterness. It is not until Charles and Emma can embrace their pain and each other that love—and Origin of Species—can bloom.

“Creation” is not really about the correctness of Darwin’s theory, although the opposing team offers a rather weak counteroffensive. Jeremy Northam does a capable turn as Darwin’s real-life friend, the Rev. J. Brodie Innes. But Innes’s response to Darwin is all about faithfulness to dogma rather than intellectual rigor and probity. If there is an argument at the heart of the understated “Creation,” it is not about evolution. It is about the responsibility human beings have to exercise the intellect that God—perhaps—gave them.

John Anderson is a film critic for Variety and The Washington Post and a regular contributor to The New York Times’s Arts & Leisure section.

How exciting! Coming soon to a theater near you!  Whatever this movie, it will stir up a lot of controversy and opportunities for comments, and  I wish the Catholic Church would provide a better answer to the creation vs. evolution conflict than it has up to now.

I was raised an atheist (my parents were anthropologists, and I firmly believed in evolution).

After my conversion in 1969, when I first read the Bible I was amazed at the first chapter of Genesis.  It doesn't say that everything was created in a moment, but over time (we still say "in our day..." meaning a period of time).  And the order in which God created-first light (energy), then water, then land and vegetation, birds and fish, the higher animals and finally humans- is like a proto-history of evolution.  If only we could hear the story of Genesis again in the light of the theorem of evolution.

And it says that God created the heavens and the earth-the material and the spiritual.  Science studies the material creation.  And one can't study spiritual reality by the same means by which one can study the material world.

I fully believe that God created the forces and the processes of evolution.  The seeming randomness, that is like free will; the seeming chaos that in fact has parameters and order, less precise and less predictable than scientists would like, of course, and that fits more with complex systems theory than the classic paradigm of science (see Lawrence Bale's article:  Gregory Bateson, Cybernetics and the Social Behavioral Sciences, which has an excellent description of the difference between them).   And I think it amazing that at the ultimate subatomic levels scientists still find order-not a rigid, immutable order, but a dynamic order with everything moving and vibrating and interacting.

I wish the reviewer had said more about these things than about the inevitable Hollywood-type drama that usually accompanies filmed biographies.