Skip to main content
Signs Of the Times
January 18, 2010 issue 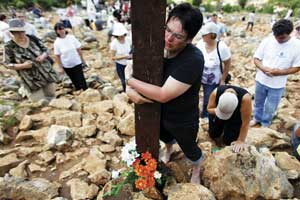 After visiting Medjugorje, the site of reported Marian apparitions in Bosnia-Herzegovina, Cardinal Christoph Schönborn of Vienna said the church must recognize that private pilgrimages to the village result in prayer and reconciliation.

But Bishop Ratko Peric of the Diocese of Mostar-Duvno, which includes Medjugorje, said the cardinal’s very public pilgrimage “has added new sufferings” to those already present in his diocese and did “not contribute to its much needed peace and unity.”

Cardinal Schönborn visited Medjugorje from Dec. 29 to Jan. 1 in what his office described as a “private pilgrimage.” He visited one of the young adults who claimed they began receiving messages from Mary in 1981, and he celebrated Mass in local parishes. He told Vatican Radio’s German language program on Jan. 4 that it was up to the universal church to determine whether or not the alleged apparitions at Medjugorje are supernatural, but he also said it was clear that Medjugorje is a place of prayer, reconciliation and faith-based acts of charity.

“The pilgrims do one thing above all: They pray,” he said during the broadcast. Each day thousands of people recite psalms together, spend time adoring the Eucharist, meditate on the Stations of the Cross and pray the rosary, he said. Medjugorje also is “a place where people have rediscovered confession,” he said.

Cardinal Schönborn told Vatican Radio he believed that until the church issues an official judgment on the apparitions, it is wise not to permit formal pilgrimages, a policy adopted by the bishops of the former Yugoslavia in 1991 and confirmed by the Vatican. But he said it was also important to provide pastoral care to Medjugorje visitors, which the same policy recommended.

In an interview on Jan. 4 with Vercernji List, a daily newspaper, Cardinal Schönborn said, “Jesus said that the bad tree doesn’t bear any fruits, which means if the fruits are good then the tree is good as well.”

Bishop Peric, who repeatedly has questioned the authenticity of the apparitions and struggled to limit the influence of religious living in the diocese without permission, issued a statement on Jan. 2 saying that while he recognized the right of a cardinal to celebrate Mass anywhere in the world, “there also exists a certain etiquette in the church” that encourages a visiting cardinal to discuss a visit with the local bishop. He said neither the cardinal nor anyone from his office contacted him.

The bishop also said that in his diocese the phenomenon of many faithful going to confession is not unique to the churches in Medjugorje. “We believe that the mercy of the heavenly Father is perceptible in Medjugorje, just as in each and every parish of this diocese,” he said. If long lines of faithful waiting to go to confession are seen as a sign that Mary is appearing, he said, then some could argue that she is appearing in every parish in the diocese.

This article also appeared in print, under the headline “Bishops Battle Over Spiritual Worth of Medjugorje Pilgrimages,” in the January 18, 2010, issue.