Skip to main content
Of Many Things
January 18, 2010 issue 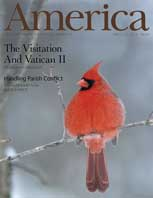 Calls and e-mail messages have been coming in asking whether the cover photo of our last issue was done tongue-in-cheek. I regret to inform suspicious readers that the photo of a northern cardinal perched on a branch and fluffed out for warmth, as the credit on page 2 says, was simply the most colorful option given me for a seasonal cover to mark the onset of winter.

As I look out from my office on the grey stone and asphalt of West 56th Street, the countryman in me resists losing touch with the land and the cycle of the seasons. I wanted to share my now very limited enjoyment of the stark beauty of winter with those of our readers who also draw delight from seasonal change, to break up our string of newsy cover photos and, in a small way, to acknowledge that there is more to record than political and ecclesiastical controversies or even personal journeys of faith. Sometimes in winter a bird appears out of the dim light to our delight and should be enjoyed as the apparition of beauty it is.

When I was a boy, our family’s primary vantage point for bird-watching was the casement window over the kitchen sink. Outside stood a very full pussy willow bush, so hardy my father cut it to the ground at least twice only to have it grow even larger. Before I hung a bird feeder on it when I was a scout, the bush was a favorite perch for songbirds, just as bushes, tangled vines, woody, short trees and the celebrated mustard “tree” of the parable are favorite cover for birds even in the desert. Mom would call me to the window to teach me my birds. There I saw my first cardinal and birds whose sightings would later become more rare, like orioles and tanagers. If memory doesn’t play me tricks, once or twice Mom may have even pointed out an elusive bluebird.

In those early years, Mom used to cut suet and hang it from the bush for birds to feed on. I used to walk on the wall alongside the pussy willow bush to place the fat on the branches. We never had problems in those days. The birds came, fed on the suet, to return again to perch in our special aviary. Problems came later when I thought it would be good to feed the birds with seed. One of our friends, Henry Anderson, managed a garden products plant where they made bird feeders from redwood. I hung a feeder from the bush and proceeded to fill it. Suddenly the songbirds disappeared. Squirrels that rarely migrated from the acorn-rich pin oaks across the street raided the feeder and scared off the birds. Sometimes then our only visitors were the noisy, mean blue jays who were equally discouraging of our hospitality to other birds.

Our other disappointment over bird feeding came with ringnecked pheasants. The woods nearby always had a brood or two. We would watch them from bedroom windows in back of the house as they moved yard by yard from the woods to my grandfather’s vegetable garden and down the rock garden near the house. Their behavior was marvelous. The males would wait on guard while the hens and chicks fed.

One snowy winter we began to feed the pheasants corn. When spring came, we stopped putting out the corn, but the birds still expected to be fed. So at first light they would come under the windows to rouse us with their crowing. Eventually they wandered to our neighbor’s yard, where he fed them. When after a time he fell ill and died, they would still arrive in the morning and peck at his basement windows as if to grab his attention.

Neither those pleasures nor those disappointments are to be had on West 56th Street. We have only pigeons. That is why you found a fluffy cardinal on your last cover.

10 years 1 month ago
Thanks for the cardinal. I get bluebirds also!! I will say a prayer for you when I see the bludbirds.
Advertisement

This article also appeared in print, under the headline “Of Many Things,” in the January 18, 2010, issue.