When I Grow Up: TNT's 'Men of a Certain Age' 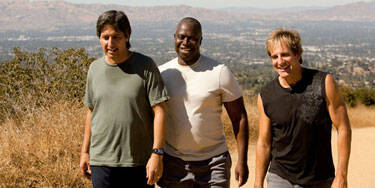 These days people click--not tune--to individual cable stations, fully anticipating what they’ll find on each. When I visit my mother, we negotiate. She’ll select a Lifetime movie about a cancer survivor who helps to raise her grandchildren. I’d just as soon watch something on SyFy, or even better, the Military Channel. How can you get too much of a series like “Hitler’s Bodyguards?” Years ago, our family had to watch whatever two televisions stations, CBS and NBC, offered. We were too deep into Kansas for ABC. That alone should tell you that I am a man of a certain age, qualifying me to discuss the newest offering from Ray Romano.

Men of a Certain Age is a new series airing on TNT, a channel which, as Alessandra Stanley noted in her positive review of the show in the New York Times, “has become a kind of sanctuary where older performers can safely play against type: women are tough and tyrannical cops in shows like ‘The Closer’ and ‘Saving Grace,’ and now the stars of “Men of a Certain Age’ are fragile, sensitive creators almost on the verge of a nervous breakdown.” She’s right about stereotypes being broken. The three lead characters on the show (Romano, Andre Braugher and Scott Bakula) aren’t buffoons, the role that middle age men play in most American family sitcoms. And their wives aren’t know-it-all scolds.

Owen (Braugher: “Homicide: Life on the Street,” “Gideon’s Crossing”) is a father of three young children, working for his father as a car salesman. When he comes home with a small hybrid car, his father’s punishment for low sales, his wife Melissa (Lisa Gay Hamilton) isn’t censorious. Though she will later take up the matter with her father-in-law, she doesn’t double her husband’s humiliation at home. Owen’s embarrassment is alleviated only when he discovers that his new, large, flat-screen TV has been delivered--proving once again that “size matters.”

Romano’s character, Joe, is divorced, but not because, as in many sitcoms, his wife Sonia (Penelope Ann Miller) is a shrew. We learn in the pilot that he has a gambling problem, which has cost him his marriage. One of the most touching scenes comes the day after Ray attends a party at the long-stay hotel where is living. Joe exits quickly when an attractive woman begins to make advances. He knows that this isn’t what he wants. The next day, while picking up the kids, he asks his estranged wife to recommend an optometrist. He needs reading glasses. Joe exits and then comes back to ask his wife--the way someone who knows what answer he wants to hear, but not how to say what needs to be said--the following: “Hey, ugh, I just want to ask you. What’s...I’m just trying to figure out. What’s the deal with us? As…just…dating goes.” She asks if he’s met someone. He hasn’t, really. She proffers, “Maybe it would be healthy for us to...”

She doesn’t have to finish. That’s not the answer that he wanted to hear. Like many men would, he makes a quick escape before she can hear his heart breaking. Whatever the age, men always break alone.

My first thought, upon hearing Ray’s distinctive, Long Island accent was that Ray Barone, the character he made famous on “Everybody Loves Raymond,” had simply been transplanted to Los Angeles. That worry is dispelled when he assists an attractive female patron at his party supply store: they recognize each other from hiking. He’s surprised that she recognizes him, because, as he explains, he listens to his music while hiking. She responds coyly, “Listening to music doesn’t make you invisible.”

“Right, right, though sometimes you wish it did, right?” The line falls flat. It’s not funny as much as sadly revealing. Joe’s comment is the sort of thing a divorced man of a certain age blurts out when he no longer remembers how to banter with women.

The show rings true. In the first episode Terry, played by Scott Bakula (“Quantum Leap,” “Enterprise”) is nearly hit by an inattentive motorist. Joe clutches his iPhone and aims at the departing license plate, “I’ll take his picture. Hold on.” But then, “Wait, that’s us…I had it backwards.” Men our age have a tenuous grasp on technology.
When Joe tells one of his employees that he can’t listen to an iPod at work, the young man suggests how much better his music is compared to that being piped into the store, “Come on. Who is this lady singing right now?” “It’s Neil Sedaka,” Joe shoots back, “and he’s a classic singer.” Then, laconically, as though he’s already said it too many times, “Now put away the iPod and pull up your pants.”

By the end of the first episode, Owen has confronted his father; Terry, his bully; and Joe beats up an inflatable green Incredible Hulk. None finds the satisfaction they had sought, but I don’t think any adult viewer will find this show to be a disappointment. The series uses the Beach Boys’ “When I Grow Up to Be a Man” as a cover song. Perfect. No one dreams of growing up to become these three men, but then that’s the challenge of being a man of a certain age. Living with what we’ve become.

Terrance W. Klein is associate professor of theology at Fordham University and author of Vanity Faith: Searching for Spirituality among the Stars (2009).

Terry, thanks for the review. Though I imagine I may be a little younger than you (and younger still than the three male leads), the sentiment you expressed at the closing of the article rang true: "No one dreams of growing up to become these three men, but then that’s the challenge of being a man of a certain age. Living with what we’ve become."

I thought of the series as AMERICAN BEAUTY for TV.

I would disagree with you.    My husband (who is in the age range of the main characters) and I watched the first episode.  We both found it boring and pointless.  We did find it a big disappointment.    We will not watch it again.

Mr. Klein, I agree with your upbeat appraisal of "Men of a Certain Age."  Of course it's not "real" life.  If it were it would probably be too dull even for mass-market TV.  It strikes a balance between the humdrum of every-day life and the mind-numbing fantasies you mention of buffoon husbands and know-it-all wives so pervasive on tv.   I just worry it's so good that it can't last.  So many of the best efforts of TV producers have fallen by the wayside because of a lack of viewership numbers.