Looking Beyond Redemption: "Precious: Based on the Novel 'Push' by Sapphire" 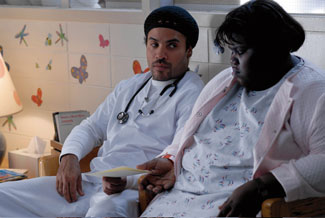 Searching for a way to understand the success of Precious, the remarkable and rather unlikely urban drama by director Lee Daniels, is so fraught with peril that one may as well begin with the film’s most banal aspect: the opinion of critics.

When the film debuted at the Sundance Film Festival in January, the reaction was favorable bordering on hysterical. But even the more starry-eyed optimists among the critics could consider the film’s commercial potential only with a dropped jaw: The story of a mountainous African-American 16-year-old? Who is pregnant for the second time by her own father? Who cannot read, barely speaks and is treated literally as a slave—with all the attendant and obvious racial echoes—by her monster of a mother? Who, if not for a miraculous portrayal by the comedian Mo’Nique, might have been a caricaturish affirmation of every racist, Reagan-era slur against publicly assisted African-American women and their children? Box-office success? Not in their wildest dreams. The film would be lucky to get out of Utah.

How wrong can one be? When “Precious” opened on Nov. 6, it earned an almost unprecedented $100,000 per screen in its limited release. Anointed by Oprah, bearing the imprimatur of the black-comedy mogul Tyler Perry and crowned by a New York Times Magazine cover, the Little Film That Couldn’t Possibly was wearing so much media bling it could barely move.

This doesn’t change the film, although it does change the perception of people (yes, critics are people) toward a movie that, at its very heart, is about what we see and how we see it, especially if what we are looking at is ourselves. That “Precious” would morph from critics’ darling to “mall movie” couldn’t have been Daniels’s strategy, but it adds an ironic twist to a film about a large black woman who, as she looks at herself in a mirror, fantasizes about herself as a skinny white girl—one of the screenwriter Geoffrey Fletcher’s more fearless adornments to the poet Sapphire’s book.

It also tests the capacity of the viewer for forgiveness: Who among us does not imagine him- or herself charitable, tolerant and willing to consider, in our ersatz-divine imaginations, redemption for even the most heinous among us? Mo’Nique’s Mary, guilty of the slow crucifixion of her own offspring, is the kind of character who pushes the envelope of empathy to the point of shredding.

The season of “Precious” has also seen the adaptation of “Where the Wild Things Are,” a movie based on a children’s book that upon its publication was critically attacked—don’t laugh—because its little hero was sent to bed without his supper. It is noteworthy how far movies have come in their delivery of “justice.” Crimes, including illicit sex, once demanded of the malefactors either redemption or death. The horror movie genre, in fact, still operates largely by that yardstick, especially if the crime comes early in the film. Traditionally, however, those who have grievously sinned are either dead or penitent by the time the end credits roll and, more important, the worldview of the survivors has been realigned and the moral universe set back in a comfortable spin.

Not so with “Precious.” The film resists being a fable, but can’t help it. Claireece Precious Jones is given a marvelously nuanced performance by newcomer Gabourey Sidibe, whose previous acting experience consisted of playing extras in college productions (a “Peter Pan” pirate at New York City’s Lehman College, for instance). But Precious is also a symbol in a movie that is as much a religious allegory as, say, Robert Bresson’s 1966 film “Au Hasard Balthazar.” In that classic, a donkey and a girl are, over many years, both cruelly and casually abused; in the case of the girl, a good man is rejected, and the girl actually chooses her abuser.

What Precious embraces, with echoes of Bresson, is the temporal world’s view of her, a view warped and refracted not by what’s she’s done, but because she’s a natural, acquiescing target. Her mother’s chief sin is a kind of moral sloth. Mary vents her own disappointments and grievances on her daughter, as if the daughter were no more than a donkey. One of the lessons of the profoundly Catholic Bresson was that there is room in God’s love for all creatures. Daniels’s message isn’t exactly the same; it is when Precious learns the lesson of self-worth that her fortunes and perspective change.

Her salvation comes through a teacher—movies love teachers far more than taxpayers do—with the heavy-duty name Blu Rain (Paula Patton). Ms. Rain is understanding, beautiful and a lesbian, perhaps in keeping with the movie’s understandably unfriendly attitude toward men, ameliorated somewhat by the appearance of the rocker Lenny Kravitz as a nurse in the hospital where Precious delivers her second child. In the narrative machinery of “Precious,” Ms. Rain is a weak cog, but Patton provides a welcome downpour of charisma onto the seared landscape of the film.

And Mary? It is tempting to say Mo’Nique gives one of the most wrenching, unnerving performances in the history of cinema, but such a declaration would expire of its own hyperbole. She lays bare a personality almost beyond the reach of common decency, adrift in a septic soullessness, but who can still exhibit enough of a glimmer of moral awareness that her pleas of innocence ring with a bilious hypocrisy. In the powerful soliloquy that serves as the film’s eerily subdued crescendo, Precious and her social worker, Mrs. Weiss, a virtually unrecognizable, pitch-perfect Mariah Carey, listen as Mary delivers her personal apologia. It is the kind of gut-wrenching confession that during an earlier time in movie history would have terminated in a storm of forgiving tears or the character dying on the spot.

“Precious” is, instead, a portrait of a soul poised on the edge of perdition and a universe with no reason not to give her a push. Given the easy righteousness we’ve come to expect at the movies, it is Mary—not Precious, for all her suffering—who represents the real horror of “Precious,” and who will haunt us, far beyond the palimpsest of her stricken image.

John Anderson is a film critic for Variety and The Washington Post and a regular contributor to The New York Times’ Arts & Leisure section.

I found "Precious" to be a briliant film, far beyond the usual fare in mall movie theatres.  The showing that I attended was almost full, with both black and white, young and old, attending.  Like a work of art, "Precious" shows us who we are.  Even Mary, when she said, "who is gonna love me?", was believable.