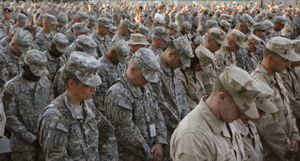 October proved a cruel month in our eighth year of war in Afghanistan. Fifty-eight Americans were killed, the worst monthly loss of life since the beginning of the war. It also could not have been welcome news to President Obama that a senior foreign-service officer, Matthew Hoh, a Marine veteran of two tours in Iraq, resigned on Oct. 26 in protest of the U.S. policy in Afghanistan, the first State Department official to do so.

“I fail to see the value or the worth,” Mr. Hoh writes in his resignation letter, “in continued U.S. casualties or expenditures of resources in support of the Afghan government in what is, truly, a 35-year-old civil war.” According to Mr. Hoh, the “Taliban resistance” the United States is purported to be suppressing actually breaks down into hundreds of small local groups, who perceive themselves as fighters not for the Taliban or an even more distant Al Qaeda but against the current occupiers, the United States and Afghanistan’s central government.

In a marvel of understatement, Mr. Hoh calls the Karzai administration an “unreliable partner” and writes that our Afghanistan strategy is destabilizing the entire region while making little progress toward its primary goal of protecting the West from the terrorist conspiracies of Islamic extremists. Mr. Hoh has thrown away what had been a promising diplomatic career in an effort to force his countrymen to ask some hard questions about Afghanistan: What are we achieving there? Do we have the ruthlessness and patience to stay in this fight? With our nation printing money to pay its bills, can we really afford to maintain this long war? President Obama’s long-awaited decision on Afghanistan may not answer all of Mr. Hoh’s brave but career-ending questions, but it should at least offer more than a general plan for muddling through in an ancient land that shows signs of developing into a Vietnam-style quagmire for the United States.

Every year the federal government loses some $100 billion in tax revenue to international tax cheating. That is a staggering sum, enough to pay for 27 months of the war in Afghanistan at the current rate of $3.6 billion per month. A recovery of eight years’ worth of these losses could pay for the entire health care reform package proposed by the House. Instead, year after year U.S. citizens hide their earnings abroad, and foreign firms earning money in the United States underreport or refuse to report their earnings.

Plugging the leak is the goal of a new bill sponsored by two Democrats, Charles B. Rangel of the House Ways and Means Committee and Max Baucus of the Senate Finance Committee. The proposed legislation would stiffen reporting requirements for foreign institutions that conduct business in the United States and those who advise U.S. citizens on investing abroad. The penalty for businesses that fail to comply would be a 30 percent withholding tax on income from their American assets. The I.R.S. is also more diligently tracking overseas investments.

Collection will not be easy. International financial information is difficult to track; tax rates and laws differ among nations. So much of the money owed the U.S. government will never be recovered. Were the Rangel/Baucus bill to pass, the expected recovery is a paltry $8.5 billion over the next 10 years—less than $1 billion each year. Surely a better means of plugging this leak needs to be found, and quickly, for global commerce and investment will likely increase, as will the number of artful dodgers.

One Laptop Per Child

“A chicken in every pot and a car in every garage.” Back in 1928 Herbert Hoover successfully used this adage in his presidential campaign. In this age of technology we have “One laptop per child.” The retiring president of Uruguay, Tabaré Vázquez, recently fulfilled his promise to give laptop computers to the 360,000 primary school students and 18,000 primary school teachers in his nation.

Making this possible is Nicholas Negroponte and his One Laptop Per Child program. Over one million machines have been distributed worldwide and another million are planned. In Rwanda 100,000 laptops are going to schoolchildren. Peru, Nigeria, Portugal, South Africa and Haiti are involved in supplying computers to their schoolchildren.

Challenges of cost, distribution, maintenance, training and content remain. But such challenges are part of any creative, far-sighted new program. As groups and nations argue the merits of One Laptop Per Child, the perennial debate about “guns versus butter” arises. Should swords be turned into plowshares or into food to feed the world’s hungry children? Why not into laptops? Might some small percent of the billions spent in Afghanistan and Iraq go to the distribution of these inexpensive computers?

The movement continues to grow, not replacing concern for child and adult literacy but expanding it to include technological literacy, which seems indispensable for success in the world of tomorrow. The One Laptop Per Child program is a welcome step in the right direction.

Show Comments (
2
)
Comments are automatically closed two weeks after an article's initial publication. See our comments policy for more.
david power
10 years 3 months ago
Interesting that America has not seen fit to commemorate the20th anniverary of the liberation of hundreds of millions of people.Two of the main protaganists in that liberation were Pope John Paul and President Reagan.I am sure it was a moment of great happiness to everybody that those who were under the jackboot of Moscow could pray in peace again.Why no articles?No Iconic photos?No effusive language about the great victory of the Christian tradition over the Marxist one?Are slavs not a cause celebre ?
Paul Louisell
10 years 3 months ago

I think our administration needs to define its goals in Afghanistan.  If it is to root out Al Kaida - a plan to do so should be devised and run by Congress for approval.  If it is to prevent terrorist organizations from being formed and trained in Afghanistan, then say so and work toward that end.  Is it clear that a Taliban controlled government would encourage Al Kaida or other terrorist groups to operate in Afghanistan?   If so, Obama should make his case to Congress and get the funding necessary to prevent that from happening.  If not, why are we asking 30,000 soldiers to risk their lives over there?

This article also appeared in print, under the headline “Current Comment,” in the November 16, 2009, issue.