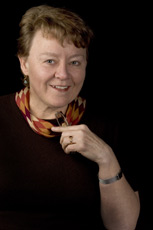 As a retiree, my mother finally has the time to indulge her contemplative streak. While I was growing up, she would rise at 5 a.m. to sit alone with her coffee, enjoy the quiet and browse the newspaper. After we bought a piano, she would play one unbroken improvised song, a progression of chords, for half an hour or more. To me it sounded like prayer, like Mary pondering all those things in her heart. I’d lie in bed and wonder at the songs my mom kept inside some deep interior well, there in the Arizona desert.

Externally, my mother led a busy suburban life, working full time and raising a family. Whenever she would finally join us kids of an evening to watch television, she’d fall asleep in minutes.

In her 60s my mother retired. Next thing I knew, she was taking painting lessons. The class painted exclusively from photos, so she was free to choose any subject that interested her. She made small renderings of birds, huge scenes of the Southwest, even a Lord’s Supper image. Obviously she had talent, but it was her enthusiasm we found so touching. I thought, finally she has time for herself. Then the gifts started coming. Over the years my mother would present to each family member and close friend a framed painting of a subject she had carefully selected, not for herself but for them. On she went, until she painted herself out.

My mother became a caretaker again, of her parents. They could no longer care for themselves in Ohio, so they joined their two daughters, who live a mile apart, in Phoenix until they died at 89 and 93. Then my mother and aunt lost their two brothers, leaving only the two of them. My mother came to terms with death. On a visit to my parents’ home, I noticed new objects from my mother’s family—a glass bowl, a knick-knack and several quilts.

My mother took up quilting, right where her own mother and grandmother had left off. To their hand-sewn piecework tops, she added batting and backing and “quilted” it all with a running stitch. She handed down three quilts, one to each child, a labor across three generations. Each quilt is a vivid example of patient love turned stitch by tiny stitch into a strong protective coverlet, practical enough to warm a family for decades, artful enough to decorate a room.

Two years ago my mother turned 80, wearing red at the party. But since then a series of falls, a broken bone and arthritis have put a crimp in her active lifestyle. She still drives, shops, goes online, consumes the news and sports, dances (with a cane handy) and keeps a neat house. She and my dad are mainstays at their local church, which specializes in ministry to seniors. But my mom nurtures her contemplative streak now.

Like an intrepid explorer, she sets out every morning to observe the universe from her patio. She looks at the sky and inspects her territory. Once she watched a hummingbird build a nest, which later fell to the ground. She examined every layer of it—bits of pencil plant used for the foundation, leaves of an artificial plant to line the nest—then she put it back. I stood on a ladder and found a tiny egg inside. “That explains it,” she said. “One parent flies over it every day.”

Limitations try to catch my mother, but she’s too attentive to get caught. What fascinates her are the little things—the birds, beetles and roses she never had time for. And she seems to be so keenly aware of her own mortality that she chooses to be ever affirming, as if to hand on to others her positive take on the world. In her wisdom, my mother is aging wakefully, demonstrating with her contemplative gaze just how it’s done.