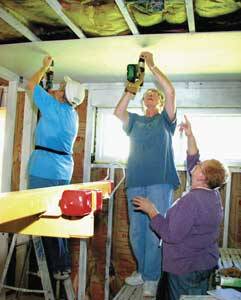 St. Vincent’s Affordable Housing in Santa Barbara, Calif., a project of the western U.S. province of the Daughters of Charity and Mercy Housing California, was named one of the nation’s best affordable housing developments by Affordable Housing Finance magazine. • Thousands of onlookers welcomed the relics of St. Thérèse of Lisieux to Westminster Cathedral in London on Oct. 12. • Blessed Teresa of Calcutta was “an Indian citizen and she is resting in her own country,” said a spokesperson for the Indian government, in response to a request from Albania to repatriate her remains • Nuns from congregations nationwide laboring for Nuns Build were swinging hammers and hanging wallboard on Oct. 5 to 9 in New Orleans homes devastated by Hurricane Katrina. • Pope Benedict XVI has awarded the Pro Ecclesia et Pontifice Cross for distinguished service to the church to Mother Mary Angelica, founder of the Eternal Word Television Network, and Deacon Bill Steltemeier, chairman of EWTN’s board of governors • The pope also named two prominent U.S. geneticists, Francis S. Collins, M.D., director of the National Institutes of Health, and Edward M. De Robertis, M.D., a professor of biological chemistry at the University of California at Los Angeles, to the Pontifical Academy of Sciences.