Skip to main content
Signs Of the TimesOctober 5, 2009 issue 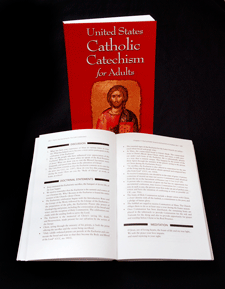 The Vatican Congregation for Clergy has approved a small change in the U.S. Catholic Catechism for Adults clarifying teaching about God’s covenant with the Jewish people. The U.S. Conference of Catholic Bishops announced in late August that the Vatican had granted its recognitio to a one-sentence revision of the catechism that was approved by the U.S. bishops at their meeting in June 2008. The revised sentence reads: “To the Jewish people, whom God first chose to hear his word, ‘belong the sonship, the glory, the covenants, the giving of the law, the worship and the promises; to them belong the patriarchs, and of their race, according to the flesh, is the Christ.’” The original sentence read: “Thus the covenant that God made with the Jewish people through Moses remains eternally valid for them.” In a statement, the bishops’ conference said that “the clarification reflects the teaching of the church that all previous covenants that God made with the Jewish people are fulfilled in Jesus Christ through the new covenant established through his sacrificial death on the cross.”