Looking for Love: What does suffering say about God?

Looking for Love: What does suffering say about God? 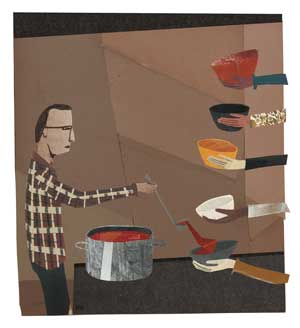 It was 4 a.m., and a new friend and I were finishing our third cup of French press coffee in a dusky room in downtown New York. Maybe it was the setting, maybe it was the caffeine, maybe it was the burgeoning friendship rising up in those wee morning hours, but I suddenly realized that our conversation was turning philosophical. He told me a big part of his life story: disillusioned by his divorced parents’ hypocritical profession of Catholic ideals, he left in the dust the church, his faith and God. Then, inhaling deeply from the cigarette he was holding, he studied me keenly before remarking, “So you believe in God. Explain to me, what is faith? How can you believe?” His question hit me between my unsuspecting eyes, and hard as I tried to divine the answer in the coffee grounds at the bottom of my mug, I could not find a satisfying response. I thought of his childhood, of his justified doubt and fell into silence.

A few years later, among sloshing piles of papers to be written and books to be read, I opened a letter from my longtime pen pal. Her previous reflections on time spent in Amsterdam had revolved around revelations of living alone in a foreign country, images of riding her bike along the canals, questions about her future. But this e-mail broke from the typical. She spoke of her horror at seeing neo-Nazis chant outside her local temple, of her familial ache when she passed signs over roads leading to concentration camps, of her disgust at being frisked before she could enter temple for worship. But it was the concluding line—capitalized for emphasis—that still haunts me to this day: How could God have let the Holocaust happen? I closed my computer and turned to the papers, as I waited unsuccessfully for the divine revelation I needed to answer her question.

Then there is the dump. On a recent trip to Nicaragua I came face to face with pain as I had never known it. I was there to study the policy and history of this economically impoverished country. My weeklong experience culminated in a trip to Managua’s nearly 70-acre dump, piled with cascading debris and lean-tos—homes constructed of salvage from the dump: brick, vending-machine siding and plain cardboard. Scattered among the families scrounging for valuables were the cattle owned by the dump’s landlord. The animals were kept among the refuse to remind the people living in the dump that while they were squatters, the animals actually belonged on the grounds. Not a single person I saw at the dump would look me in the eye. How could they? They were kept lower than the cows.

I wept that night. If there is a loving God, how could that God let those people live in such squalor?

The problem is, I don’t think anyone knows the answer to that question. The problem of pain, as C. S. Lewis so eloquently labels it, is a problem every believer must face at some point. It is the issue that validates doubt, that reverberates in more questions, that tempts faith. More than any other human experience, it is suffering that makes a case for atheism and shadows agnosticism. When we lovingly point a finger to the God who saves, the God who loves, that same finger can become a tool for blame because it seems evident that not all are saved, not all are loved. Given the suffering in our world, in our history and in ourselves, few attest unwaveringly that God is present in all that misery.

It is easier to believe God does not exist. But being resilient, we are not willing to give up a hope for better things. We look in the mirror and remind ourselves that we are not going to sit by and watch the world tear itself apart. We will live good lives, lives that alleviate the pain we see. So we join humanitarian aid campaigns, volunteer at the local soup kitchen and visit the sick. Prayers to a gracious God have become concrete moral acts that help our neighbor. We leave behind churches to lend a hand to addicts. God will not help, perhaps, but we certainly will.

Such a philosophical stance is not original. Take the work of Ludwig Feuerbach, the 19th-century author of The Essence of Christianity and an inspirer of Karl Marx. His book urged everyday people to take on what once was God’s role. Feuerbach wrote, “To will, to love, to think, are the highest powers, are the absolute nature of man as man, and the basis of his existence.” Not monopolized by God, these characteristics come to define humanity. We become, if we choose to take up our responsibility, perfected people no longer beholden to God for salvation. We have mistaken our own power for the power of a phantom God. It is not that God failed us. It is that we failed ourselves. We can come to realize that “the divine activity is not distinct from the human.”

His is a beautiful thought. If the divine activity is not distinct from the human, then what humans do can have the same characteristics as the divine, namely perfect reason, love, force of will. But few could attribute the Holocaust to such divine attributes. If humanity perfected is what we have erroneously labeled divine, then the question is not how God could have let that happen but how we could.

There’s the rub. Isn’t it intriguing that much of the pain we see is inflicted by one human on another? And we are supposed to be the true possessors of perfect reason, love and will. No, we are not perfect creatures maturing into our divine powers. Since Feuerbach’s optimistic proclamation of “holy” perfection in humanity, we have seen whole segments of humanity tumbling down into worse and worse conditions. One could argue that we, the generations after Feuerbach, have proved him wrong.

Yet a humanity-saving, selfless love—even between strangers—does exist in our world. How is that? Knowing the worst we are capable of, whether genocidal camps or weapons of mass destruction, we should not ask, How can God watch so much pain and stand by? but rather, Why is that we don’t just stand by? What is it inside us that makes us denounce pain and suffering and work to prevent and overcome it? There is selflessness in such empathy. It is a selflessness that does not come from the same creative place within humanity that dreamed up poison gas, torture or ways to dehumanize the poor. Knowing the worst humanity is capable of, we must admit that such uncharacteristic selflessness seems to come from something other than human. Something apart, beyond. Call it what you will. I call it God.

This case for God is not new. The writer of the First Letter of John tells us that God is love. It is not just a poetic metaphor for God. It is a case.

There is a difference between a proof and a case. While a proof can be laid out and argued over with some movement toward rationality, a case tends to speak beyond the merely intellectual. It speaks to experiences, to emotions, to those unarticulated whispers resting just behind your right ear. And while many good cases are built on sturdy proof, some are relegated to the abyss between reason and intuition. Stirring up sediments of dismissed reflections, these cases challenge us to explore new pathways into territories we might otherwise have sealed off.

St. John the Evangelist wields his one-word description as a case. And the best I can do in the face of suffering is to turn back to that beautiful and enigmatic case: God is love. It is only when I ask challenging questions and let them bounce off that particular description of God that I can begin to reach a glimmer of understanding. The problem of pain and suffering does not disappear, but the problem of love does. We may still have to face challenges from friends and from life itself, but at least now we face them from within this case. And who knows? Love just may be the strongest case we have.

This article also appeared in print, under the headline “Looking for Love,” in the October 5, 2009, issue.

M. M. Hubele, of Phoenix, Ariz., is a freelance writer with a background in interreligious dialogue.