Skip to main content
Signs Of the Times
August 31, 2009 issue 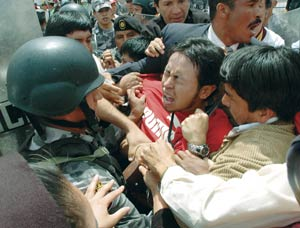 Recent events in several countries in South America perpetuate the turbulent pattern of progress followed by defeat that has characterized the long struggle for equality for the indigenous peoples of the Andean region. The native populations of Peru, Bolivia and Ecuador, like their counterparts elsewhere in the world, face endemic poverty, illiteracy, ill health and government neglect. In response, 143 countries voted to adopt the U.N. Declaration on the Rights of Indigenous Peoples in 2007. Still, according to advocates, realizing those rights in the daily lives of indigenous peoples will require much time and sustained effort.

Protest and response. In Peru, a government prosecutor filed charges on Aug. 12 against several government officials for their roles in a crackdown on indigenous protesters in the northern Amazon region on June 5. At least 24 police officers and 10 protesters were killed in the confrontation, and several hundred peoples were injured. The protests were “the latest part in a long history of resistance and accommodation between indigenous peoples and governments in Latin America,” said José Antonio Lucero, a professor at the University of Washington. “This is not a narrow question about a small swath of the jungle. This is a very profound question about what it means to be a citizen, what it means to have a democratic government, what it means to consult,” Lucero said. Protests had also occurred in Ecuador in the late 1990s and in 2007 in Bolivia, which a year earlier had elected an Aymara Indian, Evo Morales, as president. “I don’t think anybody has the magic recipe, but Ecuador and Bolivia have shaken apart the dominant idea that [indigenous] peoples are living in another age,” Lucero said.

Immediate causes. Many of the conflicts between indigenous peoples and their governments center on the environmental and economic impact of extractive industries like mining, oil drilling and logging, or the construction of large development projects like hydroelectric dams. “The Amazon has been important not for the peoples who live there, but for the resources that are there,” Lucero said. While government officials believe that these industries are important engines of economic growth, the indigenous peoples living near them do not seem to benefit and remain among the poorest communities in Latin America. In fact, government officials in Peru and Chile have referred to indigenous people as obstacles to development because of their proximity to these vital natural resources. In Ecuador, where the indigenous movement lost much of its political power after an ill-fated alliance with former President Lucio Gutiérrez in 2005, the current president, Rafael Correa, has done little consultation with indigenous groups about mining and petroleum, according to Lucero.

Consultation. An international treaty, the International Labor Organization Convention 169 (1989), calls for governments to consult indigenous people about development projects on their lands. Although such consultation is not binding under the pact, politically savvy indigenous groups throughout Latin America are increasingly using the treaty to pressure governments to listen to their views. Indigenous groups “want consultation to mean something,” Lucero said. “They want to be partners in decisions about how natural resources are used and to be part of the discussion about development.”

More countries are also enshrining in their constitutions the rights of indigenous peoples, although that is not an automatic stepping-stone to equality. Colombia was one of the first countries to spell out indigenous rights in its constitution, including a right to education. Still, illiteracy among indigenous Colombians remains at more than 30 percent, according to the United Nations. In Bolivia the government is in the process of implementing provisions of its new constitution that grant greater autonomy in governance and judicial procedures to indigenous peoples.

This article also appeared in print, under the headline “For Indigenous Peoples, Equality Is a Long Struggle,” in the August 31, 2009, issue.