Skip to main content
Of Many Things
August 17, 2009 issue 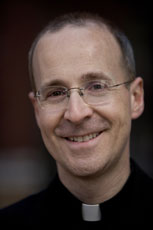 When I told a friend that Drew Christiansen, S.J., asked if I would be the magazine’s new “culture editor,” he smiled. “Will that mean you’ll have to wear an ascot and a monocle, go to the opera every night and change your name to something like Osgood St. John Montcreif?” I checked with Father Christiansen, who assured me it did not.

What it does mean is furnishing weekly articles on a variety of topics, as part of the magazine’s redesign. Avid readers now know to check the new “Books & Culture” section not simply for fine book reviews presided over by our literary editor, Patricia A. Koss-mann, but also for pieces on film, theater, television, fine arts, music, architecture, as well as two other loosely defined areas: “new media,” which looks mainly at Web-based media, and “ideas,” which addresses the intersection between culture and faith.

Part of the fun of editing the new culture section has been gathering a stable of talented writers. Starting out, we did not have far to look. One of our most popular writers is Richard A. Blake, S.J., the film studies professor at Boston College. He is still faithfully penning movie reviews for us, like our last issue’s look at “Public Enemies.” But he has now been joined by Richard Leonard, S.J., and Michael V. Tueth, S.J., scholars of film and communications who work, respectively, in Australia and New York. Leo J. O’Donovan, S.J., emeritus president of Georgetown University, has been handling many fine arts reviews; and the Revs. Robert Barron and Robert E. Lauder, two well-known Catholic writers on the arts, have been tackling “ideas.”

Too many priests and Jesuits, you say? Not so fast. One of our new theater reviewers, Rob Weinert-Kendt, who considered the Pulitzer Prize-winning play “Ruined” a few weeks ago, is a professional theater critic who has appeared in The New York Times and writes a blog called “The Wicked Stage.” And our literary assistant, Regina Nigro, has already contributed her youthful voice to TV reviews, having zeroed in on “How I Met Your Mother” and, coming soon, “Saving Grace.”

We are planning to balance “thought” pieces—like this week’s article by Father Leonard on Jesus and superheroes—with outright reviews. (Father Leonard’s doctoral thesis, by the way, was on mysticism in the films of the Australian director Peter Weir.) We want to surprise you, too. In the early fall, for example, you will read a conversation with Liv Ullmann about faith. (I just ruined the surprise.) And we’ll offer writers from beyond the boundaries of “Catholic Land.” Recently, Joyce Polistena, a world-class art historian, argued that the painter Eugène Delacroix, so long seen as “secular,” was deeply religious.

But there is more to the culture section than what you see in print. Using our Web site, we can not only provide more culture pieces overall (they’re usually posted on Fridays) but make them more timely. Sometimes a review of a new film arrives too late to run in America’s print edition. So we’ll direct you to the Web. And some clever “Web only” material, like the slide shows produced by our online editor, Tim Reidy, adds greatly to a review of an art exhibition.

Why have any of this? Because the arts are not only part of the human experience, and of an engagement with the modern world, but are also a primary way of experiencing God. What would our faith be without Giotto, without the Book of Kells, without Chartres, without the play “A Man for All Seasons,” without the film “Dead Man Walking,” without, well...culture? Immeasurably poorer. We hope to celebrate that spirit in America’s culture section. But without an ascot or a monocle.

Show Comments (
1
)
Comments are automatically closed two weeks after an article's initial publication. See our comments policy for more.
Edison Woods
11 years 2 months ago
I take a back seat to no one in my appreciation of the arts as a whole. I do so even though I am totally blind and therefore am somewhat hampered in my appreciation of them. This qualification having been made, I have to ask why do we pay so much attention to the film industry which has time and time again shown open hatred for Christianity? Is this wise? I only ask because it reminds me of our Lord's admonition against casting pearls before swine. I think Father Martin as cultural editor should at least acknowledge the fact that the film industry has been trying to rend the seamless robe of Christ for many a long day. Such an acknowledgement would at least justify in some small degree the waste of so much space in a Catholic news Magazine on the activities of a thoroughly secular industry.

This article also appeared in print, under the headline “Of Many Things,” in the August 17, 2009, issue.