The Controversy at Notre Dame

The Controversy at Notre Dame 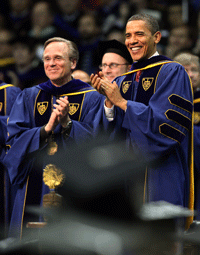 In the August 31-September 7 issue of America two bishops look back at the controversy surrounding President Barack Obama's appearance the University of Notre Dame commencement: Bishop John M. D'Arcy, of Fort Wayne-South Bend, and retired Archbishop John R. Quinn. America has published numerous articles and editorials on the controversy. A selection of our coverage appears below.

"Sectarian Catholicism," The Editors, May 11

This article also appeared in print, under the headline “The Controversy at Notre Dame,” in the August 17, 2009, issue.