Ready or Not...: My uncommon father

Ready or Not...: My uncommon father 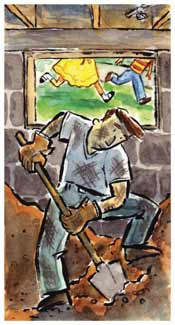 In our family album there is a picture of my Aunt Nell with Baby Richard on her lap, sitting at our kitchen table. If it weren’t for the photograph, I would scarcely believe that they and my Uncle Sam lived with us when I was 8. Presumably our two families cooked and ate together, washed and hung clothes on common lines, went shopping at the A&P, swam at Lewis Park and cooled ourselves on lawn chairs under the front shade tree. But I have no recollection of any of this, although a photograph verifies the shade tree. Nor do I remember my aunt crying of loneliness up in the back bedroom my parents gave them—only my mother’s telling me many years later that Aunt Nell was homesick for the Ireland she had left as a war bride.

All I remember of my Uncle Sam is the sight of him from the back, as he walked in his white shirt and dress pants down our front steps and past the shade tree on his way to night work at the telegraph company. In the yard he passed through the mountains of hard yellow dirt and rocks that my father dug and hauled, box by box, out of our cellar.

My father came home from the factory to work in the cellar, essentially a crawl space, while my uncle went to the telegraph office, and we children played hide and seek in the hills my father heaped outside our house. Over the months the mountains grew, the chasms deepened, and we discovered better ways to hide from each other. One lone voice cried loud and clear: “Apple, peaches, pumpkin pie, who’s not ready, holler I.”

Down in the cellar where he dug on hands and knees, my father heard the chant. Head to toe in soot and choking on it, the man in the black hole wanted to holler “I.”

With the whole house on his back, my father wanted to holler he was not ready, not for the four growing, jumping children playing on the work of his hands that could not work long and fast enough. By day he ran a punch press machine at the Auto-Lite Sparkplug factory. On Friday nights he set up pins at the bowling alley; Saturday nights he stocked the A&P shelves.

He wanted to holler not ready when his wife roamed the block in her nightgown, then settled on the lawn across the street and waited for the Sears truck to deliver the new refrigerator she had decided to order for the neighbors.

My father wanted to holler not ready, but there was no time, no time at all the afternoon he keeled over in front of the television set. All he had wanted to do was raise the volume on a Yankees game.

But it’s ready or not, here I come.

One day a few years before he died, I baked my father three pies—apple, peach and pumpkin. We sat at the table down in the basement he had carved out of the earth. He had since poured a cement floor and spread out hunks of old kitchen linoleum like chapters of family history under our feet. The walls were the same unfinished grey blocks they always were, but my father had installed a washer, dryer, stationary tubs, the stove he used for canning the tomatoes he grew and a bronze crucifix above the stove.

My father had no idea that all of his life he had personified the saving love of the figure on the crucifix for us. The twisted hands and bent body were the same. So were the lessons they taught: to dig deep, to lay a firm foundation, to treasure the old even as the new moved in upstairs, to see with simple eyes of faith. Such comparisons would have puzzled my father. Perhaps it was enough that I told him that he was not the common man he liked to say he was.

That day my father put his canning materials aside to make space at the kitchen table, which served quite well in the basement. He pulled up two stools and waited.

I spread out the three pies I had baked, cut my father a slice of each, and served him on three separate plates. “Abbondanza!” he cried, his face shining. Such abundance there in the basement.

Relishing the moment, he tried a little of each pie, his elbow on the table and the fork in midair, waving a little, as if he were pondering. At the end, he gave me one of his crafty smiles, lowered the fork and pointed, “Here’s the winner.”

No contest, really. And we both knew why: the peaches were from his trees.

Bravo, Sister. Such dense, earthy, redolent images of sacrifice.  As one whose 86-year old father is in the early stages of "cognitive impairment," I say thank you. I can see it all, there in your basement. You transported me to a buried memory of my father, drenched in sweat, working on his boat. I'd forgotten those late nights, under the worklight, readying the boat for our next family outing. I will thank him tomorrow for the example he set. Well done!

Thank you for the beautiful  Father's Day  Tribute.    What struck me most was  your  Dad's   acceptance of
his  "state in life"....No complaining.....Total focus  on making  a decent and happy  life  for himself and his family.
A reminder to me  to thank God  often  for  my   Parents,  who  lived and  worked  so  selflessly   for
us  Eight  kids in  the same era,

Joan Sauro, C.S.J., a teacher of literature and workshop leader for adults and children, is an award-winning author and illustrator. She lives in Syracuse, N.Y.