Skip to main content
Signs Of the Times
June 8, 2009 issue

High Casualties From Use of Banned Arms

High Casualties From Use of Banned Arms 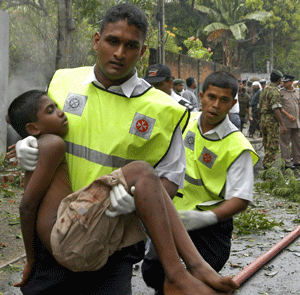 Sri Lankan government forces killed or injured 25,000 to 30,000 civilians in the span of just a few days during its final offensive against Tamil militants, say humanitarian workers. One worker said that the high number of casualties was caused by “a generous use” of weapons, such as cluster and chemical bombs, which are banned by international treaties. Today the conflict zone of Vanni “is like a burial ground, nothing left behind, no buildings, no churches, utter destruction,” he said. The aid worker said he could speak only on condition of anonymity because he was an eyewitness to numerous atrocities carried out against civilians in the battle zone. He worked for an international humanitarian organization and had been serving in Sri Lanka’s Vanni district for more than a decade until he fled in mid-May at the height of the Sri Lankan military assault against the last Tamil-held areas in northeastern Sri Lanka.

This article also appeared in print, under the headline “High Casualties From Use of Banned Arms,” in the June 8, 2009, issue.