Too Big to Bail

Too Big to Bail 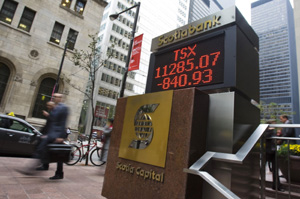 Despite the Obama administration’s optimism about the state of the economy, numerous voices and indicators suggest that its main goal, to restabilize the major banks, is neither sufficient nor proper to the problem at hand. The ongoing bank bailout shows no signs of ending soon or of resulting in reform of the sector. Much more serious structural adjustment is necessary, including the orderly failure of some banks.

The Dow Jones industrial average has steadily risen in recent months. Yet the basis for confidence remains unclear. Unemployment continues to rise, the American automotive industry is in tatters, waves of mortgage defaults threaten to bring down small and mid-sized banks, and the economic situation in other parts of the world could very well undermine the world economy further. In a recent article in The Wall Street Journal (5/18) investors interviewed said their increased investments were based on a sense that things were getting “less worse”—not better, but worse at a slower rate. But even these investors signaled that more substantial signs of improvement were required before further investment of any size could occur.

The Obama administration has found reasons to be encouraged in recent months, especially after the recent “stress test” of the banks. Federal demands that certain banks increase the amount of cash they have on hand is an important step toward ensuring their stability; yet as a whole the recent “stress test” appears to have evaluated more their ability to handle mild indigestion than actual stress. The fact that the banks themselves were given some say in how government regulators reported their condition likewise undermines the report’s (and the government’s) credibility. It also points to the truth-is-stranger-than-fiction reality that the very men and women who caused the world financial crisis, whose decisions led to the loss of trillions of dollars and millions of jobs worldwide, continue to do as they please.

Today taxpayer dollars are being spent by bailed-out banks not simply on the bailout, executive salaries and bonuses, but also for lobbying against measures that would protect ordinary people against bad bank practices. Taxpayer bailout money, for instance, helped kill anti-foreclosure legislation that would have allowed judges to revise the terms of unaffordable mortgages. Likewise, in the wake of the passage of the credit card reform bill (against which the banking industry lobbied), some banks have begun spreading the word that they will begin to charge for the use of their cards, yet another way to pass financial responsibility for their mistakes back onto the taxpayers.

Meanwhile knowledgeable economists of various schools of thought continue to insist that the government goal of saving all the banks is neither realistic nor useful. Paul Krugman, winner of the Nobel Prize in economics and a columnist for The New York Times, has described the government’s approach as a new kind of voodoo economics, in which impenetrable financial rituals enable bankrupt banks to continue as institutional zombies, reanimated corpses with no long-term ability to provide for themselves. Another Nobel Prize winner and a former chief economist of the World Bank, Joseph E. Stiglitz, likewise recently said in testimony before the Joint Economic Committee of Congress that the proper question is no longer whether some of these banks are too big too fail, but whether they are too big to save. And Simon Johnson, former economic counselor and director of the research department at the International Monetary Fund, wrote in the May issue of The Atlantic that the current economic situation in the United States closely mirrors the dynamics of the failed economies the I.M.F. regularly encounters in the developing world. The main difference is that in a developing economy, structural change does eventually come, because the government runs out of money. The far deeper pockets of the United States Treasury, on the other hand, are allowing the government to avoid these tough choices. Johnson also believes that bad banks, lacking that financial imperative, are likely to bleed the country and hamper recovery for quite a long time.

Today some banks are holding the government and the country hostage: Continue to bail them out both with money and positive spin, they threaten, or they will bring the economy down. But the orderly, regulated failure of these banks is an important part of economic recovery. It is also a step in the reform of the banking industry. The failure of risky and dishonest practices encourages better practices in the future. President Obama came into office insisting that we need not be trapped in old models, that we can and should think outside the box, that we can make a difference. As for the banking industry, the time has come for the administration to demonstrate that leadership in action.

Show Comments (
4
)
Comments are automatically closed two weeks after an article's initial publication. See our comments policy for more.
JOSEPH D'ANNA
11 years 4 months ago
Allowing the failure of more poorly operated banks and AIG might have been, and might still be, in the nation’s best interests. In the case of AIG, the government (we) could have chosen to underwrite more traditional operations, whereas high risk, second party bets on the failure/success of other institutions/businesses could been allowed to take their natural course – a la Las Vegas. So long as these institutions remain “too large to fail” we will always be on the hook. Geithner and Bernanke may be men of integrity, but they have too many friends in the banking and finance sectors to objectively look out for our interests. Additionally, they and President Obama appear to be overly-concerned with preserving the image of the United States and in pacifying our foreign creditors. Propping up the financial sector is only buying the United States time to re-establish a more self-sustaining economy that does not require constant deficit spending; it will not solve our economic problems. The administration, to its credit, appears to recognize this reality.
11 years 4 months ago
The writer's conclusion is crystal clear - get the government out of the business world, something it knows very little about, at least until it learns how to do what it is supposed to de, which is run the government. If each bank had been concentrating only on staying in business by doing a good job for itself and its customers instead of aiding and abetting the government's political agenda the ones who would have stayed in business would have been the ones who should have been in business all along, not the ones with friends in the White House.
11 years 4 months ago
The government does not belong in the business world. They know little or nothing about it. Look at the waste in the government.Their mission is to find and prosecute the people who cause this problem but let a business that has not been run properly fail so if possible it can start over. The administration should cease payback to Friends and unions.
DONALD RAMPOLLA
11 years 4 months ago
I don’t minimize the seriousness of our current economic situation, especially for severely impacted individuals and families. But I think we need to look at the positives of our nation, namely the human and natural resources that we have that give us the capability to get out of this mess. Here’s one way of putting it. GOOD NEWS FOR AMERICA AND THE WORLD Despite economic problems here's what we have in America 1. Land and water and agricultural expertise to feed more than twice our population. 2. Coal and natural gas to provide energy for 300 years 3. Forests to provide building materials forever 4. The worlds most highly educated population 5. An outstanding system of schools, from primary through graduate and medical 6. An army of highly trained medical professionals 7. 240 million adults with the vast majority talented, hardworking, honest caring. 8. The most open and tolerant society in the world. 9. A military that keeps us as secure as anyone can be in this world. 10. A political system that has maintained stability for over 140 years. 11. Thousands of healthy and well run financial institutions. 12. An incredibly effective nationwide transportation system. We have everything we need and more to make America the beacon of democracy the city shining on a hill ten thousand points of light the engine of the worlds economy the bread basket of the world. In view of all these positives, whatever problems we have we can and will solve. LET'S MAKE UP OUR MINDS AND HEARTS TO JUST DO IT. Most of us are not major players in policy decisions. So what can we do? I propose for starters we follow the spirit of John the Baptist in Chapter 3 of Luke; do the best possible at whatever job we have, and share with those who have less. Beyond this, advocate for and support legislation designed to promote the common good. Regarding the conclusions about what we can be, yes they’re all clichés, but that doesn’t mean they’re devoid of truth. I’m absolutely convinced that if we believe we can do it, we can do it. Also, I’m absolutely convinced that if we believe we can’t do it, we can’t. Here’s a comment on the following statement which you attribute to an expert “… the current economic situation in the United States closely mirrors the dynamics of the failed economies the I.M.F. regularly encounters in the developing world”. In view of the positives of our nation, I suggest strongly that to liken us in any way to a developing world economy is extremely misleading. In summary my plea is that we all start to think and act positively. 1. We have enormous human and natural resources. 2. Believing that we can accomplish great things will enable us to accomplish great things.

This article also appeared in print, under the headline “Too Big to Bail,” in the June 8, 2009, issue.