Ave atque Vale: The case for replacing Latin as the official language of the church 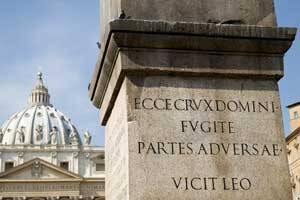 Latin is the official language of the Holy See and the Vatican City State, but the working language of the Vatican is Italian. Given its location in Rome, the Vatican’s use of Italian makes perfect sense. As for Latin, though, fewer and fewer seminarians and priests today are familiar with it, and laypeople seldom study it; but official church documents are still published in Latin.

Latin remains essential to the church’s tradition and identity. Anyone who wants to study canon law or to understand great Catholic thinkers, like Augustine or Thomas Aquinas, needs a good working knowledge of the language. As the Papal Latinist, Reginald Foster, O.C.D., puts it: “You cannot understand Saint Augustine in English. He thought in Latin. It is like listening to Mozart through a jukebox.”

None of this necessarily means that Latin should continue to be the official language of the church.

The question of language arouses emotional resonances linked to questions of history and identity. The European Union, for example, recognizes 23 official languages, including Irish, which is spoken as a first language by fewer than 50,000 people. In principle, each E.U. language has official status; but in practice, without any official pronouncement to this effect, English has become the working language of the European Union. In some member states English is no longer considered a foreign language. More and more European companies have made English their official language.

Does tradition require the Vatican to retain Latin as its official language? In fact, the opposite is true; retaining Latin defies the whole dynamic of its history. The widespread assumption that Latin has always been the language of the Catholic Church is mistaken (in this article, Iuse the term Catholic Church as synonymous with Roman Catholic Church). The assumption arises from the fact that Christianity was born during the reign of the Roman Empire. Today the received wisdom among a small but vocal group of Catholics is that the church, being based in Rome, inevitably promulgated its dogmas and conducted its liturgies in Latin. In their view, the decision of the Second Vatican Council in 1964 to allow and encourage the use of vernacular languages, however, led to further erosion of authentic doctrine and practice. For such people, the restoration of Latin would return the church to the internal discipline and high moral high ground it so unwisely surrendered.

Why the Church Chose Greek

The historical facts are quite different. Christianity at its origins made a surprising decision: it adopted Greek as its language. The earliest documents of the Christian community were written in Greek. Although Greek was the language most Christians used among themselves, it would have been easier in many ways had they made Hebrew the church’s official language. After all, Hebrew was the revered language of the Jewish Scriptures and the language in which God first revealed his love to the chosen people, and the very earliest Christians (the Apostles) were predominantly Jewish. Yet the church’s surprising decision to switch to Greek paid enormous historical dividends.

The church produced its most creative theology during its first millennium, because it was audacious enough to take Greek as its language. It took the best from the Greek world of Socrates, Plato and Aristotle and brought it together with the wisdom of Judaism. This development of the church’s theology can be traced through the seven major ecumenical councils, starting with the First Council of Nicaea in 325 and culminating in the Second Council of Nicaea in 787. All of these defining gatherings of the Catholic Church in the first millennium were held in what is today modern Greece and Turkey. Most of the participants in these councils came from the Eastern or Greek part of the Catholic Church. Every one of these seven councils was conducted in Greek, and all the decrees were issued in Greek.

Given the historical importance of Greek in the first centuries of Christianity, it is surprising today to encounter zealous young seminarians and priests who are enthusiastic about Latin, thinking it is rooted in a 2,000-year-old connection with the church. They imagine they are returning to the genesis of Christianity, but they have unknowingly erased the first centuries of church history.

Such selective amnesia was also evident in Mel Gibson’s controversial film “The Passion.” In the film Gibson has the Roman soldiers speaking Latin, a historical blunder. Was Gibson led to this mistake because of his attachment to the Latin Tridentine liturgy and the conservative Catholic lens through which he views early Christianity? Scholars agree that the common language of the Roman Empire in the Middle East was Greek. Greek was, in fact, widely used in Italy and Rome at the time of Jesus. There is little doubt that Pilate and Roman military officers garrisoned in Palestine would have been Greek-speakers.

The Switch to Latin

In the fourth and fifth centuries Latin replaced Greek as the language of the Mass. This shift was a brave response to the changing times. First, the church had come to recognize that the center of Christianity was in Rome. Latin was the language of that city and the language of the world’s major power at the time, the Roman Empire. Second, the church recognized that Latin was the lingua franca throughout western Europe, and it wanted to reach all the people there. The decision to take on Latin had major ramifications: By identifying with the Roman Empire, would the church appear to endorse imperialism? Why would it throw in its lot with the Roman Empire, which in many respects was antithetical to Christian ideals and values? Would it be more appropriate to retain Greek?

Yet Latin won the day. One can recognize the great potential of Latin simply from observing the beauty and economy of this most resourceful of languages. The very structure of Latin gave new clarity and precision to the teaching of the church. Although common or “vulgar” Latin deteriorated into a series of dialects that were to become the basis of languages like Italian, French, Portuguese and Spanish, classical Latin itself remained unchanged. Since it was no longer used daily, this more refined Latin was not subject to alteration. It thus provided the Catholic Church with a stable norm by which to evaluate the correctness of doctrinal and theological expressions in other languages. For centuries, Latin continued to be a critical point of reference for the Catholic Church.

A Case for English

Has the time now come to change the official language of the church to English? Introducing English does not mean jettisoning Latin. Latin has been around for a long time, and long may it continue. The Catholic Church, because of its universality, should be able to draw on the rich storeroom of tradition. But perhaps it is time for the official status of Latin to correspond to its actual use.

There would be many advantages to the adoption of English as the official language of the Roman Catholic Church. First, English is already spoken across many different nations. It is the official language of roughly 50 countries worldwide and is used at least to some degree by almost two billion people. Second, English is an extremely flexible language: many nouns can be used as verbs—for instance “mention,” “book,” “proposition”—or as adjectives, as in “vegetable soup.” English incorporates new words and expressions to respond to cultural shifts and changes: “information superhighway” or “search engine.” Third, English is an extraordinarily inventive language. New words and expressions are continually being coined: bad hair day, carjacking, road rage, soccer mom. The language never stops venturing into new territory. As such it is ideally suited to our constantly changing world.

In the medieval world, Latin enabled the church to shape the contemporary intellectual culture in a decisive way. Could English provide a similar resource for today’s church? It may be time for the church to make a brave linguistic leap of faith. As Virgil once wrote, Audentes fortuna iuvat: “Fortune favors the bold.”

Thomas G. Casey, S.J., an Irish Jesuit priest, is a professor of philosophy at the Gregorian University in Rome and, most recently, visiting professor at the Hebrew University of Jerusalem. His most recent book is Music of Pur

Alan Aversa
9 years 3 months ago
The Baltimore Catechism says this about Latin: Q. 566. Why does the Church use the Latin language instead of the national language of its children?
A. The Church uses the Latin language instead of the national language of its children:
Switching to English would not preserve any of these points.
Bruce Snowden
9 years 3 months ago
I greatly respect scholarship wherever I find it, even when not fully understood, or even when not understood at all. To me, scholarship possesses an aura of holiness easily linked to God, who is All Wise, All Knowing, All Understanding. As with approaching God, approaching scholarship must be done with reverence, even when "profane" looking for that "grain of truth" the redeeming factor in all scholarship. Is it not true that even Satan can speak the truth? So, I reverently acknowledge having read "Ave atque Vale" which has made me wiser, more knowing, more understanding. For whatever its worth, respectfully, let's stick with Latin as the Church's official language, a stable teaching tool not subject to developmental change. But in liturgy let's do vernacular, keeping some Latin hymns of course which are exquisitely beautiful many from Aquinan genius. A priest friend once told me, praying in Latin was for him like praying to an unknown God in a foreign tongue! I agree.