Scripture Alone?: Rethinking the homily as a liturgical act 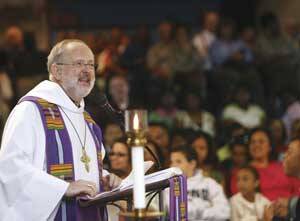 The idea of preaching without Scripture may seem preposterous, but I suggest it just the same, as a way of drawing attention to a little known, much less accepted, mainline teaching of the Roman Catholic Church about preaching and Scripture. I offer these comments specifically about the homily at Mass, which is a particular and canonically defined genre of preaching, and which many Roman Catholic priests and deacons think must always be rooted in and focused upon the Scriptures. In fact, it need not always be so.

Let's start with the basics. The Second Vatican Council, in its first promulgated document, the "Constitution on the Sacred Liturgy,” was adamant in its directives about the role of Scripture in the reforms of the Mass. It directed: "The treasures of the Bible are to be opened up more lavishly so that a richer fare may be provided for the faithful at the table of God's Word” (No. 51). This is not only a theme that is sounded on the surface of documents like the "Constitution on the Sacred Liturgy” and the subsequent "Dogmatic Constitution on Divine Revelation” it is a concern for the biblical foundations that lie at the heart of virtually every document of Vatican II. Whereas Vatican I was more inclined to cite church teaching in support of some conciliar assertion, Vatican II shifted into a more biblical mode:it persistently cited biblical text after biblical text in support of its dogmatic and pastoral directives. While some of this, unfortunately, was no more than proof-texting, the overriding message of the documents of Vatican II is that scriptural grounding is important, definitive and essential.

At the same time, nowhere do the documents of Vatican II teach or require that one must always preach about or from the Scriptures. While the "Dogmatic Constitution on Divine Revelation” indicates that preaching must be "nourished” by Scripture (Nos. 21 and 24), that is not the same as saying one must explicitly preach about a particular biblical text. Direction here comes from the "Constitution on the Sacred Liturgy,” which teaches: "By means of the homily, the mysteries of the faith and the guiding principles of the Christian life are expounded from the sacred text during the course of the liturgical year” (No. 52).

What Is This 'Sacred Text’?

Many are inclined instinctively to interpret "sacred text” to mean Scripture. But the Holy See, in its definitive interpretations of that phrase, did not come to the same conclusion. Even before the close of Vatican II in 1965, the Vatican began issuing definitive interpretations of the council's documents. There have been five of these to date. The first (the instruction Inter Oecumenici) was issued in Sept. 1964 by the Sacred Congregation of Rites. It offered a definitive interpretation of the phrase "sacred text”: "A homily on the sacred text means an explanation, pertinent to the mystery celebrated and the special needs of the listeners, of some point in either the readings from sacred Scripture or in another text from the Ordinary or Prayer of the day's Mass” (No. 54). Notice the word "or.” This definitive interpretation of Vatican II makes it clear that authentic liturgical preaching does not require (nor does it exclude) always preaching explicitly from the Scriptures. At the same time, it recognizes that "sacred text” has a broad meaning in the history and theology of Roman Catholic worship.

This basic understanding of the homily as related to the Scriptures or some other liturgical text has been repeated in subsequent, significant documentation. I cite four examples.

• The 1983 Code of Canon Law relies almost verbatim on this instruction when it notes that the homily "is a part of the liturgy itself...in the homily the mysteries of faith and the norms of Christian living are to be expounded from the sacred text throughout the course of the liturgical year” (Canon 767, 1).

• The General Instruction of the Roman Missal (2002) explains the homily in this way: "It should develop some point of the readings or of another text from the Ordinary or from the Proper of the Mass of the day, and take into account the mystery being celebrated and the needs proper to the listeners” (No. 65).

• The Introduction to the Lectionary presents the homily as based on the "sacred text” broadly defined. In particular, it notes: "Whether the homily explains the biblical word of God proclaimed in the reading or some other texts of the liturgy, it must always lead the community of the faithful to celebrate the Eucharist wholeheartedly” (No. 24).

• The U.S. Conference of Catholic Bishops goes further. In its 2003 Introduction to the Order of Mass, it not only repeats the instruction that in the homily "the mysteries of faith and the guiding principles of Christian living are expounded most often from the Scriptures proclaimed” but then adds "but also from other texts and rites of the liturgy” (No. 92). It is appropriate to preach not only about the eucharistic prayers and orations, but also about the central ritual actions, like the act of receiving Communion, the setting of the table or the act of being sent at the end of Mass.

From my perspective, one fundamental Roman Catholic principle and two critical pastoral realities are jeopardized whenever we lose sight of the broad invitation to preach the liturgy, not simply to preach the Scripture readings that are integral to the liturgy.

First at stake is an appreciation of a fundamental principle&ampampmdashit is the liturgy that determines the readings, not the readings that set the feast. History teaches us that it was the emergence of feasts and seasons that determined which readings were to be proclaimed at Mass it was not the other way around. This principle is still with us, which is why the General Instruction of the Roman Missal indicates that for a serious pastoral reason the readings may be changed (Nos. 359-60).

A telling example of this principle is played out in the Rite of Christian Initiation of Adults. The rite indicates that the Cycle A readings are not only suitable for all three Lectionary cycles for the Sundays of Lent if one has candidates for Easter baptism, but that if the scrutiny rites are celebrated outside of Lent, the readings of Cycle A are still used (No. 146). Thus if a parish is celebrating adult initiation on the feast of Christ the King at the end of November, for example, the readings of Cycle A from Lent are proclaimed on preceding Sundays. This is what the liturgical writer Fritz West calls the "Catholic principle” (Scripture and Memory, Liturgical Press, 1997): the season and celebration set the text. This is why at every "occasional service” in the context of a Eucharist, such as a wedding or funeral, the event determines the readings, not the other way around. When texts are employed to determine the season or celebration, West deems it the "Protestant Principle.”

Second, too narrow a focus on the Scriptures puts at risk a homilist's ability to "preach the moment” for an assembly, deploying the full range of the liturgy's power to take into account what the General Instruction calls "needs proper to the listeners.” After the terrorist attacks on Sept. 11, 2001, America ran a story reporting that some clergy did not preach about the event because it was not in the Scriptures for the following Sunday (Don Heet, "Preaching From the Sacred Text,” 11/26/01). Even more striking was a deacon's letter to the editor in response to the article (2/4/02): "Our training is at least partially responsible for our good and bad performance. It is so ingrained in me to preach from the [scriptural] text and only from the text that I rarely consider the possibility of doing something else!”

When clergy are so tied to a scriptural text, where can they find the grounding to preach about crises confronting the people in the pews? Sometimes it can be found in the Scriptures of the day. In the face of 9/11, for example, Catholics could have prayed and preached on the church's second eucharistic prayer for reconciliation, with very powerful results: "Enemies begin to speak to one another, those who are estranged join hands in friendship, and nations seek the way of peace together. Your Spirit is at work when understanding puts an end to strife, when hatred is quenched by mercy, and vengeance gives way to forgiveness.” Preaching in the face of the current financial, housing and unemployment crises could also be enhanced if a homilist digs into the rest of the liturgy as a preaching resource.

Third, at risk from an exclusively scriptural foundation for preaching is the power of the Catholic imagination. If theologians like the Rev. David Tracy and Mary Catherine Hilkert, O.P., and social scientists like the Rev. Andrew Greeley and Robert Bellah are to be believed, Roman Catholics have a particular form of "analogical” or "sacramental” or "liturgical” imagination. Various studies and surveys have documented that the sacraments and sacramentals are a fundamental reason why Catholics stay in the church. These nourish the religious imagination that sustains belief. In his well-documented study of young adults, Dean Hoge found that participants rated the mediation of God's presence in the sacraments as the first essential element in their Catholic identity (Young Adult Catholics, Univ. of Notre Dame Press, 2001). This incarnational aspect of the Catholic imagination is so strong that pastoral ministers commonly comment on the number of people who show up when ashes or palms are given.

If such sacramentals are the instinctive center for the Catholic imagination, then it is most appropriately engaged by preaching that proclaims the whole liturgy. To do otherwise, and especially to preach only on the scriptural texts, is to preach to what Tracy and others would consider a "Protestant” imagination.

According to the "Constitution on the Sacred Liturgy,” "the liturgy is the summit toward which the activity of the church is directed it is also the source from which all its power flows” (No. 10). That statement is consonant with an understanding of Christianity in which the church was born around the Lord's table and the many tables of his followers after his death and resurrection. So Pope John Paul II, relying upon the insight of Henri de Lubac, S.J., could begin his final encyclical, Ecclesia de Eucharistia, by declaring, "The Church draws its life from the Eucharist.” Preaching should draw its life from the Eucharist as well. While the eucharistic liturgy is shot through with biblical imagery and language, the Eucharist is a distinctive source of Catholic doctrine, religious faith and sacramental imagination.

Preaching, particularly in the distinctive form of the homily, should both respect and engage the whole of the liturgical resource, including the Scriptures as they are mediated in the Lectionary. Such is authentic Roman Catholic preaching, an informed preaching that Catholics deserve and need.

Edward Foley, O.F.M.Cap., is director of the ecumenical doctor of ministry program and professor of liturgy and music at Catholic Theological Union, Chicago, Ill.