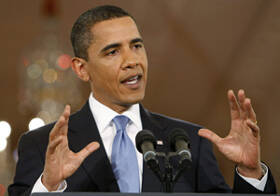 President Barack Obama inherited in January a foreign policy almost as universally unpopular as the H1N1 virus. With few notable successes, such as his admirable effort to combat AIDS in Africa, Mr. Bush’s bellicose foreign agenda, rooted in the dangerous delusion of American exceptionalism, had alienated most of the world. What the new administration needed to do immediately was change the tone, extend an open hand and proffer some plain old courtesy to a weary world. Mr. Obama has done this and more, adding substance to style with hints at meaningful, constructive changes in U.S. foreign policy.

In his first 100 days, the president aggressively pursued public diplomacy. Almost at once, he reached out to Iran through an unprecedented video message and with subtler, but more important signals, like referring to the country by its proper name, “The Islamic Republic of Iran,” thus hinting that the United States may abandon its misguided goal of forced regime change in Tehran. Iran, for good or ill, is a democracy, albeit an unhealthy one. If the United States is to prevent a nuclear-armed Iran from causing a regional cataclysm, it must negotiate as one sovereign state to another.

At the G-20 Summit in London in April, President Obama met with Russia’s President Dmitri M. Medvedev and began to mend that tattered relationship as well by indicating the possibility of compromise on such issues as the United States’ unpopular (and unnecessary) missile defense system in eastern Europe. Unlike his predecessor, Mr. Obama realizes that the cold war is over and that if hot wars with countries like Iran are to be avoided, the United States will need a multistate diplomatic effort with the help of other leading nations like Russia.

Closer to home, Mr. Obama’s trip to the Summit of the Americas signaled to a skeptical Latin America that the United States may finally put its gunboats into drydock. The president announced the repeal of overly punitive regulations regarding travel and remissions to Cuba. His choice to greet Venezuela’s Hugo Chávez at the summit with common courtesy was appropriate, though it inevitably drew the fire of the right wing commentariat. Former Vice President Dick Cheney, refusing to fade away gracefully, said that it made the United States look weak. Pat Buchanan charged the president with selling out the interests of the United States. Mr. Obama’s reply? “Venezuela is a country whose defense budget is probably 1/600th of the United States.... It’s unlikely that as a consequence of me shaking hands or having a polite conversation with Mr. Chávez that we are endangering the strategic interests of the United States.”

Mr. Obama’s gestures are welcome. The president has introduced a note of civil but meaningful engagement that has been missing from U.S. diplomacy. This is a practical necessity. It is plain that the alternative approach of all stick and no carrot, which has characterized much of American foreign policy in recent years, has yielded little more than a world full of enemies. Yet this style of diplomacy also has a moral dimension. As Pope John XXIII wrote in Pacem in Terris: “By establishing contact with one another and by a policy of negotiation, nations will come to a better recognition of the natural ties that bind them together as men. We are hopeful, too, that they will come to a fairer realization of one of the cardinal duties deriving from our common nature: namely, that love, not fear, must dominate the relationships between individuals and between nations.”

It is clear, however, that Mr. Obama will need to match his style with greater substance: real, game-changing moves that will assure the world that the United States has settled on a different, more cooperative form of leadership that has a greater chance of effecting a truly peaceful world. We still await meaningful changes, like lifting the Cuban embargo and allowing the free flow of trade and people between the two countries in the hope of opening up Cuba’s political system. We also look to the president to begin a credible and vigorous attempt to restore the nuclear nonproliferation regime. And we anxiously await Mr. Obama’s responses to a range of pressing and deadly serious challenges abroad, including the collapse of the six-party talks on North Korea, the humanitarian and political crises in Africa and the daily growing mortal threat of all-out war and loose nukes in Pakistan. Mr. Obama’s diplomatic mettle will be especially tested in the Middle East. Israel’s implicit threat to disarm Iran through bombing and the Israeli government’s morally and legally questionable policies toward the Palestinians represent an existential threat to the U.S./Israel relationship and the peace of the region.

For now, however, Mr. Obama is off to a good start, especially for a president who also happens to be dealing with the greatest economic crisis in four generations.