A Call for Collegiality

A Call for Collegiality 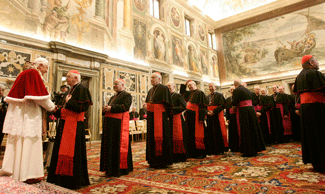 In the wake of Pope Benedict XVI’s controversial decision to lift the excommunication of four schismatic bishops of the Society of St. Pius X, The Tablet published a powerful article by the Italian journalist Marco Politi, who cited the incident as a prime example of disarray in the Curia, and argued that Benedict was acting like a “solitary monarch.” “The affair concerning the Lefebvrists,” Politi wrote, “has brought to light the heart of the crisis: the failure to implement collegiality.”  America asked three experts on church history and governance to respond to the article as a way of fostering discussion with readers.

In “The Church’s New Age of Dissent,” Marco Politi quotes a statement made by then Cardinal Ratzinger a few months before he was elected pope: “It is increasingly apparent that a worldwide Church, particularly in this present situation, cannot be governed by an absolute monarch….in time a means will be found to create realistically a profound collaboration between the bishops and the Pope, because only in this way will we be able to respond to the challenges of this world.” While we do not know what Pope Benedict XVI thinks about this issue now, it is clear that the collaboration he called for five years ago still does not exist.

The question of how best to practice collaboration has been a subject of debate since at least Vatican II. In the general discussion of episcopal collegiality at the Council, several bishops proposed the formation of a council or synod of bishops who, acting as representatives of the whole college, could collaborate with the pope in making decisions that would affect the universal church. Such a proposal was introduced into the draft of the Decree on the Pastoral Office of Bishops.

Paul VI knew that this proposal was to be voted on during the final period of the Council, but he chose not to wait for the Council to act. On the opening day of the final session he announced his decision to establish a “Synod of Bishops,” and on the next day he published the document by which he formally established it and laid down the norms by which it would be constituted. He specified that the purpose of the Synod was to assist the pope by giving him information and advice. It would have only a consultative role, although the pope could grant it a deliberative voice on a particular issue if he chose to do so. (Until now no pope has done this.).

We have now had 40 years of experience of the Synod of Bishops established by Paul VI. Has it turned out to be the means “realistically to create a profound collaboration between the bishops and the Pope”? Five years ago, the present pope evidently thought that it had not. And I do not know of anyone who thinks that the Synod of Bishops, as it has thus far been used, has achieved the purpose the bishops at Vatican II had in mind in their proposal.

Indeed, since Vatican II the popes have continued to take important decisions affecting the whole church without the collaboration of the episcopate. I have in mind Humanae vitae, Ordinatio sacerdotalis, Ad tuendam fidem and most recently, the lifting of the excommunication from the four schismatic bishops. In each of those cases the pope could have called an extraordinary synod and given the presidents of the episcopal conferences deliberative voice so they would have really shared responsibility for the decisions. Would the decisions have been better than what the popes decided without their help? God only knows. But they would surely have met with a better reception from the faithful than the decisions that the popes have made without them.

I worked for eight years in the Roman Curia (1971-1979), first for the Secretariat of State and then for the Congregation for Bishops. Almost all of my responsibilities were connected to the church in English-speaking countries. Though I can only speak of how I experienced the Curia then, my experience is evidence of how the consultation called for in Marco Politi’s article can serve an important role in church governance.

Consider, for example, the weekly staff meetings in the Congregation for Bishops. My colleagues and I were responsible for reviewing every terna  (list of three) of candidates for auxiliary or diocesan bishop sent by the papal representatives (the nuncios or apostolic delegates) in the countries we were assigned to monitor. We brought our recommendations to the staff meetings presided over by the cardinal prefect. For the most part we agreed with the proposals of the papal representative, and the list would go forward and make its way to the pope. At times, however, our own research and discussions—or shifts in policy on the part of other congregations or even the pope—led to the reworking of a particular terna by the papal representative.

The papal representatives had already engaged in their own consultations before finalizing a terna. After our staff meeting, however, we would sometimes make the recommendation to broaden a consultation or include others who had not yet been consulted. There was a pattern of consultation on various levels: local (diocesan, provincial, national) and curial (within the congregation itself, with other congregations and ultimately with the pope who then made the final decision). These levels of consultation provided an important series of checks and balances.

The appointment of bishops was not the only area where I saw checks and balances at work. Often higher authorities and the pope himself would write on a memo regarding some issue, “Consult the president of the bishops’ conference,” or some other person (cleric, religious, or lay) whose input would be helpful. We also had our own meetings with various parties, including co-workers in other offices. All of this provided immense amounts of information that served as an important check on the decision-making process.

For most of my time in the Curia, Paul VI was pope. In my experience, he was able to maintain independent lines of communication, which broadened his knowledge of different situations. In this he was an administrative genius. He was never dependent on a single source of information. This was extremely important because there are always those close to the center of power who want to prevail with their own agenda.

I do not want to give the impression that the 1970’s were a golden age in curial governance. There are certainly some who think that it definitely was not. I doubt that there has ever been a golden age and I do not expect one in the future. That is the lesson of history. My eight years in the Curia were informative and transformative. I learned a lot about the church and a lot about governance. To be open to new information, to foster consultation, and to engage in the give and take of checks and balances, humility is required—in abundance.

The traditions of the Catholic church are rich and complex, and generalizations about them are therefore dangerous. One generalization, however, can safely be made about the tradition of church governance: from the earliest centuries it operated in a cooperative, collegial and synodal mode.

We are all aware of the 21 ecumenical councils, but much less aware of the thousands upon thousands of local or provincial councils, often called synods, that persisted as a normative mode in church governance well into the modern era. Although these councils paid due deference to the bishop of Rome, they often conducted their business in practical independence of him. Our papal-centric perspective on church history has obscured this fact almost to the point of oblivion.

Nonetheless, even in our papal-centric historiography the collegial tradition has obtruded itself at three key moments when councils hoped somehow to temper the monarchical paradigm that the papacy ever more aggressively assumed in the Middle Ages. The first such moment was the Council of Constance, which in the early 15th century saved the papacy from itself by deposing two men who claimed the papacy and forced the resignation of the third. The council then cast a resounding vote of no-confidence by legislating that the popes convoke a general council every ten years, a provision soon ignored.

The second was the Council of Trent, which, contrary to popular lore, was a determinedly episcopal gathering in that its main accomplishment was to strengthen the dignity, authority and pastoral effectiveness of the bishops. It did so most notably by forcing them to reside in their diocese and insisting on only one diocese per bishop. The majority of bishops at the council wanted to reform the papacy by outlawing papal dispensations from these provisions. The crisis that ensued in the council over this issue brought it to grinding halt, and its eventual resolution stymied this attempt to “reform the head.” Nonetheless, Trent obliged bishops and archbishops to hold frequent diocesan and provincial synods. Once the council ended, however, the papacy, though it curtailed abuses, emerged stronger than before.

The final moment was the solemn ratification at Vatican Council II of the principle of the responsibility of the college of bishops for the governance of the universal church. This was the council’s attempt to retrieve and make operative on the highest level the traditional collegial mode, with and under Peter. The council also strengthened the authority of national episcopal conferences in their relationship to the Roman Curia, and otherwise tried to stimulate more collegial ways of proceeding in all aspects of the church’s operations.

With the pontificate of John Paul II, however, the central government of the church emerged more assertive than before. The Synod of Bishops, which Paul VI intended as an instrument for consultation if not collegiality, has not fulfilled even that modest expectation. The ideal of collegiality and even of consultation was no match for a deeply entrenched system.

Marco Politi is correct in seeing us at a moment of crisis when “the head” sometimes seems to be operating not only without taking collegiality into account, but even in defiance of it. Perhaps at this point a full-fledged implementation of collegiality is out of the question. But if in the light of the crisis the bishops and others continue to make known their grievances, perhaps we can hope at least for a recognition that consultation outside the Roman Curia is critically needed and that the advice given must be taken seriously.

Show Comments (
1
)
Comments are automatically closed two weeks after an article's initial publication. See our comments policy for more.
11 years 5 months ago
Controversial decision.What a way to start !Was the decision to excommunicate them equally as controversial to you?
Advertisement
Advertisement

This article also appeared in print, under the headline “A Call for Collegiality,” in the April 20, 2009, issue. 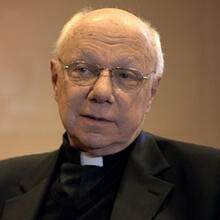 Msgr. John Strynkowski. a retired priest of the Diocese of Brooklyn, served in the Congregation for Bishops for six and a half years and at the USCCB for five years.