Skip to main content
Signs Of the Times
April 13, 2009 issue 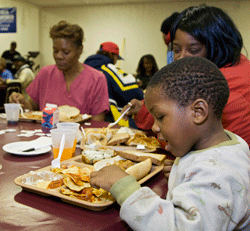 The U.S. Congress must remember "the least of these" in society as it makes choices on the federal budget for fiscal year 2010, according to the chairmen of two U.S. bishops committees in a joint letter to members of Congress. "Our faith and moral principles call us to measure economic decisions on whether they enhance or undermine the lives of those most in need," said Bishops Howard J. Hubbard of Albany, N.Y., and William F. Murphy of Rockville Centre, N.Y.

Among the domestic items the bishops emphasized in their letter were health care, affordable housing, climate change, the D.C. Opportunity Scholarships program for the District of Columbia, funding for federal child nutrition programs, and domestic agricultural supports for smaller farms. On international issues, the bishops stressed an increase in the international affairs budget, the Migration and Refugee Assistance account, and the Office of Refugee Resettlement budget.

The bishops also asked that Congress pass a budget that does not cut incentives for charitable giving. "The budget choices of Congress have clear moral and human dimensions; they reflect our values as a people," they said. "Our plea is simple: Put the poor and vulnerable first."

Health Care and W.I.C. On health care, the bishops said they "strongly urge" Congress to direct the money set aside in President Barack Obamas budget to "provide health care for all" and assure that health care "protects and enhances life and does not threaten or diminish it." The bishops said $4 billion a year—$20 billion over five years—would help make "critical improvements in access, outreach and nutrition" in federal programs such as the Women, Infants and Children nutrition program, known as WIC.

Housing. The bishops said Congress should restore funding to programs that provide affordable housing to families, including Section 8 vouchers, which allow individuals to pool federal subsidies with their own money to find quality housing. The bishops also asked that Congress fully capitalize the National Housing Trust Fund, which would increase the inventory of affordable housing in communities.

Education. They addressed the D.C. Opportunity Scholarships program, which is up for re-authorization by Congress. It is a trial program that has allowed low-income students in low-achieving public school neighborhoods to attend religious and independent schools in the nations capital. "It would be a terrible injustice to undermine this impressive and needed effort," they said.

Climate change. Bishops Hubbard and Murphy said climate change needed to be addressed both domestically and internationally. "The budget and other measures must effectively provide help to poor families in the United States and in poor countries to adapt and mitigate the costs and consequences of climate-change policy," they added.

Foreign affairs. The bishops’ requested a hike of $4.5 billion for the international affairs budget includig $3 billion for humanitarian assistance, development, food aid, debt relief, peacekeeping programs and HIV and AIDS treatment. They also estimated that 125,000 refugees could be resettled in the United States with a $2.05 billion Migration and Refugee Assistance account allocation to the State Department, with an additional $1.16 billion to the Department of Health and Human Services Office of Refugee Resettlement to provide domestic resettlement help to refugees from abroad.

"Too often the weak and vulnerable are not heard in the budget debate," Bishops Hubbard and Murphy said. “While they do not have powerful lobbyists, poor children and their families have compelling needs that have a priority claim on our consciences and our choices as the nation allocates limited federal resources," they said.

This article also appeared in print, under the headline “Bishops Press Congress to Remember Poor,” in the April 13, 2009, issue.