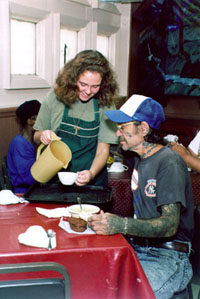 In his inaugural address, President Obama spoke of ours as “a moment that will define a generation.” He pointed specifically to the men and women in the armed forces as those who “embody the spirit of service; a willingness to find meaning in something greater than themselves.” “Precisely this spirit of generosity,” the president explained, “must inhabit us all.” His is a clear call to service, quite the opposite of so much we have witnessed during the past year, which might be called the year of Generation G, for greed.

Consumerism, greed and self-centeredness have surely contributed to the economic morass in which we find ourselves. Is it time now to move to a new spirit? Can we foster a culture or civilization of service, a civic generation? Generation X produced the pop culture of the 80’s and 90’s. Then came the millennials of Generation Y, born between 1980 and 2000. What might we call the new generation? Instead of C for cellphone, I for Internet, V for virtual or D for digital, how about Generation S—for service?

This spirit is already in the air. The Peace Corps (founded in 1961), which enlists college graduates and retirees, continues to labor in 76 countries, working in education, development and care for the environment. Habitat for Humanity, begun in 1976, has built more than a million homes for the poor. Campus Compact, begun in 1985 with four universities (Georgetown among them), now includes 1,200 colleges committed to involving college students in tutoring, home building and caring for the sick and elderly. Princeton University now encourages its incoming freshmen to spend a precollegiate year in social service in a foreign country.

A number of educational institutions at the high school and college level encourage or even require students to dedicate a designated number of hours to community service as a prerequisite for receiving a diploma. Faculty members are encouraged to accompany and guide students on overseas visits and volunteer projects. Fraternities and sororities may take up a specific charity or need in their community. In classrooms, the concept of service-learning is growing. Staff members and students integrate community service with reflection on the experience and instruction. Students, to give just one example, assist in collecting trash and cleaning rivers and lots, and then examine what makes up the trash and study better ways to reduce waste and pollution.

Such organizations as the Jesuit and Ignatian Volunteer Corps and the Lutheran, Franciscan and Mercy Volunteer Corps are only a few of the religious-based programs that are leading the way, inspiring and enabling persons of every age to give time and energy to projects at home and abroad.

The new administration, in addition to the creation of five new service corps in the fields of teaching, health care, clean energy, veterans’ assistance and emergency preparedness, also plans a major increase in AmeriCorps to 250,000 from its current level of 75,000. This will enable adults of all ages to meet critical needs in communities by engaging with nonprofit groups in teaching, mentoring, improving health service and building housing. Those who complete a year of service are eligible to receive an education award of $4,725 toward college tuition. Teach for America places approximately 4,000 graduating college seniors in teaching positions in needy schools. Large corporations and small businesses are also joining in. A growing sense of corporate social responsibility leads an increasing number of companies to encourage and even reward employees for community service beyond the workplace.

In the face of the economic downturn and hardships, with cutbacks in programs for the needy and for teachers, the need for Generation S becomes all the greater. Part of the economic stimulus, in addition to adequate salaries for teachers, might be to legislate tax benefits for them and for other employees who can demonstrate hours given to community service.

Some years ago, the Nobel Prize-winner Albert Schweitzer, already famous as a Scripture scholar and musician, became a medical doctor and served in Gabon, West Africa. He once addressed a group of students in the United States: “I do not know what your destiny will be, but one thing I know; the only ones among you who will really be happy are those who have sought and found how to serve.”

A revolution is taking place with a new set of values. This is our hope: that schools, corporations, businesses, churches and faith-based groups will take up the torch and encourage, empower and shape Generation S. In 1994 Congress declared Martin Luther King Jr. Day a National Day of Service. Such a day could lead to years of service. The label Generation S should not be reserved to persons grouped by age, but should designate multitudes of young and old Americans who are civic-minded and dedicated to serving the common good.

This article also appeared in print, under the headline “Generation S,” in the March 2, 2009, issue.