A Tragic Inheritance: A personal perspective on the abortion debate 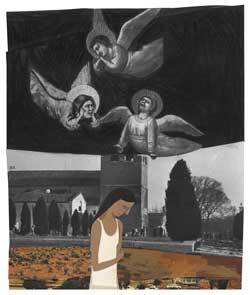 On the wall of my office in the parish of which I am pastor, there hangs a photograph taken around 1905. It shows five young girls between the ages of 4 and 15 sitting on the back of a horse: my grandmother and her sisters, all showing off their new shoes. Despite a penchant for thrift, their father had bought each of the girls a new pair of shoes, apparently enough of an occasion to be memorialized in a photograph.

The woman that I knew as my grandmother is the oldest in the picture, though my true grandmother is one of the younger girls. My father never knew his biological mother, because she died of a botched abortion when he was 18 months old and she was in her 20s. The abortion was forced upon her by my great-grandfather and performed by her two oldest sisters. My grandfather (her husband) was an alcoholic who was charming while drunk but kept a job and supported his family only with great difficulty. For my great-grandfather, an abortion was the solution to the problem of another mouth to feed.

In the early 1970s, my father was visiting a residence for senior citizens and ran into his pediatrician, then in his 90s. This doctor had also tended to my grandmother as she died. In that visit, my father learned most of what had happened all those years ago. Difficult conversations with his stepmother filled in the rest. The doctor knew on the night my grandmother was brought in what had happened, but it was never written on any chart or ever reported. In a poor country area full of sad situations, for an overworked doctor she was just one more.

The tragedy hung like a dark, unmentionable cloud over my father’s childhood, warping and wounding him and his older sister in deep ways. Being forced to marry one of the women responsible for the death of the wife he loved wrapped my grandfather and his family in a web of unspeakable guilt, darkness and depression. The sins of one generation truly were visited upon the next—and the next. Those events of nearly 90 years ago became a part of childhood for me and my siblings as well. My father was a good dad, but he bore the wounds of growing up in a household headed by a father and stepmother acting out their own guilt, resentments and rage against each other and their family. As those wounds shaped him in so many ways, they also shaped the manner in which he raised his own children.

As I look at that picture on my wall, I take away two things. The first is a conviction that many women have no real choice in the decision to abort. As a priest, I have been approached by young pregnant teens who need assistance in fleeing their home because one or both of their parents have insisted they have an abortion. I have also counseled women who were under intense pressure from boyfriends, family members and even husbands to abort. I have seen women abandoned with no economic re-sources and nowhere to turn who see abortion as their only option. The rhetoric of choice rings very hollow to me, because it masks the real anguish and desperation of the women I have known in this situation.

The second thing I take away is a realization that abortion has always been a reality in a society made up of sinful, myopic, selfish human beings. Abortion was a crime when and where my grandmother and step-grandmother were forced to abort, but criminality was no deterrent for the people involved.

I hate abortion. It is a personal and societal evil. Its devastating consequences never leave the lives of those who endure it. I do not want to be an apologist for those who promote it or who treat it as a trifling matter of no consequence, and I do not have much use for politicians (and others) who engage in endless arguments of the “how many angels can dance on the head of a pin?” type about when life begins. I also consider the argument that one is “personally opposed to abortion” but would never impose the belief on others to be a dodge, particularly when legislators (and others) are all quite willing to impose their beliefs in any number of other areas.

But I struggle, as I question the recriminalization of abortion, with what we as a society should do. The law is a blunt and deeply flawed instrument for dealing with the hardest realities of human life and is quite unsuited to the task. Yet inevitably the law is the first resource we turn to when faced with difficult societal questions. Many have adopted a strategy that the only morally acceptable answer to abortion is a legal one that would involve—at some future date—overturning Roe v. Wade. But that is just the beginning. If Roe were overturned, each of the 50 state legislatures would have to craft laws on abortion. This would involve another series of lengthy battles on the state level to recriminalize abortion and would put off to some far distant day any law that could be enforced. The defeat last November of a complete abortion ban in North Dakota—a state more likely than most to restrict abortion—underscores the limits of recriminalization as a strategy.

Ultimately, I think there are three questions that anyone who pursues only recriminalization as a primary strategy must ask. As of today, how many abortions have been prevented as a result of this strategy? At what point will pursuing this strategy significantly lower the abortion rate? And if abortion is recriminalized without significantly changing the realities that lead women to abort, what will recriminalization accomplish?

Studies suggest that the majority of abortions (somewhere between 50 percent and 70 percent) occur for economic reasons. If you add abortions that occur as a result of pressure from others (boyfriends, parents and husbands), there are certainly a significant number of abortions that could be avoided today, not at some future date.

We can accomplish such a reduction by working to change the current economic realities (unemployment, underemployment and lack of health care) that significantly contribute to abortion rates. We can work to change the attitudes and circumstances that rob women of power over their own lives and make them particularly vulnerable to the power others may have over them in making this most dreadful decision.

Would such efforts be a perfect or complete solution to the abortion question? Obviously not. But these we can work on today. The moral obligation to stand against abortion cannot rest solely on some possible future event. We have an obligation to reduce the abortion rate now. For myself, I owe at least that to those five girls—my grandmother and great-aunts—who posed for a picture on horseback more than a century ago.