Live Together or Die Alone: The spirituality of 'Lost' 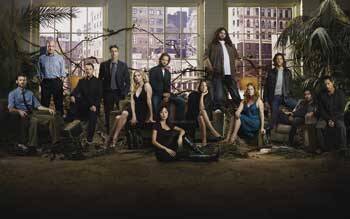 Everyone we left behind...they die, too, if I don’t come back,” says the lead character, Jack Shephard, in the teaser for the fifth season premiere of the ABC television drama “Lost.” Another character replies simply, “Well, thank God for second chances.” Driven by themes charged with existential significance and peopled by broken, downtrodden characters, “Lost” has consistently offered its viewers more than just popular entertainment.

Enlisted in a spiritual odyssey, viewers have followed the narrative of Jack (Matthew Fox), a hero-everyman and one of the 42 survivors of Oceanic Flight 815, a plane that crashed in the South Pacific in 2004. After four months stranded on a mysterious island (shown over four television seasons), salvation arrived in the form of a freighter sent by a wealthy businessman interested in harnessing the island’s unusual powers. When Jack and some of the “Losties” force their way onto the freighter, Jack demands that all the survivors be removed from the island. But given the vagaries of chance, only six of the survivors, including Jack, are able to leave.

Once off the island, Jack’s mental state begins to deteriorate; wracked with guilt over those he left behind, he becomes addicted to alcohol and painkillers. Obsessed with returning to the island, he boards many transpacific flights in the hope of crashing again (one of the island’s puzzling characteristics is that it is nearly impossible to locate). But Jack’s thirst for redemption predates his tenure on the island. Prior to the plane crash, he had been coping with the recent death of his father, with whom he had a strained relationship, and a failed marriage. He is, as another character describes him, “a man of science” and a brilliant “fixer,” which has served him well as a spinal surgeon. But Jack has not been able to fix his profound psychological wounds and shattered emotional bonds. He could do nothing for the alcohol problem that plagued his father (and that ultimately led to the schism between them), nor could he save his marriage to a former patient, a woman who would have remained paralyzed if not for Jack’s surgical skill. “You will always need something to fix,” she says, as she leaves their home. Since he has already fixed her, Jack has mentally “checked out” of their marriage; he is more interested in the medical challenges presented by his work than in the deeper challenge of maintaining their relationship.

In the aftermath of these losses, Jack seemed headed down a solitary path. Instead, the catastrophic crash thrust him into a ragtag community in need of his leadership. In an early episode Jack tells his fellow survivors: “We can’t do this. ‘Every man for himself’ is not going to work...we’re all here now. And God knows how long we’re going to be here. But if we can’t live together, we’re going to die alone.”

The “live together or die alone” credo has been a steady refrain throughout the show’s run, underscoring what has become a central theme: the value of living in community. So when Jack boards a helicopter on his way to safety while 40 other survivors remain stranded, he cannot escape the feeling that he has failed. Jack condemns himself to exile, anesthetizing his psychological pain and gradually coming to the realization that what he needs is a chance to set things right.

Redemption, like the need to “live together,” has long been a part of this hit show. In fact, the island has given nearly all of the survivors a second chance. Jin and Sun Kwon (Daniel Dae Kim and Yunjin Kim), freed from the constant threat of Sun’s crime-boss father, rebuild their marriage and commitment to each other; James “Sawyer” Ford (Josh Holloway), an expert con man, discovers the value of self-sacrifice; Kate Austen (Evangeline Lilly), a former fugitive, runs headlong into danger to save her friends; Sayid Jarrah (Naveen Andrews), an ex-interrogator/torturer for the Iraqi Republican Guard, confronts the specter of his past wrongs.

Perhaps the greatest and most powerful example of redemption at this point in the series, however, is Michael Dawson (Harold Perrineau). Desperate to recover his son, Walt, who was kidnapped by a rogue band of “Others,” who have lived on the island for many years, Michael accedes to their demands to kill two of his fellow crash survivors and lead four others into enemy territory. He is rewarded for his treachery when the Others spirit him and his son from the island. But back home in New York, Michael is haunted by the memory of his betrayal and tries several times, unsuccessfully, to commit suicide. Unable to live or die, he is given a chance to return to the island, where he ultimately sacrifices his life disarming a bomb, saving the lives of the same people he once endangered.

The significance of individual choice extends even to the show’s narrative style. “Lost” employs parallel storytelling (juxtaposing a character’s pre-crash flashback with a current island crisis), providing several points for meditation on the nature of good and evil, people’s obligations to one another, the power of love and the endless struggle between faith and doubt. Placing moral crises in the context of a struggle for survival lends a sense of urgency to the choices made. When characters stumble—in one instance, Sayid uses the interrogation tactics he had renounced to torture Sawyer, who he believes is hoarding life-saving medical supplies—they threaten not only their own interpersonal relationships but the strength of the only civilization they have. In a sinister world where all the characters have is one another, their decisions become much more important.

While “Lost” is too nuanced for simple allegorical mapping, the island is essentially our world writ large. While we are not plagued daily by murderous polar bears, an ominous “smoke monster” or creepy forest whispers, the island setting merely makes the challenge of living in community more apparent. The consistent message is that treating each other with dignity, respect and love is paramount; and it is no coincidence that every second chance awarded is oriented toward living together, not dying alone.

Fittingly, in the fifth season, where the main focus is the rescue of the survivors who were left behind, all of those who returned home must reunite and go back together (the island seems to have some very specific dictates about who can come and go). Jack, the initiator of this quest, seems destined for leadership. His father, the portentously named Christian Shephard, is a recurring presence in several characters’ flashbacks, which serve as an interconnecting thread between people who are otherwise strangers. Jack is using his second chance to fulfill a greater legacy, steering his friends toward deeper commitment to and love of one another, a value that is as critical for them—and us—as survival itself.

Show Comments (
5
)
Comments are automatically closed two weeks after an article's initial publication. See our comments policy for more.
13 years 7 months ago
Well said... thanks.
13 years 7 months ago
Great read!
13 years 7 months ago
All the multifacited allegories of the story seem to draw their magnetic attraction from the underlying mystery of Existence itself.The world of limitations such as time,place, cause and effect manifest Existence but they only provide us with awareness of where Existence "ends", not where it is. The transformation of consciousness which leads us to identify the "real" with the "Unlimited" leaves us feeling LOST.
13 years 6 months ago
A great piece. Michael's redemptive story was very powerful. However, the Others didn't want him to kill two fellow survivors but rather spring Ben from the Hatch. Ana Lucia was on guard when Michael came to free him and Libby was just at the wrong place at the wrong time.
13 years 1 month ago
Thanks for the review and podcast. I'd like to add the observation that in addition to the  fascinating web of current and past relationships, almost, not quite all, but *_almost_* all, of the characters have extremely significant "father issues".