A Virtual Church: Give us this day our daily blog....

A Virtual Church: Give us this day our daily blog.... 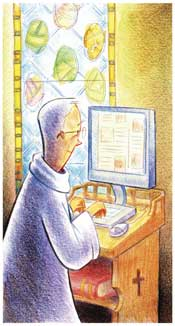 After my ordination as a deacon for the Diocese of Brooklyn in May 2007, with my head still swimming from the incense and my ears still ringing with the Litany of Saints, I clicked on my computer and, in an act of either madness or inspiration (I’m still not sure which), did something that would mysteriously and permanently change my life.

I started a blog.

For the less Web-savvy, a blog is a “Web log,” a kind of online journal for posting ideas, opinions, news, videos, songs—almost anything. I am hardly a pioneer. Blogs have been around for a decade or so, and one of the most engaging Catholic sites is maintained by Boston’s Cardinal Seán O’Malley. But I did not know of many deacons who were blogging. I picked a name that I hoped would sum up what it was all about: “The Deacon’s Bench: Where a Roman Catholic Deacon Ponders the World.”

The months that followed were a revelation. I saw firsthand both the promise and the peril of the Internet. And I found myself rubbing elbows with readers from around the world who, to quote a friend of mine, may have been Catholic but sometimes forgot they were Christian.

At first I had intended to use my little corner of the Internet to dump my Sunday homilies and post news items about deacons and vocations, but I soon decided to broaden my scope. Anything Catholic was fair game. I started trolling Catholic Web sites, diocesan newspapers, anything my Google search turned up.

I also started dropping by other Catholic blogs. Many were staunchly conservative and fiercely partisan regarding politics. Others devoted considerable time and energy to reporting the latest news about schismatic traditionalist Catholic groups or the Tridentine Mass. None of this appealed to me much. Instead I wanted to stake out territory that was home to most American Catholics, or at least those I encountered in my ministry: the observant and thoughtful churchgoing people who were curious about the faith, showed up every Sunday for Mass with their envelopes and sleepy children, and did not cling to extremes of either the right or the left. I was looking to capture the middle ground. But how could I get people to read this stuff?

I turned to an old friend of mine, Elizabeth Scalia (the blogger known as the Anchoress) for advice. She recommended, among other things, lots of links. In a show of bloggerly solidarity, she started making reference to my little site regularly on her own blog. Others took notice. The Catholic writer Amy Welborn mentioned the site on her blog and added “The Deacon’s Bench” as a permanent link. Traffic began to pick up.

I added a “site meter” to my page, which tracked how many people were reading it and where they were coming from. At first, it was a few hundred readers a week. A huge number of them, I was amused to discover, were do-it-yourselfers—carpenters or furniture makers who ended up at my blog after doing a Google search for information about how to build a deacon’s bench.

The Perils of Popularity

Over time, more established bloggers began linking to “The Deacon’s Bench,” most notably Rocco Palmo, whose “Whispers in the Loggia” blog has evidently become required reading in every chancery in America. “New Advent,” another site, began listing some of my writings in its daily list of notable blog posts.

Readers began to leave encouraging comments. I was pleasantly surprised when the site meter showed readers from Manila, London, South Africa and even Rome. Someone from Dreamworks Studios in Hollywood was reading it. I saw Web addresses for chanceries in Chicago, Los Angeles, Atlanta and Brooklyn. Even people from the U.S. Conference of Catholic Bishops in Washington were reading me. So were Catholics of every stripe, who were not shy about sharing their opinions.

At times, it seemed as if people were quietly measuring me and my blog to see if I was “Catholic enough.” Soon after the site launched, I found a YouTube clip from “The Simpsons” showing what Marge imagined “Catholic heaven” was like: brawling drunken Irishmen and piñata-whapping Hispanics. I thought it was a riot, and posted a link to it on Father’s Day. One reader commented: “Twenty centuries filled with examples of heroic Catholic fatherhood and we get the Simpsons??? D’oh!”

Another time, when I posted a link to one of my essays in America, a commenter sniffed, “I look forward to the day your work will appear in a Catholic publication.”

Nothing sparks debate (or fuels outrage) like politics. A news item I posted in summer 2008 unexpectedly landed like a live grenade. Barack Obama had invited an 86-year-old Sister of St. Joseph, Sister Catherine Pinkerton, to offer a prayer at the Democratic National Convention. I posted the story without comment under the headline from the original news story: “Nun to Offer Prayer at Democratic Convention.”

The reaction was swift. First, I was excoriated for calling her a “nun”—nuns live in a cloister, I was scolded, and this woman does not even wear a habit. Then there was the problem that she appeared to be forming an alliance with a political party that favors abortion rights. One reader said that if this woman lived in his diocese, she would be denied Communion. (I was not aware that praying at a convention without endorsing any candidate was a canonically punishable offense. Someone should notify Cardinal Roger Mahony, who offered the prayer at the Democratic National Convention in 2000.)

A notable absence from the convention did not fail to draw readers’ notice either: Denver’s Archbishop Charles Chaput. “How come the sanctimonious Democrats choose to offend all U.S. Catholics by snubbing him?” a reader wrote. “It’s utterly disgraceful. No Catholic, regardless of canonical state, should in any way, shape or form support B. H. Obama for President.”

Another reader, after visiting the Web site for the Sisters of St. Joseph, noted: “I wonder how many vocations her order had this year? Hopefully they’ll fade away soon.”

Those were some of the kinder comments. Confronting this sort of frat house sensibility, with all its belching and braying and foot stomping, I began to despair. Was this what 21st- century communication had come to?

Reaching Out Through Cyberspace

Last year I noticed an upturn in readership around the time of Pope Benedict’s visit to America. Men who were interested in the diaconate were reading the blog and writing in, eager for more information. A woman whose niece was undergoing a sex-change operation wrote me, wondering how she should deal with it. (I directed her to the U.S. bishops’ pastoral letter Always Our Children.) A 17-year-old boy from Portugal who was struggling with his faith wrote in to ask for prayers. A deacon from Australia invited me to submit an essay for the vocations fair during World Youth Day. People were finding their way to “The Bench.” I was pleased.

Then, one night in August, on the eve of the Feast of the Assumption, I decided to check my e-mail before going to bed. There was an item in my inbox titled, “I lost one of my students today.” I sat down and took a deep breath. It was from a Catholic teacher in Newark, N.J. One of his pupils, a 15-year-old boy, had been shot and killed that morning while sleeping in his own bedroom. News reports said a neighbor downstairs had been handling a rifle that had gone off accidentally.

The teacher was devastated. He told me that he wrote because he just needed to get it off his chest. “I am stricken with grief at a time when my heart would otherwise be elated—but I know my young student, my child, celebrates this feast in the arms of the Blessed Mother,” he wrote, and asked for prayers for himself, his students and the boy who had been killed.

I did not know what to say. I wrote back to him, offering a few words of consolation, and told him I would pray for him. But something, I felt, had changed.

The flickering words on a computer screen spoke of something greater, and deeper, and sadder than anything else I had encountered in my months of blogging. In the middle of all the bickering in the blogosphere, I had encountered a moment of unexpected grief and profound grace—beautiful, heartbreaking, soul-wrenching grace.

A World of Grace

If nothing else, the Internet makes us acutely aware of this: the world is bigger than we realize and smaller than we expect. We are bound together in ways we cannot even imagine. I have learned a lot since I began blogging, but the greatest lesson may be that we are catholic, which means we are universal, and that we are everything and everyone, for better or for worse.

It just might be that of all the forms of communication, the Internet is the most catholic; the Web is truly universal. Blogs, chat rooms and online forums have be-come our confessionals, our pulpits, our sanctuaries. My friend the An-choress has even experimented with posting morning and evening prayer on her site, complete with chants, creating something like a monastic cyber-choir for countless anonymous souls seeking spiritual refreshment. (Behold: you can now sanctify the day with a keyboard and mouse.)

Of course, no computer screen or comment box can replace the sense of community found in a gathering of like-minded souls, huddled in a hushed and darkened temple, surrounded by lit candles and smoldering incense, raising their hearts and voices to God. To be church, you need more than a screen name and an e-mail address. Yet I cannot help but think this technology offers wondrous possibilities. Here is a new way to evangelize, to learn, to teach, to build community. Who knows? Maybe the era of fish fries and soup suppers and pancake breakfasts will eventually give way to online chats every Friday during Lent.

In the meantime, I go on blogging. At last count, “The Deacon’s Bench” was averaging about 50,000 visitors a month. Whenever I start to feel cocky about that, I just check my site meter for what they were searching for, and I am quickly brought back to earth.

A lot of them are still looking for advice about furniture.

This article also appeared in print, under the headline “A Virtual Church,” in the February 2, 2009, issue.

Greg Kandra is a deacon for the Diocese of Brooklyn, where he is news director for the diocesan cable channel, NET. He also writes the blog “The Deacon’s Bench” (www.de