No Scrooge He: The Christianity of Charles Dickens

No Scrooge He: The Christianity of Charles Dickens 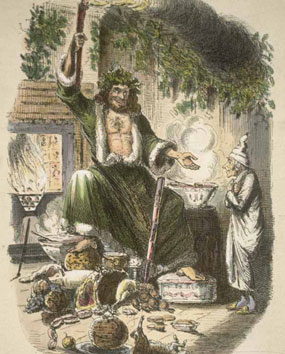 Although he wanted to be popular and become wealthy through his writing, Charles Dickens, the author of A Christmas Carol, always had really only one goal as a novelist: He wanted his novels to be “parables,” stories that would emphasize the teachings of Christ.

The one aspect of his life that best reveals Dickens’s deep Christian faith is his fiction. He believed firmly that he had a responsibility as an artist to make clear to his readers how to lead a moral life; and he wanted to show, through his novels, that Christianity was important to their own beliefs and actions. A note he wrote to his friend the Rev. D. Macrae expressed exactly how he felt:

With a deep sense of my great responsibility always upon me when I exercise my art, one of my most constant and most earnest endeavours has been to exhibit in all my good people some faint reflections of the teachings of our great Master, and unostentatiously to lead the reader up to those teachings as the great source of moral goodness. All my strongest illustrations are derived from the New Testament; all my social abuses are shown as departures from its spirit; all my good people are humble, charitable, faithful, and forgiving. Over and over again, I claim them in express words as disciples of the Founder of our religion.

A Tale of Conversion

Arguably the most beloved novelist of all time, Dickens is best known for A Christmas Carol. In his tale of Scrooge’s “conversion” from selfishness to selflessness, Dickens succeeded in calling attention to what are regarded as common Christian themes, centering on redemption and charity. What makes Scrooge such a wonderful character, in spite of his reputation as greedy and uncaring, is that he is really a Dickensian Everyman; he is the representation of all human beings who are seeking to find the secret of what makes life meaningful. Scrooge asks the same questions all human beings ask: How does one find salvation?

Dickens’s own view of Scrooge’s “redemption” becomes evident at the end of the novel. Unlike the unredeemed Scrooge of the beginning of the story, described as a “squeezing, wrenching, grasping, scraping, clutching, covetous old sinner,” the redeemed Scrooge is a changed person:

He went to church and walked about the streets, and watched the people hurrying to and fro, and patted children on the head, and questioned beggars, and looked into the kitchens of houses, and up to the windows; and found that everything could yield him pleasure. He had never dreamed that any walk—that anything—could give him so much happiness.

The redeemed Scrooge is now fully aware of the true meaning of the Christmas season: remembering the birth of Christ and unselfishly helping others. Our final view of Scrooge reinforces the sentiment that all things are possible at this magical time of year. “It was always said of him,” Dickens tells us, “that he knew how to keep Christmas well.... May that truly be said of us, and all of us! And so, as Tiny Tim observed, God bless us, every one!” With the conversion of Scrooge, Dickens illustrates that his readers, too, can also be converted from a harsh, complacent, selfish worldview to one in which love, hope and charity are possible.

The Centrality of Faith

Readers may wonder about Dickens’s own religious beliefs and his own religious faith. He was born into an Anglican home—his parents were actually nominal Anglicans, who did not attend services regularly. He was baptized in the Anglican Church and was nominally a member all his life except for a brief period in the l840s when he joined and attended Unitarian chapels. We know for certain from his letters, speeches and novels that he hated dogma and any kind of doctrinal beliefs.

In his novels, correspondence and speeches Dickens avoids making direct statements about his own personal religious beliefs; for him, Christianity meant something positive rather than negative, something that emphasized morality and love. In his writings and speeches he portrays the life of Jesus as the best example one could have for leading a truly religious life. He was so adamant in this belief that in his will he left instructions to his children “to guide themselves by the teachings of the New Testament in its broad spirit, and to put no faith in any man’s narrow construction of its letter here or there.”

The first, The Dickens Family Gospel, focuses on the ways that Dickens, as a “Christian parent and teacher,” attempted to give his own children a sound religious education, one based chiefly on the New Testament. Dickens himself wrote to one of his own children: “I most strongly and affectionately impress upon you the priceless value of the New Testament, and the study of that Book as the one unfailing guide in life.” The famous novelist also wrote many prayers for his children. Hanna cites one: “Hear what our Lord Jesus Christ taught to His disciples and to us, and what we should remember every day of our lives, to love the Lord our God with all our heart, and with all our mind, and with all our soul, and with all our strength; to love our neighbors as ourselves, to do unto other people as we would have them do unto us, and to be charitable and gentle to all. There is no other commandment, our Lord Jesus Christ said, greater than these.”

In his second book, The Dickens Christian Reader, Hanna again shows the novelist’s firm Christian convictions based on both the Old and New Testaments. Most readers will know the passage from Deuterono-my (15:7) on which A Christmas Carol rests, but there are many other passages in the Bible that are reflected in Dickens’s novels. In David Copperfield, for instance, the forgiveness of Steerforth, Emily’s seducer, by Mr. Peggotty, Emily’s uncle, illustrates clearly the words of Mt 7:1 (“Judge not, that you be not judged.”) and Mt 18:21-22 (“How often must I forgive him? Seven times?” “No,” Jesus replied, “not seven times, I say, but seventy times seven times.”) More familiar, perhaps, is the allusion to Jn 15:13 (“There is no greater love than this: to lay down one’s life for one’s friends”) in A Tale of Two Cities, in which Sydney Carton goes to the guillotine in place of Charles Darnay.

These Christian themes are scattered throughout all of Dickens’s novels, but they are perhaps most prominent in The Life of Our Lord, a book that Dickens called an “easy version” of the Gospels. This work, written in 1846 for reading aloud to his children, was not published until 1934. (Dickens’s own title was The Children’s New Testament.) More than any other of his writings, it reflects the spirit of what he called “real Christianity,” by which he meant the Christian virtues of trust, kindness and forgiveness. It illustrates clearly his view of Jesus Christ and his views of Christian commitment.

The Life of Our Lord illustrates precisely what Dickens wanted his children to believe in the life and teachings of Jesus Christ. First, Dickens depicts Jesus as kind and loving. He tells his children that he is anxious that they know something about the history of Jesus Christ because, he tells them, no one ever lived “who was so good, so kind, so gentle, and so sorry for all people who did wrong, or were in anyway ill or miserable, as he was.” He describes Jesus as a child who will grow up to be “so good that God will love him as his own son; and he will teach men to love one another, and not to quarrel with one another.”

Another section of the Life treats the miracles of Christ. Jesus performed miracles here on earth, and these miracles were done because, Dickens tells his children, “God had given Jesus Christ the power to do such wonders; and he did them that people might know he was not a common man, and might believe what he taught them, and also believe that God had sent him.” Throughout the book Dickens emphasizes those qualities we associate with a loving God: kindness, charity, forgiveness and mercy. At the end of the book he summarizes these Christian virtues:

Remember!—it is christianity [sic] TO DO GOOD always—even to

Throughout this work, then, Dickens reinforces his values and ideas: the belief in a loving God, not a God of stern judgment; the rejection of theological controversy; the acceptance of an inclusive rather than an exclusive religion; and the emphasis on doing good works.

Our Mutual Friend, Charles Dickens’s last completed novel, treats his favorite themes: class, education and mercenary attitudes. In this novel Dickens condemns mercenary marriages and class prejudice and emphasizes the value of education. He depicts the positive characteristics of his own Christian beliefs in Bleak House, demonstrating through the character of Esther Summerson the way that a selfless life, one based on the teachings of Jesus Christ, can help others. At the end of the novel Esther, now married to a doctor, muses on her life:

We are not rich in the bank, but we have always prospered, and we have quite enough.... I never lie down at night, but I know that in the course of the day he has alleviated pain, and soothed some fellow-creature in a time of need. I know that from the beds of those

who were past recovery, thanks have often, often gone up, in the last hour, for his patient ministration. Is this not to be rich?

For the Christian Dickens, it is clear that Esther provides, as one critic has put it, “a moral lens on characters and events and shows us how to live with Christian responsibility in an imperfect world.”

In Great Expectations, Dickens illustrates the words of Mt 6:1-4 by having Pip anonymously help his friend Herbert Pockets. “I begged Wemmick,” Pip says, “to understand that my help must always be rendered without Herbert’s knowledge or suspicion.” Clearly this echoes Matthew: “Be on guard against performing religious acts for people to see.... Keep your deeds of mercy secret, and your Father who sees in secret will repay you.”

Often overlooked by readers is Dickens’s firm resolve to show the way to what can be called a Christian life, one that emphasizes love, humility and values. His novels are not simply potboilers, as many critics and teachers judge. Through the actions and thoughts of his characters, the writer sought to bring the relevance of Christianity into quotidian life. It is clear that Dickens wrote his novels with the goal not merely to entertain and to enrich himself, although he accomplished both goals. His chief aim, as I noted at the beginning, was to promote individual “salvation” and bring about social reform. His “religious” views, while perhaps not strictly sectarian, were meant not so much to undermine orthodox belief as to demonstrate that a “practical” and humanitarian Christianity that reflected the life of Christ could solve personal and social problems.

This article also appeared in print, under the headline “No Scrooge He,” in the December 22, 2008, issue.

Michael Timko, who taught Victorian literature at the City University of New York until his retirement, is co-editor of Dickens Studies Annual.