Gateways to Prayer: The enduring spiritual power of icons

Gateways to Prayer: The enduring spiritual power of icons 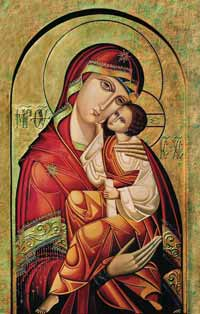 Icons have been objects of faith, controversy and fascination for centuries. The popularity of icons, which are a rich resource for prayer, continues to this day as such artists as the Rev. William Hart McNichols and Robert Lentz, O.F.M., practice the art of modern iconography.

Praying with icons is an intuitive art gained with practice and experience. Henri Nouwen provides an enlightening introduction to the practice in his book Praying With Icons. Nouwen recounts the weeks he spent “gazing” at four Russian images and reflecting on select passages from Scripture. Christians interested in making use of icons in prayer can imitate Nouwen’s method, but they need not do so. There is a freedom of engagement in the contemplation of art that varies from person to person and with time and place. Still, as one embarks on this journey of prayer, it is useful to keep in mind a few guiding principles and to reflect on the history of this holy art form.

The Christian mysteries reflected in iconography are primarily the Incarnation and the Redemption. The primary power of icons lies in their physicality: they make the presence of the holy tangible. They rouse the imagination and generate emotions in the viewer.

Especially noteworthy among all icons are those of the Blessed Mother. Holding the infant Jesus in her arms, she radiates the light of Christ. Gazing upon her, the viewer is moved by her gestures, especially the movement of her hands and eyes. Like a mirror vessel, she reflects a profound mystery: that we too hold God within us and can touch the divine with our hands. Though the child may often be asleep in our earthen vessels, he is nevertheless a sign of the peace of the Father dwelling within us.

Two types of icons are most reflective of Mary’s mystery: in the first, she is depicted holding the grown-up child Jesus in her arms; in the second, she gives praise with open arms as the child dwells in that perfect circle of her womb. In both representations Mary symbolizes the altar and the throne upon which and through which Christ is being fully transfigured to our world.

One is impressed by how often in the painting (or the writing, as it is called) of these icons, Mary appears larger than Jesus. Clearly the icon painter intends to show her great value before God. In such icons the emphasis is not so much on Mary’s humility, but rather on her enormity as the mother of God. The icons of the annunciation to Mary by the Angel Gabriel vary in their depiction of the scene, though usually they emphasize the spiritual nature of the visit, with a special emphasis on Mary’s discerning posture. Likewise the icons that represent the visitation of Mary to Elizabeth depict a holy kiss and a welcoming hug between the two joyful mothers. They seek to depict what Luke suggests in his Gospel account of these events, though more is left to the imagination.

The icons of the nativity of the Lord reflect moments of excitement, wonder and peace at the birth of the Lord Jesus in Bethlehem, expressed in narrative form in the Gospels of Matthew and Luke. (Since Luke emphasizes Mary’s role in the incarnation, he is often described as the first to have painted the icon of Mary—with words, of course, not paint.)

Painting the Life of Jesus

Many icons dramatize the life of Jesus. The traditional icons of the Baptism of Jesus in the River Jordan often show him sanctifying the river as he is immersed in it. The symbols of the Father and the Spirit are above him, while below he is flanked by the heavenly world of the angels on one side and by his human friends and followers on the other.

The Gospel accounts of the parables of Jesus are also filled with colorful and dynamic images. Gazing at icons of these parables can enliven the imagination, helping to flesh out what may be hidden behind the words of Scripture. The icons depicting the prodigal son and his loving father, for example, express in a gesture of embrace the longing of the two for each other, and of God’s very longing to embrace us as well—perhaps even at that same moment of contemplation.

The miracles of Jesus, either of nature or healing, are also presented as dynamic events. Combined with Scripture passages, they can inspire us to contemplate the hidden powers of God. Consider the icon of the tempest on the lake: while Jesus sleeps in the boat, his disciples are pictured as fearful and anxious. This moment may call to mind various times of fear and anxiety in our lives, as we try to awaken the powers of Jesus dormant inside us. Another moving miracle often depicted in icons is the miracle at Cana, where the water turns to wine as it is poured into large jars. Here we witness Jesus’ special relationship with his mother and the generosity he offers to the wedding couple.

Jesus’ healing miracles also served to inspire many icon artists. The posture of women at miracles—whether it is the hemorrhaging woman holding fast to Jesus’ garment, or Martha and Mary at the raising of Lazarus—stresses the human agony of separation as well as the human desire for healing and God’s compassionate response to our needs.

Icons can be used in individual prayer or during retreats. They are especially suited to Ignatian forms of prayer, which by their nature seek to use the imagination to open doorways to mystical and spiritual realities. With time and careful attention, icons can reveal several layers of meaning. To make the best use of them, it is important to have a variety of images to choose from. As we have seen, it is natural to pair certain icons with specific scriptural passages. Other icons work well in conjunction with particular prayers. Images of Jesus and Mary, for example, can enhance the dialogue prayers in the Spiritual Exercises known as colloquies.

Here are a few other things to consider as you begin your prayer:

1. The choice of an icon should be based in part on the graces being asked for. If one seeks relief from anxiety, for example, the story of the calming of the storm (mentioned above) may be a good choice.

2. During prayer, one is likely to encounter moments of self-understanding, passion, zeal or conflict. Pay attention to these emotions, and what you were praying for when you experienced them. It is not uncommon for the image being gazed upon to change in affect as one continues to pray before it and through it.

3. After you finish your prayer, a reflective review can help to record the movements of the heart and of the Holy Spirit. Private reflection can be followed later by a conversation with a spiritual guide for guidance and discernment.

Praying with icons can help enrich our own spiritual lives, but the images can also help us to pray for family and friends, and even for an end to the maladies that plague our world. For example:

• Icons depicting God’s love can be projected on loved ones, perhaps through the aid of a photograph. It is a way of putting on the love of Christ, to wrap our loved ones in the care of the heavenly mother and father. One might use an icon on the theme of Mary as Mother of Tenderness, which shows Mary and the child Jesus locked in a warm embrace.

• Icons expressing God’s love for humanity can be used to pray for an end to war or relief from hunger and poverty. Icons of Christ’s passion can be relevant here, as well as the genre known as Fountain of Healing, which pictures Mary and Jesus sitting atop a fountain of live-giving water.

• Icons of God’s love can also be paired with images representing God’s natural creation. By doing so one can achieve a sense of solidarity with God’s world.

By using icons in prayer, we can transform our view of ourselves and of the natural world. Icons awaken us to a renewed reality—that we are living in a spirit-filled world, touched by the hidden redemptive powers of God’s love through Christ. Our attitude toward the earth itself can become a matter of relating to a world redeemed. Likewise, we can no longer objectify our human brothers and sisters, for all people being redeemed by God’s graces now reflect and radiate the loving traces of the beloved son’s light.

In his treatise On Holy Images, St. John Damascene offers the important insight that God chose to become matter so that we can see, touch and be present with him through our material world. “When the Invisible One becomes visible to flesh,” he wrote, “you may then draw a likeness of his form.” All Christians are indebted to the icon artists, both past and present, who have heeded this call.

View a slideshow of popular icon subjects and themes.

This article also appeared in print, under the headline “Gateways to Prayer,” in the December 8, 2008, issue.

Stephen Bonian, S.J., a Jesuit priest of the Eastern tradition, is based at the Jesuit Center in Amman, Jordan and ministers to the Eastern churches in the Near East.