Maestro of Joy: Olivier Messiaen at 100 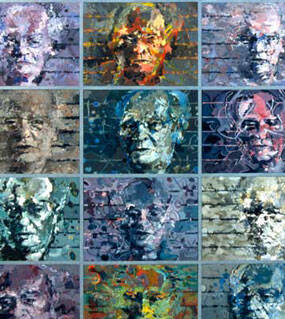 Who sings well, prays twice,” said St. Augustine (and we must never forget that caveat: who sings well). Music and prayer have been closely intertwined in the world’s great religions, and no one in the 20th century so inextricably linked the two as did Olivier Messiaen, the composer and master organist whose birth centenary we celebrate this year.

A few years ago, when I was interviewed on a program for the Australian Broadcasting Company, the host insisted that I choose a piece of music to be used as background, saying that we would discuss, among other things, why I chose it. I chose Messiaen’s “Quatuor pour la Fin du Temps” (“Quartet for the End of Time”), which was originally composed in, and premiered at, Stalag VIII A, a German prisoner of war camp where Messiaen was interned in the early years of World War II.

A piece for piano, violin, cello and clarinet (the only instruments available at the camp), the title refers to the Apocalypse, but it also slyly evokes Messiaen’s rhythmic shifts of musical tempo; these combine both tonal and atonal scales, which, following medieval Western chant forms, dislocated rhythm from meter. In many of his best pieces, Messiaen created music that seemed, at times, outside time. Esa-Pekka Salonen, the principal conductor of the Los Angeles Philharmonic, said in a lecture on Messiaen that unlike almost all other Western music—which is mainly dominated by a kind of forward movement, the recapitulation of earlier motifs and crescendo—Messiaen alone, and characteristically, was capable of achieving a kind of timeless and contemplative sheer stopping of time, inhabiting, for a moment, eternity.

As Messiaen once put it: “My music is not ‘nice,’ it is certain. I am convinced that joy exists, convinced that the invisible exists more than the visible, joy is beyond sorrow, beauty is beyond horror.” Michael Linton, a professor of music, once said of the quartet that it is “a piece of musical radiance, joy and transcendence” written in the midst of squalor and misery. Throughout his long career as a composer, Messiaen preferred joy to any preoccupation with suffering. This is evident both in his stunning organ piece “Transport de Joie” and his truly astounding and monumental “Et Exspecto Resurrectionem Mortuorum,” which was commissioned by the French government to commemorate the war dead of the World Wars.

A brief recap of Messiaen’s major works shows just how this genuinely mystical, deeply devout Catholic brought music to prayer and prayer to music. Consider some of the following major Messiaen works: “The Ascension,” “Ecstasies of a Soul Before the Glory of Christ, Which Is Its Own Glory,” “The Nativity of the Lord,” “Visions of the Amen,” “Twenty Gazes at the Infant Jesus,” “Three Small Liturgies of the Divine Presence,” “The Transfiguration of Our Lord Jesus Christ,” “The Colors of the Celestial City,” “Meditations on the Mystery of the Holy Trinity” and “Et Exspecto Resurrectionem Mortuorum.”

Michael Linton has said of Messiaen’s music that it was able “to shed light on the theological truths of the Catholic faith.” The composer himself once exclaimed: “I was born believing. I would not have been able to compose anything if I had not had that grace.” “Vingt Regards sur L’Enfant Jésus” (“Twenty Gazes at the Infant Jesus”), a tour de force for a pianist, captures well his multiple gazes on God in the light of the Catholic faith. Written in Paris between March and September 1944, “Vingt Regards” evokes an extraordinary time when the Allies invaded France (D-Day took place that June). Messiaen’s score is a profound contemplation on existence and a major outpouring of gratitude. It ends with a movement that encapsulates a 15-minute paean to love. It meditates not only on the love of God and of existence, but on Messiaen’s own newfound love for the great pianist for whom he wrote the score, Yvonne Loriod, whom he married after his first wife died.

Few musical events so touched me as the American premiere of Messiaen’s tableau opera, “Saint Francis,” in San Francisco in 2002. One critic refers to this music as “arguably the most complex, difficult score in all of opera.” In one scene an angel plays heavenly music to the saint, who gasps that one more note of this celestial song would force him to sever soul from body. Citing Aquinas, the angel tells Francis: “God dazzles us by an excess of truth. Music carries us to God in default of truth.” Messiaen himself once said that music serves for us as a conduit to the ineffable.

The Sound of Eternity

What would a Messiaen piece be like without pealing bells and birdsong? One of his most dramatic uses of birdsong takes place in “Et Exspecto Resurrectionem Mortuorum.” Though André Malraux, the French Minister of Culture who commissioned the piece, requested that Messiaen compose a sort of requiem commemorating the outbreak of the two world wars and France’s dead, the composer turned it instead into a profound meditation on the resurrection of Jesus. Messiaen recounted that he reread and meditated on Thomas Aquinas’s writings on the resurrection before composing the piece. He uses two bird songs, including that of the Uirapuru, an Amazonian bird traditionally thought to be heard at the moment of death, to symbolize Christ waking the dead from sleep, signaling their impending resurrection. The virtuosic sublime song of the Calandra lark symbolizes, in turn, the gift of a new celestial agility for the risen ones. Appropriately enough, an image of a bird has been etched on Messiaen’s tombstone.

Perhaps surprisingly for such a devout Catholic, Messiaen rarely composed songs commemorating the suffering and passion of Christ, but instead emphasized the rapture of divine vision and joy. His was decidedly a theology of glory, transcendence and eternity. Time, suffering and the corporeal—all had their proper role, to be sure, but never set the primary tone of his musical compositions.

On Messiaen’s centenary (Dec. 10), concert halls and music festivals will amply celebrate his religious and musical genius. I hope churches also lift up his gift to the 20th century: for almost 60 years, Messiaen served as the principal organist at the church of La Trinité in Paris, and his contribution to the organ repertoire is probably the greatest since that of Johann Sebastian Bach. If Bach’s organ represents a cathedral of sound, Messiaen’s is like the stained glass in a cathedral. He once said of his organ playing: “The stained glass windows magnify the light, one of God’s first creations, but the organ brings to the church something similar to light that yet surpasses it: the music of the invisible. It is the wondrous overture of the beyond.” Some argue that Messiaen’s organ music is too unfamiliar, modern or sometimes jarring for ordinary congregants; but too few have really had the opportunity in churches to listen to its exquisite improvisations.

He was catholic with a small “c” too. His 10-part “Turangalila Symphony” was influenced by Hindu melodic songs. After a visit to Japan, Messiaen wrote a tribute to Japanese music in his musical haikus. He also drew on the Indonesian gamelan. If Jesus suggested that his followers consider the birds of the air, Messiaen took this advice to heart and captured the distinct birdsong music of at least 250 different bird species in his various musical works. (Not surprisingly, one of the rapturous parts of the opera “Saint Francis” is the section where Francis communes with the birds).

The sociologist Robert Wuthnow argues in Creative Spirituality: The Way of the Artist that music, for many of our contemporaries, is indeed a privileged conduit toward the ineffable God. Fittingly, this fall several symposia are being held on the spiritual origins of Messiaen’s compositions. (One held at Southern Methodist University in September was titled “The Musician as Theologian.”) Duquesne School of Music has celebrated an entire year of Messiaen concerts. In our churches, too, Messiaen deserves a fitting tribute (perhaps through his organ music) for the way he helped bridge so many gaps.

As one scholar has said, Messiaen pursued four dramatic tasks in his life: teaching birdsong to urban dwellers, linking color to music (Messiaen had the gift of synesthesia), attuning his music to the rhythms of nature (consider his remarkable musical tribute to Bryce Canyon, “Des Canyons Aux Etoiles...,” which led Utah to name a nearby mountain after him, Mount Messiaen) and communicating the mysteries of Christ to nonbelievers. At an appearance in 1986 with his wife, Yvonne Loriod, at the New England Conservatory of Music, Messiaen was asked by a student, “Does a listener have to have had a spiritual experience to appreciate your music?” “Not at all,” he replied, “but it would be the highest compliment to me as a composer if you had a spiritual experience because of hearing my music.”

Show Comments (
1
)
Comments are automatically closed two weeks after an article's initial publication. See our comments policy for more.
Sues Krebs
12 years 9 months ago
Music is the soul in sound. If the person is in pain the piece will show pain. So in a sense you could call music the words and notes that explain our hearts.