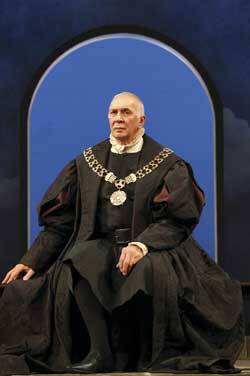 Sometimes a play shows up at just the right time. In the last year or so, the presence of religion on the fringes of the presidential campaign—Senators Barack Obama and John McCain’s ties to outspoken ministers as well as Governor Sarah Palin’s associations with millennialism—has served mainly to distract the electorate from the central issues facing our country. Religion is at the heart of the political struggle, however, in the latest revival of Robert Bolt’s acclaimed drama, A Man for All Seasons, currently playing in New York. The play recounts how, in a turbulent convergence of religious and political power plays involving the rulers of England and Spain as well as the pope, Thomas More, the lord chancellor of England, went to his death rather than recognize Henry VIII as the head of his country’s newly established church.

The play’s original 1961 American production enjoyed enormous popularity and critical acclaim, running for two years on Broadway and earning six Tony Awards, including Best Play of the season and Best Actor for the little-known British visitor Paul Scofield. The 1966 film version was equally popular and showered with awards, including Best Picture and Best Actor for Scofield.

Almost 50 years later, the play has reappeared on the American cultural landscape, offering the acclaimed Frank Langella in the lead role. Langella’s ability to infuse each role with personal magnetism has made him a major theatrical star with numerous awards to his credit for characters as diverse as a talking lizard in Edward Albee’s absurdist parable, “Seascape” (1975), a sexually-charged vampire in “Dracula” (1978), a 19th-century Russian fop in Turgenev’s “Fortune’s Fool” (2002), and—arguably his best performance ever—his subtle and complex Tony Award-winning performance as Richard Nixon in last season’s production of “Frost/Nixon” (which, fortunately, is preserved for posterity in a film version soon to be released). Now Langella takes on this monumental role, which requires that he remain on stage for almost the entire two and a half hours of a serious rhetorical workout.

In a positively explosive performance, Langella reinterprets the character of More as a man of passion as well as intellectual conviction. Scofield, in both his stage and screen performances, portrayed the noble humanist scholar, lawyer and statesman as an admirable stoic who eschewed any expressions of rage, fear or grief. Langella presents a more complex mix of intellectual acumen and deep feeling. His rough treatment of his friend the Duke of Norfolk, whom More must alienate in order to keep him safely distant from himself, involves pummeling, grappling and screaming. His farewell to his family in their final visit to him in the Tower, as he awaits his trial and almost certain death, concludes with More and his wife and daughter lying on the floor, clinging to one another in a sobbing heap. His eloquent and carefully reasoned explanations of his motives and legal strategies also differ from Scofield’s delivery. While Scofield delivered the speeches as if destined for the ages, Langella utters them in a conversational tone, meant for the ears of his daughter, his son-in-law or his wife and only incidentally for public consumption. At the center of almost every scene in the play, Langella’s More dominates the room not only with his wit and his moral stature but also with his profound feeling.

The play itself seems to have a meaning for all seasons. Its first Broadway production in early 1960s America bore a double resonance. Its presentation of a man who died defending the prerogatives of the Roman pontiff was of special significance to an audience who had only recently elected the first Roman Catholic to the White House.

Bolt’s stronger emphasis, however, was not so much on More’s religious loyalty, but on his “adamantine sense of his own self” as a rebuke to the organization men produced in the Eisenhower era. As More says to his friend the Duke of Norfolk when discussing the notion of the pope as the vicar of Christ on earth, “What matters to me is...not that I believe it, but that I believe it...I trust I make myself obscure?” Later, when his daughter Meg, pleading with him to take the Oath of Supremacy that declares Henry the head of the Church of England, suggests, “Say the words of the oath and in your heart think otherwise.” More responds, “When a man takes an oath, Meg, he’s holding his own self in his own hands. Like water. And if he opens his fingers then—he needn’t hope to find himself again.”

In our current political environment, the portrayal of Thomas More centers on his reputation as one of the most prominent legal minds of his age. His willingness to entrust his fate to the protection of British law stands in bright contrast to the sort of political leaders who are all too ready to ignore or adjust the law to serve their purposes, whether it be to destroy a dissenter in the days of Henry VIII or to protect us from terrorists in our own times.

When his future son-in-law urges More to arrest the scheming Richard Rich because he is a “bad man” who is violating God’s law, More responds by comparing the law to the trees in a forest. “I’m not God,” he says. “The currents and eddies of right and wrong, which you find such plain sailing, I can’t navigate. I’m no voyager. But in the thickets of the law, oh, there I’m a forester.... The country’s planted thick with laws from coast to coast—man’s laws, not God’s—and if you cut them down...d’you really think you could stand upright in the winds that would blow then?” In the end, of course, the law will not save Thomas More from Machiavellian men who are willing to lie under oath, as Richard Rich will do in order to become, ironically, a defender of the law as Attorney General for Wales.

This new focus on More’s confidence in the law places much more emphasis on his scenes with the passionately Christian William Roper, played here by an energetic young newcomer to Broadway, Michael Esper. With a pouty lower lip and dark eyebrows, Esper is the sort of zealous born-again Christian who, in More’s words, would gladly “cut a great road through the law to get after the Devil.” The production’s set echoes More’s forest-metaphor in the use of solid wood desks, tables and chairs and the bare wooden beams of More’s Tudor estate in Chelsea, which eventually morphs into the executioner’s scaffold and steps that More will climb to face his death and his God.

The changes in More’s political status are signified throughout the play by his wardrobe. When he first appears, Langella strikes an imposing figure, striding the stage in a gown of velvet and brocade and layers of rich regalia. Later in the play, much is made of the bestowal and the eventual removal of his chain of office as the Lord Chancellor. At one point, he appears dressed in a monastic robe, having come from the chanting of the Divine Office in a nearby monastery, and he must quickly change into proper attire to welcome Henry to his home. By the end of the drama, however, the body that seemed so tall and robust is wearing only a thin grey prisoner’s gown as he limps to the scaffold, almost as bare and fork’d an animal as Lear on the heath.

The most noticeable change in this new production is the removal of a major character, the Common Man, a figure borrowed from the theater of Bertolt Brecht, who addressed the audience directly with ironic comment throughout the play. He did not appear in the 1966 film version for good cinematic reasons, and his absence from this revival is justifiable as well. While he provided occasional comic relief as well as social commentary, his remarks were rather heavy-handed statements of Bolt’s themes. But one of this sardonic observer’s comments survives, quoted in a note at the end of a calendar of historical events in the current production’s Playbill. The note reads: “It should be remembered that A Man for All Seasons deals with ‘an age less fastidious than our own. Imprisonment without trial, and even examination under torture, were common practice.’”

Watch a roundtable discussion of "A Man for All Seasons," and read Americas reviews of the original play and film.

Michael V. Tueth, S.J., is a professor of communication and media studies at Fordham University in New York City.

Show Comments (
2
)
Comments are automatically closed two weeks after an article's initial publication. See our comments policy for more.
David Pasinski
14 years 2 months ago
I've loved this play from first reading and viewing as a high schooler-- and the "Common Man" spoke to me. I missed him in the movie as a distinct character but saw enough glimpses to feel that identification. I disagree that his presence was simply "heavy-handed." I think it is not just a loss of the artistic integrity of the original (who would be cut out of "Hamlet"?)but of a challenge for the less subtle of us to see how we measure up to his final cynicism , perhaps paraphrased -- "don't fret about these things and just be like me and die comfortably in your beds."
14 years 2 months ago
Mike Tueth's excellent review of Bolt's A Man For All Seasons glossed over one salient line of Cardinal Wolsey's in his scene with More: There is much in the church that needs reformation." That idea is as pertinent today as in Tudor England. Has nothing changed in 500 years?