One War at a Time: The case for selective conscientious objection 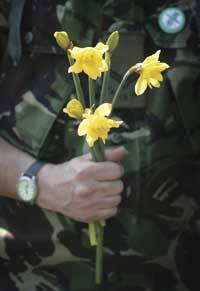 It is perversely ironic that we Americans, even those who profess opposition to war, generally glorify the people who fight our wars. In contrast, we usually treat conscientious objectors with undisguised disdain. They are, in the minds of many, malingerers, shirkers, cowards, even traitors, not models of principled rectitude and courage.

Not until the day comes when conscientious objectors are seen to be contributing to society rather than evading sacrifice will they be accorded acceptance and respect. And only then will the possibility of discrediting and eliminating war as a preferred instrument of statecraft become a realizable ideal. The path to that end lies in the legitimization and institutionalization of selective conscientious objection: the currently unaccepted right of those in uniform to formally express their objection to, and refusal to serve in, particular wars.

At present, such selective opposition is proscribed by law. The legal provision covering conscientious objection, found in the Military Selective Service Act, reads: “Nothing contained in this title...shall be construed to require any person to be subject to combatant training and service in the armed forces of the United States who, by reason of religious training and belief, is conscientiously opposed to participation in war in any form.”

The key phrase “war in any form” is further clarified in Pentagon policy: “An individual who desires to choose the war in which he or she will participate is not a Conscientious Objector under the law. The individual’s objection must be to all wars rather than a specific war.” Thus, an individual opposed to serving in a particular war—one badly conceived or wrongfully conducted for instance—must, in order to be honorably discharged or assigned to noncombatant duties, demonstrate convincingly that he/she opposes all war, or be willing to face dire consequences (court-martial and possibly prison), or take more drastic action—like deserting, going absent without leave, missing troop movement or disobeying an order. For someone not opposed to all war (especially wars of necessity) and otherwise willing to serve this country in uniform, the current situation poses an intractable dilemma that argues for legalizing selective conscientious objection.

Reasons for a New Law

The need for selective objection is rooted first in the fact that the machinery of war in this country is seriously broken. All recent U.S. presidents have sought to expand and exercise their war-making powers at the expense of Congresses that consistently have favored political and ideological loyalties over their constitutional duty to check and balance executive excess. Congresses have gone to extraordinary lengths to avoid the politically risky responsibility for declaring wars and then for ending them. And the Supreme Court, abjuring its prerogative for judicial review, has resolutely refused to rule on the legality of particular wars. Thus the constitutional superstructure meant to tether the dogs of war provides precious little protection to those in uniform, the pawns of war.

The need for selective objection also rests on the contractual relationship between military personnel, the government and society. The written contract governing the men and women in uniform is their oath of office, which binds adherents to support unreservedly and defend the Constitution and obligates them to obey the lawful orders of the president and other superior officers. All in uniform therefore give dutiful, silent obedience and tacitly accept restrictions on individual rights in return for lawful, constitutional behavior by those above them in the chain of command.

But there also is a tacit social contract of mutual rights, obligations and expectations. This unwritten contract implies that in return for giving dutiful obedience and giving up certain rights, military personnel have a right to expect and receive from their superiors behavior that is not only constitutional and legal, but also ethical, competent and accountable. Where government (including the military chain of command) fails on any of these counts, the contract, and with it the reciprocal obligation for dutiful obedience and forgone rights, is broken.

Two other factors underscore the need for selective objection. Most notably, contemporary wars are no longer wars of necessity; they are, without exception, wars of choice. Yet conscientious objection is predicated on the unexamined notion that the wars we fight are wars of necessity, involving a one-way relationship of government rights and individual obligations. When wars of choice are the norm, however, when survival is not at stake and emergency conditions do not prevail, the reverse of this relationship is called for: one in which government is obligated to act responsibly and competently, while individuals in uniform retain the right not to serve (or honor their commitment) when government fails to meet its obligations.

Another factor underscoring the need for selective conscientious objection is, counterintuitively, America’s volunteer military. Historically, conscientious objection has been tolerated principally because of its relationship to conscription. Some would argue that conscientious objection does not and should not apply to volunteers who have joined the military of their own volition, eyes wide open, knowing full well what to expect. Of all people, they should be willing to forsake certain rights, defer unquestioningly to higher authority and face the ultimate sacrifice.

It is instructive, however, to remind ourselves that Title 10 of the United States Code specifies the mission of the U.S. Army as not simply to wage war, but to be “capable...of preserving the peace and security, and providing for the defense, of the United States.” Arguably, therefore, the law is on the side of those in uniform who volunteer to defend their country as a matter of necessity, not to fight wars of choice wrongly undertaken or wrongfully prosecuted.

Purposes It Would Serve

Selective conscientious objection would serve three major purposes. First, it would protect military personnel by according them the most fundamental right any party to a social contract deserves: the right to withdraw from that contract (or seek redress) if the other party—the government in general, the military in particular—breaks or fails to honor it.

Second, it would serve, in the absence of conscription, as a much-needed internal moral compass for U.S. war-making. Ideally, conscription serves this purpose by creating stakeholders throughout society—especially among elites otherwise disinclined to serve or have their offspring serve—who are willing to scrutinize and restrain the use of military force. But since conscription seems destined to remain a vestige of America’s past, selective objection would be a surrogate, the presumption being that legalizing the practice would embolden those in uniform—war’s ultimate stakeholders—who object to wrongful and wrong-headed wars to express their opposition formally. At some point, a critical mass of such internal opposition might be reached that would force lawmakers and society to take notice and act.

Third, selective objection would place a premium on deliberative reason, rather than religious (or religious-like) belief, and thereby serve the embedded aim of producing individuals in uniform who are civically engaged and civically competent, not simply true-believing followers of religious or ideological dogma.

If ever there was a time to put a system of selective conscientious objection in place, it is now. Otherwise, individuals of conscience who are courageous enough to step outside the obedient herd will continue to attract undeserved opprobrium, war will persist as our eternal lot, and we will have only our own silent indifference to blame.

Gregory D. Foster is a professor at the National Defense University, a West Point graduate, and a decorated veteran of the Vietnam War.

Show Comments (
3
)
Comments are automatically closed two weeks after an article's initial publication. See our comments policy for more.
LAWRENCE DONOHUE MD
14 years 2 months ago
Dr. Foster’s thesis that this country needs uniformed individuals, civically engaged and civically competent, is refreshing when so much of the recent debate challenged the patriotism of those who questioned the rationale for the Iraq invasion. My cynicism is reduced when Dr. Foster’s opinions, expressed in public media for more than ten years, have not precluded him from having a senior faculty position at the National Defense University. He has his bone fides as a West Point graduate who served as an infantry company commander in Viet Nam. The ill-conceived and executed Viet Nam conflict perhaps was shortened because stakeholders with political power questioned and ultimately prevailed in changing public opinion. Dr. Foster asserts that selective conscientious objection would extend this political power to our military volunteers, many of whom have not had or recognized that they had political power to wield. Sincerely,
tony marinelli
14 years 2 months ago
Dr. Foster's article will become required reading in my high school Theology classes. As a teacher and pastoral minister, it is impossible for me to encourage students who want to join the military because there is no recourse to selective conscientious objection. The Pope and the U.S. Cathlic bishops argued that the invasion of Iraq would not be morally justifiable. What is a Catholic soldier to do? (S)he is put in the untenable position of having to be faithful to the guidance of the Church or to his superiors. Dr. Foster's article clearly re-iterates what the bishops have already said but does so from the perspective of a man with extensive military experience. Perhaps the bishops should join their voices with new urgency on this important issue.
14 years 1 month ago
This is a good idea, but there is a shortcoming in the rational presented. Specifically, who is the final judge of whether the government's actions are constitutional, ethical, competent, etc? Who decides if the situation is so dire as to constitute an emergency (= war of necessity)? Getting a law passed where each individual soldier is allowed to make that decision would seem to be pretty unlikely. The author does touch on one idea that could work: how about making the right to selective objection depend on whether or not congress has formally declared war? If members of congress aren't willing to back the president when he decides to use armed force, then soldiers should be allowed to opt out of that action. All we need now is someone to sponsor a bill. Too bad we don't have Fr. Drinan in congress any more.