Questions for the Candidates II: The financial crisis and other pressing domestic issues

Questions for the Candidates II: The financial crisis and other pressing domestic issues 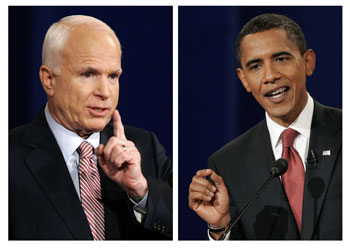 As the poet Robert Burns once reminded us, the best laid plans are simply those: plans. In politics, plans are always changing to accommodate a political reality that in the information age can shift directions faster than a wildfire. This was certainly true on Sept. 26 during the first presidential debate of the 2008 general election. The forum was supposed to have been focused on foreign policy, but the first third or more of the meeting necessarily focused on the worsening news from America’s financial sector and what Washington should or could do to fix its problems.

The red-hot news cycle means that there is even more reason to make sure that in the remaining debates voters have some opportunity to see not only the candidates’ responses to the press of events, but also their personal philosophies, the underlying political principles that will guide their decisions as president. To that end, America’s editors recently presented ten sets of questions on foreign policy for the consideration of the moderators and candidates. Below are ten similar sets of questions focused on domestic concerns. The next meeting between the candidates on October 7 will be conducted in a “town hall” format, the topics chosen at random by the citizen-questioners. The final debate on October 15 will be a moderated forum with questions from journalists on domestic policy. At least, that is the current plan.

1.    Both of you have spoken of greed as one cause of the current financial crisis. In your judgment what is the difference between greed and a morally legitimate pursuit of profits in a capitalist system?

2.    Do you believe that the current financial crisis is an inevitable consequence of an inherent boom/bust tension within capitalism, or could it have been avoided? If it could have been avoided, how? What steps might you take as president to ensure the American people that it will not happen again?

3.    Since the days of the Carter administration, deregulation has been a bipartisan policy. Yet if government regulations for financial institutions had required more transparency and clearer disclosure to borrowers as well as investors, many argue that the present crisis may have been averted. Do you support re-regulating the financial sector to require more transparency by banks and marketers of securities?

4.    The cost of the projected buyout of the financial markets is an astonishing $700 billion. The federal treasury may recover the majority of that money through the future re-sale of the securities it will purchase. Yet is likely that $100 billion or more of the taxpayers’ money is gone forever. Can you explain to the American people why the federal government appears to have $100 billion or more to spend on this bailout while voters are also told that the government does not have the $50-60 billion required to extend universal health coverage to every American? Can you explain how the federal government can morally justify this bailout while simultaneously seeking to reduce Medicaid spending by $15 billion over the next five years?

5.    There has been much fear in recent weeks that the current financial crisis may cause a recession that would rival the Great Depression in its severity. Yet for many Americans that is a merely academic question. Thirty-six million Americans already live in poverty, 15 million in extreme poverty, according to the U.S. Census Bureau. Thirty-five million Americans are classified as food insecure, meaning they cannot afford groceries. According to government figures, 16 million American households either paid more for rent than the federal government considers affordable or live in crowded or substandard housing. In your judgment, do these statistics also represent a failure of America’s economic system? Do you believe that they present the world’s wealthiest nation with a moral challenge? If so, why are these concerns seemingly absent from our national political debate?

6.    There are currently 12 million undocumented workers in the United States. Raids of workplaces by federal officials as well as the rate of deportations have increased dramatically, frequently resulting in the separation of children from their parents. One U.S. Catholic bishop has said, “The humanitarian costs of these raids are immeasurable and unacceptable in a civilized society.” Do you agree with this statement? If so, what steps would you take to address this concern?

7.    Both of you have spoken of the importance of faith in your lives and about how faith affects your worldviews and your judgments. Both of you have also said that it is not appropriate for a political leader to “impose” his or her moral or religious views on others. What do you believe constitutes such an imposition? Is it consistent, for instance, for a political leader to denounce the immorality of torture but reserve his or her moral judgment on abortion?

8.    Currently, over 100 new coal-burning power plants are in the planning stages in the United States, yet the burning of coal is a major contributor to global warming. You have both spoken of the need for a new national effort, similar in kind to the space program of the 1960s, to develop cleaner, greener technologies. Do you believe that such a major national effort will require an economic or political sacrifice on the part of America’s energy industries? Will it require a personal sacrifice on the part of individual Americans? If so, what?

9.    Only 25 countries in the world carried out state-sponsored executions last year. Of these, the most state-sponsored executions took place in China, Iran, Iraq, Pakistan, Sudan and the United States. Are you comfortable with the United States keeping this company? Does the fact that capital punishment is a practice we share only with some of the world’s most oppressive regimes give you pause?

10.    Do you believe that it is ever morally permissible to create a human life, for any purpose, with the certain knowledge that such a life will be deliberately destroyed? In your judgment, what are the moral criteria that must be met to justify the deliberate taking of a human life?

Show Comments (
3
)
Comments are automatically closed two weeks after an article's initial publication. See our comments policy for more.
Paul Louisell
12 years ago
I am amazed at the naivete expressed in this article and many others I have read in your publication concerning economic issues. The $80 - $100 Billion to provide universal health care - is that an annual figure? Where did that come from? The bailout is a one time proposition. I seriously doubt that $80 - $100 Billion will cover the cost of universal health care forever. Particularly where the government assumes even more control of the medical reimbursement system than it already has. It is not a government's function to provide charity. Charity is, by definition, a sharing of one's talent, time and treasure with another. It involves an individual choice. Not a tax-enforced policy. Sorry, America. Capitalism is not evil. It is not good. It just is. Christ didn't come to change political or economic systems. He came to save individuals, one soul at a time. Look at the good done by individuals who became wealthy through capitalism and then properly shared that wealth with others (in part, by avoiding confiscatory taxes). That is the true meaning of charity. Socialism has proven time and again to be a failure when applied to
David Riesbeck
12 years ago
So, Paul, I suppose you would propose that we eliminate all taxes, eh? After all, you and I both need to have our money confiscated in order to pay for the roads that we drive on, to maintain even a semblance of access to reasonable education for people who don't start out with wealth, for police forces and international defense, and a whole host of other measures that serve the common good. Why shouldn't universal access to the basics of health care be included in the common good? As I see it, you have two options: 1) explain why it shouldn't; 2) deny that it is legitimate for laws to require individuals to contribute to the common good. If you deny 2, you'll be about as weird a Catholic as a Catholic who thinks Jesus was just a very good human being; if you deny 1, you'll be forced to produce some very twisted and convoluted arguments indeed. Whatever the truth of your bizarrely individualistic soteriology, the simple fact of the matter is that this is not primarily a theological question, but a moral and political one. If you think that taxation schemes geared toward promoting the common good make for 'socialism,' you're far more naive and simplistic than the editors of America -- however naive and simplistic they are or are not, at least they're asking the right questions.
N & T CHISHOLM
12 years ago
All good questions. None have been answered and the moderators are persistently mere entertainers, chickens really or bland at best. They will never ask those questions with possibly the exception regarding 60 billion and universal health care. I am on my way to work in the "free clinic." Peace be to you , to us, to the world. Next time, nuclear arms, Israel and MAD.

This article also appeared in print, under the headline “Questions for the Candidates II,” in the October 13, 2008, issue.