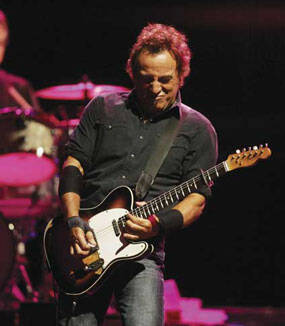 What’s better on a warm summer night in New Jersey than spending a few hours with some close friends? For many vacationers, that would mean a weekend party at the Jersey shore. But for more than 150,000 concertgoers over three nights in the last week of July, it meant time with “The Boss.”

As his international “Magic” tour wound down with three shows at Giants Stadium, Bruce Springsteen took his fans down memory lane, featuring infrequently performed songs, along with songs from earlier albums chosen in tribute to the recently departed Danny Federici of the E Street Band.

At this stage in his career, some things have changed for Springsteen. With his face a little craggier and lined and his hairline a bit higher, he is still a commanding stage presence. He no longer bounds into the air during guitar solos, yet he managed a rock star leap of sorts with his daughter, who joined him on stage at one performance for a closing cover of “Twist and Shout.” And he still slides across half the stage on his knees. Also, while his four-hour marathon concerts may be in the past, Springsteen remains the only performer who can play for more than three hours and leave his audience wanting more.

Things have changed for his audience, which is now intergenerational. The “pit” in front of the stage was largely populated by 20- and 30-somethings, but there were also many older people, as well as their grandchildren. Even with occasionally rowdy calls for “Bruuuuce,” the atmosphere was sedate and mellow rather than transgressive. Preconcert tailgate parties featured plenty of beer but few whiffs of any illegal substances.

Fans always leave a Springsteen show tired but exuberant. This time they were even more exuberant than usual. Many song selections were buoyant, like “Mary’s Place,” “Sherry Darling” and “Waiting on a Sunny Day,” and few hinted at the darkness that always seems about to overtake Springsteen’s protagonists. At the July 28 show, one of the few songs with dark overtones was the rarely performed “Hungry Heart.” But the Boss took the edge off, first by treating it as a sing along, and then by turning the microphone over to two small children in the audience to lead the refrain. Having an eight-year-old sing about marital angst was a rare miscalculation.

In some ways the show was a family affair. Springsteen encouraged the crowd in its weak version of “Happy Birthday” for his wife, E Street Band member Patti Scialfa. He left the stage to embrace his daughter during the wistful “Girls in Their Summer Clothes.” And Max Weinberg’s son came onstage to play the drums during “Born to Run.”

Most of the band members had a chance to shine individually. Appropriately, Scialfa took center stage for “Tunnel of Love”; Springsteen and Little Steven Van Zandt shared vocals on several numbers; Nils Lofgren was more animated than usual—even doing a flip during one of his solos; and Clarence “Big Man” Clemons had his usual elaborate introduction.

Still there is never any doubt about the real star. Springsteen spent more time on the apron of the stage playing to the audience in the pit and touching outstretched hands than he generally does. No other band member even ventured onto the apron except during the ovations at the end of the main set and the encore.

For the most part, the polarities of Springsteen’s pervasive themes—the search for authenticity and community that is more a dream than a reality; hope always on the verge of being crushed; passion ever falling short of fulfillment—were swept away by the show’s good-time atmosphere.

His haunted protagonists on albums until “The River” are shadowed by doubt, uncertainty and threat, themes he later confronts more explicitly on “The Ghost of Tom Joad,” “The Rising,” “Devils and Dust” and “Magic.” But the angry young man of “Badlands” is now singing to a grayer, paunchier choir—the “old, bald fans” he acknowledged at Thursday’s show. At least for one night, the audience put aside its compromises and sang out, “No retreat, baby, no surrender.”

The darker elements of Springsteen’s oeuvre were relegated to the background on this summer evening. His contemporaries, who haven’t been carded in decades and who are more likely to be the ones hiring and firing than the ones being hired and fired, sang along with “Promised Land” without irony. Skeptics might find hearing 50-somethings roar, “Mister, I ain’t a boy, no, I’m a man” akin to the Republican appropriation of “Born in the USA” as a campaign song back in the 1980s. But the Boss’s fans—true believers all—know that middle age does not end the search for authenticity and community.

The different character of this concert was evident throughout the show. Politics took a back seat in Springsteen’s patter. While he did refer to rendition and the suspension of civil rights—“When I was a kid, these were the kinds of things that only happened someplace else, not here”—his tone was matter-of-fact, almost resigned. During this show, the only time he claimed the mantle of prophecy was jokingly, in reference to a song he wrote about gas prices after the energy crisis of the late 70s, “Held up Without a Gun.”

In one of the set pieces on the “Devils and Dust” tour, Springsteen adopted the persona of an evangelist promising to take his congregation “down to the river…to resuscitate, to rejuvenate, to re-vivify, to reliberate, to re-educate, to re-sexualate [you]”—every “R” word, it seems, except “resurrect”—“[with] the power, the promise, the majesty, the mystery, the ministry of rock and roll!…. Unlike my competitors, I don’t promise you life everlasting—but life right now!”

Yet his version of the theological virtues stands against a purely human horizon. More characteristic of the show is “Detroit Medley,” which replaced most of his songs of outrage; he didn’t play “Born in the USA” in any of the three shows. Once he smuggled in his critique of the social order with two plaintive songs, “The Last to Die for a Mistake” and “Livin’ in the Future.” Otherwise, a rollicking cover of “Summertime Blues” was the closest thing to a protest song.

Springsteen’s optimism and idealism were always the horizon of songs like “Badlands” and “Promised Land.” The language of faith and hope became more explicit in “The Rising,” and religious imagery emerged in “Devils and Dust.” These themes were less prominent on this tour, but Springsteen’s vision of social justice is implicit in “This American Land.”

Returning home after a long tour, Springsteen had chosen songs of passion and good times, built on a foundation of hope and optimism, of joy and maybe even faith. For three summer nights in New Jersey, Springsteen delivered on his promise of “life right now!” His homecoming party was about as good as one can expect.

At the end of the day, though, many of us hope for more than that; we yearn for transcendence. Bruce Springsteen delivers on the yearning and touches the edges of religious language and imagery. His vision of love has already evolved. Will he ever address the themes of redemption and resurrection? We can only hope.

From the archives, "The Catholic Imagination of Bruce Springsteen," by Andrew M. Greeley.

Joseph Gerics is associate superintendent for secondary education for the Archdiocese of New York.

Show Comments (
1
)
Comments are automatically closed two weeks after an article's initial publication. See our comments policy for more.
13 years 11 months ago
Fans of Bruce Springsteen who want to revel in the observations of fellow followers might want to pick up the book "For You", a limited-run, hardcover volume with hundreds of concert photos. Primary text: recollections about first shows and memorable moments. The Boss himself might like to read it. Foryoubruce.com