Steps Toward Justice: What is the purpose of charitable works?

Steps Toward Justice: What is the purpose of charitable works? 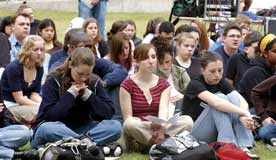 Here is what Father Arrupe said in his speech to the International Congress of Jesuit Alumni of Europe in Valencia, Spain, on July 31, 1973:

Arrupe’s hopes were that graduates would have grander ambitions than simply their own material advancement, that they would use their knowledge to recognize and meet the needs of others and that their labor on behalf of others would be born of a relationship with God and his Christ. By putting on the mind and heart of Christ, graduates, like all Christians, are to live as embodiments of Christ, the pre-eminent “man for others.” If Christians want to live and love in a Christ-like way, they must be committed to helping others realize their potential. That is what love does: it helps others to thrive as true human beings.

Unless Christians first walk the path of justice, however, any talk of love is idle chatter. If love helps people to thrive, justice allows them first to survive. Justice is the bare minimum of love. It guarantees that people have what they deserve—like nourishing food, suitable clothing, decent housing, access to standard medical care and employment that offers fair wages and safe working conditions—simply because they are human beings. These things help to put flesh on the prized rights to life, liberty and the pursuit of happiness.

Christians must be careful about how they think and talk. There is much said about doing “works of charity,” but Pope Benedict XVI’s words in his first encyclical, God Is Love (No. 26), warrant consideration:

Works of charity…are in effect a way for the rich to shirk their obligation to work for justice and [are] a means of soothing their consciences while preserving their own status and robbing the poor of their rights. Instead of contributing through individual works of charity to maintaining the status quo, we need to build a just social order in which all receive their share of the world’s goods and no longer have to depend on charity.

These ideas echo earlier church teachings, such as: “Charity will never be true charity unless it takes justice into account.... Let no one attempt with small gifts of charity to exempt himself from the great duties imposed by justice” (Pius XI, 1937, Divini Redemptoris, No. 49). And a document from the Second Vatican Council teaches: “The demands of justice must be satisfied first of all; that which is already due in justice is not to be offered as a gift of charity” (“Decree on the Apostolate of the Laity,” No. 8).

These teachings challenge Christians to recognize that there is no way to meet the responsibilities of love so long as they fail to satisfy the demands of justice. Christians are masters of self-deception if they see themselves as practicing love while making no attempt to correct the injustices that oppress their neighbors. Without justice, love is just a word.

Charity, or a Step Toward Justice?

In light of such teachings, the activities we call works of charity—like food and clothing drives, maintaining soup kitchens and shelters, involvement in Habitat for Humanity—might better be regarded as steps toward justice. These are ways we try to provide people with the bare minimum they deserve as human beings, but they are only emergency responses to their immediate needs. Since these are largely short-term interventions, they remain short-sighted, treating only the symptoms, not the causes of the pain and deprivation many suffer. While good and necessary, such activities are not enough. They may leave people trapped in oppressive social structures. Ultimately, the structures themselves must be challenged and improved.

Admittedly, challenging a country’s prevailing social, political and economic structures is an unappreciated endeavor. As Dom Helder Câmara, the late Brazilian archbishop, noted: “When I give food to the poor, they call me a saint. When I ask why the poor have no food, they call me a Communist.”

Still, if we are honest with ourselves, it is hard to deny that we allow the structures of society to do to others what we ourselves would never think of doing to another person face to face. We live amid social sin, which is not just the doing of evil, but also a failure to do the good required. Love’s long journey lasts a lifetime, but the works of justice mark its first steps.

Show Comments (
2
)
Comments are automatically closed two weeks after an article's initial publication. See our comments policy for more.
12 years ago
Dear America: The section quoted by Fr. Genovesi from Benedict's XVI's great encyclical, Deus Caritas Est, is grossly misleading. The section he quoted is immediately preceded by the sentence, "Since the nineteenth century, an objection has been raised to the Church's charitable activity, subsequently developed with particular insistence by Marxism: the poor, it is claimed, do not need charity but justice." and immediately followed by the sentence "There is admittedly some truth to this argument, but also much that is mistaken. " The sentences Fr. Genovesi quoted clearly represent an argument that the pontiff is mentioning only to disavow and criticize. To represent this extreme social justice view as papal teaching is a distortion so great as to rise to the level of a lie. America's editorial oversight must also be very weak or non-existent. The passage Fr. Genovesi quoted struck me as very odd given what I remember of the encyclical and I was able to find the full context in less than five minutes. Did anyone at America bother to check Fr. Genovesi's references? The magazine squanders its credibility when it represents as true what is patently untrue. If there were any justice, Fr. Genovesi would publicly apologize to the readers of America for misleading them. John G. Hissong, Ph.D., M.D.
EDWIN DUYSHART
12 years ago
I loved it. Reading it gave my spirit a boost. It is most certainly a message that needs to be shared!
Advertisement

This article also appeared in print, under the headline “Steps Toward Justice,” in the September 15, 2008, issue.