For the Sake of Unity: Will disagreements tear apart the Anglican Communion?

For the Sake of Unity: Will disagreements tear apart the Anglican Communion? 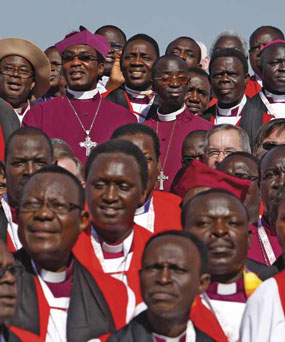 During a recent debate at the Church of England’s General Synod, N. T. Wright, the Scripture scholar and bishop of Durham, summed up the crisis facing the Anglican Communion rather graphically. “We are living through, on many levels, a massive outworking of the law of unintended consequences,” he said. “Or, in plain English, a slow-moving train wreck.”

Bishop Wright is a touchstone theologian for traditionalists. He opposes women bishops, noncelibate gay clergy and the blessing of same-sex unions—the hot-button issues that have plunged the Anglican Church into possibly the greatest crisis in its history. But that does not mean he supports the decision by 280 conservative (or “Bible-believing”) Anglican bishops of the developing world to form their own communion-within-a-communion at Jerusalem a few weeks ago in defiance of the authority of the Archbishop of Canterbury. Bishop Wright likes neither the Global Anglican Future Conference bishops’ spurning of that authority, nor their claim to be more faithful to the Bible, nor their demand that other Anglicans sign on to their 14-point declaration of Anglican orthodoxy. Bishop Wright is a Church of England conservative evangelical, rather than an African or Australian one; and in the current meltdown, that is just as important a difference as those between liberal and conservative Anglicans, or Catholics and Protestants.

As the Lambeth Conference of Anglican Primates, which is held every 10 years, meets in Canterbury (July 16-Aug. 3) against a backdrop of what journalists are calling the “summer of schism,” it is worth noting that the cause of the current Anglican crisis is not disagreement over homosexuality. Most Catholics as well as nonbelievers I know have strongly diverse views about same-sex blessings, civil partnerships and gay adoptions; homosexuality is one of the great divisive issues of our age.

But disagreements do not necessarily lead to divisions or crises. The real question is why the Anglican Church has not been able to contain the disagreements, and why they are causing the church to tear itself apart.

Consider the uniqueness of the historical project of the Church of England, an attempt—intrinsically flawed, to some; to others, heroic—to contain under a single roof the different traditions within Christianity. There are many rooms in the Anglican mansion. “Enlightened” Protestantism (which describes most Church of England bishops) co-exists with “evangelical” Protestantism (which describes much of the clergy and laity); the first stresses reason, the second biblical authority, while Protestant elements operate alongside Catholic ones.

The Anglican Catholics are in turn divided between “liberals” and “traditionalists,” grouped in such organizations as Affirming Catholicism and Forward in Faith. Liberals, whether Catholic or not, favor women priests and bishops, and a change in church policies on homosexuality, because they believe it is part of the church’s job to keep pace with the historical movements for emancipation. Conservatives, whether Anglo-Catholic or evangelical, are against adapting to the age. The Bible tells the evangelicals otherwise, while Anglo-Catholics believe that if Anglicanism should adapt to anything it should be the Catholic and Orthodox Churches of which they believe themselves to be a part.

All can give good reasons for their beliefs, and traditionally all can be accommodated—messily, awkwardly, often with extreme bad grace and sometimes only with imaginative 11th-hour compromises. In Britain, it is almost a national sport to watch the different parties maneuvering around the field at synods. You can almost hear the amazement each time the Church of England pulls clear of schism at the last minute—like the gasps that accompany goals before the final whistle.

Church of England Anglicans are proud of this capacity for compromise, which is bound up with the project of political liberalism. As a national church its task, subject to the will of Parliament with the Queen as its head, has been to bend and adapt to cultural developments. There has been the odd exodus—the evangelical rebellions of the 18th century against “worldly” bishops, which led to Methodism and emigrations to Virginia, or the 19th-century Anglo-Catholic protest, which caused some to cross the Tiber—but on the whole Anglicans stay put. They know the rules: you fight hard, but must be ready to bargain and compromise.

In recent decades, however, the Church of England has been shrinking as fast as the Anglican Church in former British colonies has been growing. These days the average Anglican is more likely to be a struggling African farmer than a lady making cakes for a sale at her English village church. The gravitational center of Anglicanism has drifted southward, to countries where the church is not part of a liberal political project, and where excessive compromise and nuance mute its proclamation of the Gospel. Just as important, the old alliance between church and culture has been broken in England by the rise of secular attitudes and lifestyles: cultural Anglicans believe they have found better things to do on Sundays than worship. The case for bending to culture in order to “baptize” it is therefore looking much weaker, and the Church of England’s authority within the Anglican Communion is correspondingly reduced.

While the Anglican Communion has come of age, what holds it together is not structures, but rather fellowship and a shared cultural history. There is almost nothing that can force the “enlightened” North Americans, who see gay emancipation as a matter of historical justice, to coexist with developing-world evangelicals, for whom homosexuality is an abomination deplored by Scripture. As long as former colonials were taking their cue from the Church of England, the absence of structures was not fatal. But at the last Lambeth Conference, in 1998, concerned about the Church of England’s growing acceptance of homosexuality and what they saw as a betrayal of Scripture, a lobby of bishops from the developing world moved to “save the church” from the forces of secularism. They pushed through Resolution 1:10, which declared that homosexual practice was “incompatible with Scripture.”

This was precisely the kind of unambiguous statement of doctrinal clarity that Anglicanism has been at pains to avoid. Not only was it unacceptable to large numbers of Anglicans in the North; it could not be imposed, because Lambeth resolutions are not binding until they are accepted by member churches.

Resolution 1:10 emboldened the evangelicals to take a stand against the blessing of same-sex unions, authorized by a Canadian diocese in 2002, and against the acceptance of a noncelibate priest, Gene Robinson, as a bishop a year later by the Episcopal Church, in the United States. As Africans and Americans declared themselves out of communion with each other, the Archbishop of Canterbury, Rowan Williams, struggled to establish firmer boundaries within the Anglican Church but without giving himself “papal powers,” as he put it to a journalist in Rome a few years ago. The 2004 Windsor Report of the Lambeth Commission on Communion was an impressive attempt to introduce a more Catholic ecclesiology through covenants and a jus commune, but it was largely ignored.

The bishops of the global South, meanwhile, demanded “restorative discipline” for the North Americans and their expulsion at Lambeth 2008 if they did not “repent.” Although Archbishop Williams has not invited Bishop Gene Robinson to Canterbury, he has made it clear that expulsion is not what Anglicans do. When Archbishop Williams decided a few months ago to arrange the meeting of the primates as a listening exercise, rather than to set up a series of debates followed by resolutions, the disaffected evangelicals decided to act. Seeing that Archbishop Williams had no intention of disciplining the Episcopal Church, they headed to Jerusalem for the Global Anglican Future Conference.

The Fellowship of Confessing Anglicans founded in Jerusalem in June by the churches of the global South is the next step in what the developing-world evangelicals see as their way to save Anglicanism. If the Anglo-Catholic movement of the 19th century sought to recover the national Catholic Church of Henry VIII, FOCA has in mind the Elizabethan Protestant version of Anglicanism, with its Book of Common Prayer and 39 Articles. FOCA rejects not only the “false Gospel” of the North American Anglicans and their “unscriptural” endorsement of homosexuality, but also what they call the “colonial” domination of the global Anglican Church by “northern, liberal mentalities.” The new network includes 280 bishops of African, South American and Australian churches, which include as many as half of the Anglican Church’s 80 million believers. Its rejection of the two instruments of communion—Archbishop Williams’s authority (“We do not accept that Anglican identity is determined necessarily through recognition by the Archbishop of Canterbury,” reads the Jerusalem declaration) and the Lambeth Conference (which they are boycotting)—means that there are now, in effect, two parallel Anglican Communions, split along both geographical and ecclesiological fault lines.

The sniping at Archbishop Williams from all sides has been intense. He is accused of giving in to evangelical blackmail, of being a closet liberal, of being a ditherer and a Canute-like figure pondering theological abstractions while the waves crash on the shore. In fact his leadership has been extraordinary, a witness to the influence of Catholicism on his ecclesiology. The easier path is the one of expulsions, or at least of taking one side or another; but he has taken the far harder option of trying to forge a communion out of polarization. He has tried to persuade both the global South and the North Americans to renounce their absolute positions for the sake of unity, and not to move impatiently ahead. He exemplified this when—although personally he is convinced that the church will come to accept homosexual partnerships—he vetoed in 2004 the appointment of a gay friend, Jeffrey John, as Bishop of Reading, because he knew it would inflame disunity. The “pro-gay” lobby accused him of surrendering to evangelical pressure, but they misread the decision. Archbishop Williams was demonstrating that a move too soon—however principled—can destroy unity. He has more than once quoted to both the Episcopal Church and the Fellowship of Confessing Anglicans St. Paul’s words to the Corinthians (1 Cor 11:33) to “wait for one another.”

So far they have not. A willingness to “suffer for the sake of the unity of the church” is something many Anglicans assume only Catholics have to do. The openly gay bishop of New Hampshire, Gene Robinson, is in England, popping up on television and radio to declare that Jesus loves him and that history is on his side, while the Global Anglican Future Conference evangelicals are growling from abroad, convinced the Bible is on their side. Kenosis for the sake of unity is not on the minds of any of them.

But that does not stop two-thirds of the world’s Anglican bishops who are gathering in Canterbury. If at the Lambeth Conference they can listen to each other—and to God—long enough, there may be a chance for Archbishop Williams still to build the structures on which future global Anglican coexistence so obviously depends. Global Anglicanism after the Lambeth Conference may still look like a “slow-moving train wreck,” but there is a good chance, under Archbishop Williams, that it will still be on the rails.

Listen to a conversation with Austen Ivereigh.

This article also appeared in print, under the headline “For the Sake of Unity,” in the August 4, 2008, issue.

Austen Ivereigh, former adviser to Cardinal Cormac Murphy-O’Connor, is a writer and journalist based in London.