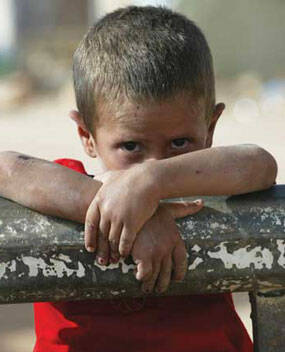 One of the least reported stories of the Iraq war is the story of the humanitarian crisis it has spawned. While the media have covered the military debates, the fighting, the lives of soldiers and the politics surrounding the war, they have left largely untold the stories of close to five million displaced Iraqis. The total includes the more than two million Iraqi refugees who have fled to nearby countries, mostly Syria and Jordan, and the 2.7 million noncombatants still within Iraq who have been driven from their homes. Most were trying to escape the generalized violence of war, but many others have experienced direct persecution or threats to themselves or a close family member.

According to the U.N. High Commissioner for Refugees, 77 percent of the Iraqi refugees surveyed in Syria have endured aerial bombardments, 80 percent have witnessed a shooting, 68 percent have been harassed by militias, and 75 percent knew someone close to them who had been killed. Individual accounts of persecution are harrowing. Twenty-three percent have been kidnapped, 22 percent have been beaten by insurgents, and 16 percent have been tortured. Former employees of the U.S. military in Iraq, who worked as interpreters, drivers or cooks, have fled because of fear of imminent death or because of the murder of a family member. Religious and ethnic minorities also have endured persecution.

Despite such traumatic experiences, many Iraqis hope to return to their homes one day, though right now the prospects for a safe return are not bright. Integration into Syria, Jordan or another host country is problematic. Resettlement to another country, like the United States, has not been offered to sufficient numbers of Iraqis to protect even the most vulnerable.

In the fiscal year 2008 emergency-spending bill, for example, the Bush administration has requested only $240 million to assist displaced Iraqis, out of a $196 billion total for the Iraq war. Of the two million Iraqi refugees outside Iraq, fewer than 5,000 have been resettled in the United States. That was not the plan. By the end of December 2007, the United States had welcomed only 2,647 of the 12,000 people it promised to resettle in this budget cycle. Last fiscal year, the United States resettled only 1,608 refugees out of a pledged 7,000. Clearly our government must do more.

The rest of the world also can do more. According to the U.N. Office for the Coordination of Humanitarian Affairs, Iraq ranks almost at the bottom—second-lowest—in terms of the money allotted per person. Of the $261 million requested by the United Nations for Iraqi refugees for 2008, seven countries (other than the United States) contributed a total of $10.2 million. Many of the Persian Gulf states have contributed nothing to the effort, explaining that they will not commit funds until Iraq itself gives more help to its own people.

Jordan and Syria are showing the strain of hosting Iraqi refugees, asserting that their governments have already spent $1 billion each on the effort. Initially these two countries kept their borders open to the inflow, but they have shut them periodically and at times denied entry to Iraqis. The arrival of new refugees has overwhelmed the educational and health care systems of both countries.

Even in the host countries, Iraqi refugees and their families remain at risk. Families that fled with money and resources have spent what they brought and are finding it difficult to purchase food and shelter. Men do not venture out to find work for fear of deportation; they leave work to the children, who ought to be in school. Care for mental health problems or cancer, which is prevalent among the refugee population, is becoming less and less accessible.

Some groups are particularly vulnerable. With their husbands either dead or in another country searching for work, women with children are at risk. Orphaned children especially are endangered by human traffickers and smugglers.

Particularly vulnerable among the Iraqi refugees are religious minorities, predominantly Christians. Before the war, between 800,000 and one million Christians—Chaldean Catholics, Assyrians and Armenians—lived in Iraq. Roughly half of the Christian population have fled their homes to other parts of Iraq or neighboring countries. According to the U.N. High Commissioner for Refugees, one-quarter of those who are registered as refugees from Iraq are Christians.

The stories of Christian persecution are chilling. Many Christians in Iraq have been forced to choose between conversion to Islam or death, while converts to Christianity have been killed or tortured. A delegation from the U.S. Conference of Catholic Bishops, visiting the Middle East in 2007, heard about one convert to Christianity who was “crucified” on a tree by insurgents. The delegation was also told that any Iraqi who made the sign of the cross in public would receive death threats.

The recent kidnapping and death of Archbishop Paulos Faraj Rahho of Mosul has only added to the fear experienced by Iraqi Christians, particularly Chaldean Catholics. The killing of such a high-profile victim sends a signal that no Christian is safe in Iraq. The Holy See continues to urge protection for religious minorities within Iraq.

Legislation passed by Congress in January 2008 gives religious minorities a special priority for resettlement in the United States. Yet because of the length of time required for processing and the number of slots available, only a small number of Christian Iraqis have been resettled. Of course, resettlement to a third country is not a long-term solution to the plight of religious minorities in Iraq. These ancient communities deserve to remain in their homeland and to maintain their religious identity.

The Catholic Church, both internationally and in the United States, has responded to the needs of Iraqis displaced within their own country and regionally. Inside Iraq, Caritas Internationalis is one of a few nongovernmental agencies working with the displaced and other vulnerable Iraqis. In neighboring countries, Catholic Relief Services and the International Catholic Migration Commission assist refugees and help them with the paperwork required for resettlement to third countries. Several religious orders, including the Jesuits and Dominican sisters, and members of the Maronite Church serve vulnerable groups, including women and children at risk. In the United States, the Migration and Refugee Services of the U.S. Conference of Catholic Bishops works with local dioceses to help resettle Iraqi refugees.

On the advocacy front, the U.S. bishops have been outspoken in their efforts to win more relief aid and an increased resettlement number for Iraqis. Bishops of the U.S.C.C.B. Committee on Migration have traveled to the region to observe the conditions of Iraqi refugees and have reported their findings to Congress and the Bush administration. The bishops’ Office of Migration and Refugee Services recently produced a report on unaccompanied Iraqi refugee children and other vulnerable groups (both reports can be accessed at http://www.usccb.org/mrs/tripreport.shtml). And recently the U.S. Catholic Coalition for the Protection of Displaced Iraqis, which consists of several U.S. Catholic agencies and religious orders, was formed to coordinate Catholic advocacy in the United States.

A Search for Lasting Solutions

The truth about displaced Iraqis can no longer be minimized or ignored. Host countries feel the pinch, while the displaced and refugees themselves, having spent what little savings they had, need increased assistance. With no possibility of a safe return to Iraq anytime soon and with little prospect for resettlement to third countries, displaced Iraqis are facing a grave situation that could soon reach crisis proportions.

As the leader of the coalition forces in Iraq and as the world’s lone superpower, the United States must step up its efforts to avert an impending crisis. Without U.S. leadership, other nations are unlikely to increase their support. We must provide more assistance, offer more resettlement options and conduct diplomacy to ensure that the essential needs of the lost people of Iraq are met. Success in the Iraq war must no longer be measured only in military terms, but also by how our nation responds to the human misery it has helped to create.

J. Kevin ApplebyJ. Kevin Appleby is director of migration and refugee policy for the U.S. Conference of Catholic Bishops in Washington, D.C.
Show Comments (
1
)
Comments are automatically closed two weeks after an article's initial publication. See our comments policy for more.
lLetha Chamberlain
14 years 8 months ago
We, once proud and strong, now stand totally humiliated in our need--we cannot even support our own poor, who line our streets without food, shelther, or medical care. What are we to do unless we again start seeing our need to create livable jobs and infrastructure so we can again have a livable standards and begin making money again. Yes, Rooseveltian reforms we so shun and make fun of! The whole world needs it--and get rid of the WTO and double the production of food like our REAL leaders say can be done--there is NO need of starvation and plagues, which threaten us in the very newspapers which pour out the stories of despair and fear! When will we STOP this madness and take back the control we CAN have of what is happening to us!