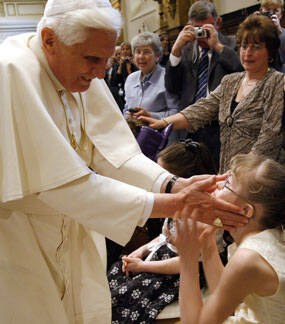 The enduring impression Pope Benedict XVI left with most Americans following his recent visit to Washington, D.C., and New York was of a pastor ministering to his flock. In repeated gestures, from meeting with the victims of sexual abuse to blessing the disabled and speaking with the survivors of the terrorist attacks of Sept. 11, 2001, he showed his desire to heal those who are wounded and broken.

His numerous comments on sexual abuse by members of the clergy demonstrated awareness of the depth of the hurt to victims and their families as well as to the American Catholic Church as a whole. From his confession of shame to reporters during the flight to the United States to his spontaneous acknowledgment of his own human weakness at the Mass at New York’s St. Patrick’s Cathedral, he signaled that like Peter, he is an ordinary Christian who struggles to be a disciple.

Though commentators have often depicted his German heritage as a source of rigidity and heavyhandedness, Benedict’s Bavarian Gemütlichkeit revealed itself with a relaxed smile, and it projected warm joy throughout his public appearances. His natural graciousness enabled him to look those he encountered in the eyes and to listen to them attentively. Though he is known to prefer more traditional liturgical styles himself, he appeared to relish the multilingual, multiethnic liturgical events prepared for him, which are so characteristic of the United States today. His prayer at ground zero was a gem of quiet commemoration, and the visit to the Park East Synagogue on the eve of Passover was a gesture of undiminished goodwill toward the Jewish community.

Just as he came to heal, Pope Benedict also came to unify. His homilies and addresses allowed no gloating by one church faction over another. In addressing the bishops, for instance, he balanced pro-life issues with social justice concerns. “Is it consistent,” he asked, “to profess our beliefs in church on Sunday, and then during the week to promote business practices or medical procedures contrary to those beliefs? Is it consistent for practicing Catholics to ignore or exploit the poor and marginalized, to promote sexual behavior contrary to Catholic moral teaching, or to adopt positions that contradict the right to life of the human being from conception to natural death?” Though Pope Benedict’s critique of American culture—of individualism, secularism, materialism and the cult of untrammeled freedom—was clear, his reproof was consistently gentle: questioning rather than condemning, edifying rather than hectoring.

With his gentle voice and peaceful demeanor, Benedict did not fail to offer a prophetic word to the world. At the United Nations General Assembly, he upheld the necessity of the organization for the defense of human rights and gave new prominence to “the duty to protect,” that is, the responsibility of the international community to intervene when a government either fails to protect its own people or is itself guilty of violating their rights. He made clear that the United Nations serves human solidarity by making the strong responsible for defending the weak.

Pope Benedict also extrapolated a seldom discussed teaching of Pope John XXIII in the encyclical Pacem in Terris—that the legitimacy of governments depends on their respect for and defense of the rights of their people. It is not “intervention,” he argued, that should be interpreted as “a limitation on sovereignty,” but rather “nonintervention” that causes harm out of indifference to the victims of oppression. With international missions foundering in long-lasting conflicts like those in Congo and Sudan, however, the pope’s remarks place the burden on the international community to build the capacity to deal with major humanitarian emergencies.

While Pope Benedict showed appreciation for American culture, especially for the flowering of liberty, and for U.S. Catholics, he also laid bare our temptations and failings. He spoke to young people about the “callousness of heart” that leads to “drug and substance abuse, homelessness, poverty, racism, violence and degradation—especially of girls and women.” He also warned against relativism, “which, in disregarding truth, pursues what is false and wrong,” leading to “addiction, to moral or intellectual confusion, to hurt, to a loss of self-respect, even to despair....”

This portrait is unflattering. Americans may find it hard to look in the mirror Benedict held up to us. We may want to avert our eyes. But the challenge of the visit is to learn from Pope Benedict’s criticism as well as his praise, take it to heart and find new ways to redeem the shadow side of our American character. For, as he reminded us, with our eyes fixed on the saints whose lives enable us to “soar freely along the limitless expanse of the horizon of Christian discipleship,” we too can live the Gospel life in 21st-century America.