To Sacrifice an Only Son: A reflection on three Abrahams 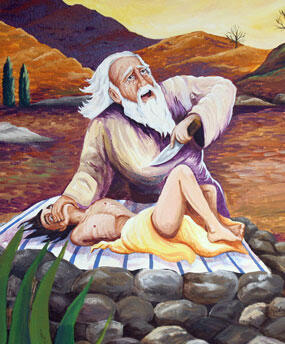 I know several Abrahams. Let me mention three, two living and one dead. Ibrahim A. works on the maintenance staff of Loyola Jesuit College on the outskirts of Abuja in Nigeria. A Jukun from Taraba state in northeastern Nigeria, Ibrahim is a Catholic, although many of his closest relatives belong to Pentecostal churches and some are Muslims. He was not himself a convert to Christianity from Islam; the grandfather after whom he was named was the first Christian in the family.

I have another friend who is also, in a sense, named Abraham, or even Ibrahim. He is Khalil K., a Lebanese Catholic and professor who works on international linkages for the Jesuits’ Université Saint-Joseph in Beirut. In the Arabic tradition—not just the Islamic tradition in Arabic—Abraham or Ibrahim means quintessentially “the friend of God”: Khalil Allah in Arabic. The town known in the Hebrew Scriptures as Hebron, the burial place of Abraham and Sarah (Genesis 23), is called in Arabic Khalil. To be named Khalil, then, is to be named after Abraham, “the friend of God,” as he is called (Is 41:8).

There are many Abrahams in this world who use the English form of the Hebrew name Avraham as their first name. For Americans, the most famous Abraham is, of course, Abraham Lincoln, perhaps the only American president about whom the judgment of history has remained consistently kind, outside the deep South.

Put to the Test

None of my three Abrahams—Ibrahim, Khalil and Honest Abe—are exact replicas of Abraham, the “friend of God,” but each of them has something in common with Abraham as portrayed in the Hebrew Scriptures, the New Testament and the Koran. The one story that all three Scriptures narrate or refer to is the story of how Avraham/Abraham/ Ibrahim was willing, at God’s command, to sacrifice his only son (Genesis 22). Strangely enough, not one of the scriptural traditions tells us what the long-suffering Sarah thought of the patriarch’s obedience, but commentary may make up for that reticence. It is a mind-boggling story. As Søren Kierkegaard reminded us in the 19th century:

God put Abraham to the test. He called to him, “Abraham!” “Ready!” he replied. Then God said: “Take your son Isaac, your only one, whom you love, and go to the land of Moriah. There you shall offer him up as a holocaust on a height that I will point out to you.”

We know how the story ends: God provides a ram as a substitute for Abraham’s only son, delivering “the friend of God” from this horror. The New Testament has no need to retell this story of Abraham’s sacrifice, because the New Testament authors regarded the Hebrew Scriptures as the word of the Lord, on which they meditated while attempting to come to terms with their experience of Jesus of Nazareth. The references in the New Testament to the story in Genesis 22, succinct as they are, are redolent of the central themes of the Christian proclamation.

In the Epistle to the Romans, Paul refers once, somewhat obliquely, to the Genesis account of Abraham’s willingness to sacrifice his only son in the context of Paul’s meditation on the meaning of Christ’s death: “He who did not spare his own Son but handed him over for us all, how will he not also give us everything else along with him?” (Rom 8:32). In the letter of James we read that “Abraham our father was justified by works when he offered his son Isaac upon the altar” (Jas 2:21). The Epistle to the Hebrews cites Abraham among the models of faith: “By faith Abraham, when put to the test, offered up Isaac, and he who had received the promises was ready to offer his only son, of whom it is said, ‘Through Isaac descendants shall bear your name.’ He reasoned that God was able to raise even from the dead, and he received Isaac back as a symbol” (Heb 11:17-19).

Note that both the Book of Genesis and the New Testament take for granted that the only son offered up by Abraham was Isaac. The Islamic tradition is not so sure of that, although the text of the Koran is not specific. Muslim Koranic commentary normally insists that the son who was to be sacrificed was Isma‘il—Ishmael in the biblical tradition. In a sense the Book of Genesis also portrays Ishmael as the victim of sacrifice, a terrible sacrifice, when he is driven with his mother, Hagar, into the desert (Gn 21: 9-21), but that is not the same as the sacrifice in the land of Moriah.

Non-Muslims will be less familiar with the Koranic narrative of the sacrifice of Abraham’s only son. I quote it here, with the caution that the Koran uses the royal “We” when God refers to himself. The Koran is very allusive and words have to be inserted parenthetically to make clear in translation to which person reference is made.

Then We gave [Ibrahim] the good tidings of a prudent boy; And when [that boy] had reached the age of running with him, [Ibrahim] said, “My son, I have seen in a dream that I must sacrifice you. Consider now: what do you think?” [The boy] said: “O my father, do what you have been commanded to do. You will find me, God willing, among the steadfast.” Then, when they both had submitted [to God], and [Ibrahim] had thrown [the boy] face down, We called on him: “O Ibrahim, you have proven faithful to the vision! It is just like this that We reward those who do good. Indeed, that was a genuine trial.” Then We ransomed [the boy] with a great victim (Koran 37:100-7).

Once a year, at the conclusion of the great Muslim pilgrimage to Mecca, the hajj, Muslims commemorate that substitution of “a great victim” for Ibrahim’s only son on the Feast of the Oblation (Id al-adha). Much could be said about the reasons why the Islamic tradition usually identifies Isma‘il as the only son who was to be sacrificed. Suffice it to say that the only time Avraham/Abraham/Ibrahim had an only son was before the birth of Isaac. Furthermore, the Book of Genesis seems to identify the descendants of Ishmael with the Bedouins of the Sinai peninsula: “Ishmael’s sons inhabited the land from Havilah to Shur, which is east of Egypt on the way to Asshur” (Gn 25:18). Muhammad and his monotheistic friends in Mecca, even before Muhammad’s experiences of revelation, seem to have regarded Ibrahim and Isma‘il as their ancestors, the original builders of the Kaaba in Mecca as a center for worshiping one God alone.

Arnold Toynbee criticized all the Abrahamic faith traditions for a certain bloody-mindedness, a fierceness surrounding stories of sacrifice very different from the traditions of Mahayana Buddhism that exalt instead a bodhisattva, whose self-sacrifice consists in willingness to put off enlightenment and stay in this world in order to draw others in that direction. Is there not a point to Toynbee’s critique?

Perhaps. But let me sketch very briefly something that I think the three faith traditions have in common when we narrate these stories of the sacrifice of an only son. All three traditions assure us that God intervened, although the way each tradition assures us of that divine intervention is different. In the Israelite tradition, God rescued Isaac and continued Abraham’s promised progeny through him. In the Christian tradition, God does not rescue Jesus from death on the cross, but the New Testament does assure us that in the aftermath of Jesus’ death God “raised him to the heights and bestowed on him the name above all names” (Phil 2:9). The Islamic tradition tells us that the ransomed only son of Ibrahim, Isma‘il, built the Kaaba with Ibrahim and began there the tradition of monotheistic worship among the Arabs, long before the era of Muhammad: “We made covenant with Ibrahim and Isma‘il: ‘Purify My House for those who will process around it and those who will meditate in it and those who will bow and prostrate [there]’” (Koran 2:125).

Back to My Abrahams

Ibrahim A. has faced many tragedies in his family, including the death a few years ago of his only sister. His sister and her unemployed husband had four sons; and when the widower remarried a few years ago, his new wife did not want those four sons in her household. Ibrahim has taken them in and feeds and educates them along with his own four children. I think of Ibrahim A. as a living saint.

Dr. Khalil K. lives, as do all Lebanese, with the struggles of the contemporary Middle East as they affect Lebanon. This “friend of God” is a friend as well to the students at Université Saint-Joseph (Shiite and Maronite, Sunni and Orthodox), who lost their support for university tuition when their homes were bombed in the Israeli incursion into southern Lebanon in summer 2006. Together with the rector of the university, Dr. Khalil K. has raised money to help them continue their education.

Of Abraham Lincoln, who can say enough? Lincoln was not much of a churchgoer. But he risked his life and finally lost his life to save the Union and to bring freedom to slaves. “As I would not be a slave,” he wrote, “so I would not be a master.” There have been few people in the history of the world, or in the history of our country, who better deserved the name “father of faith” than did Lincoln. He delivered this country from its foundational sin: he led us out of the twin horrors of being slaves or owning slaves.