A Tale of Two Elephants: Overcoming the postelection crisis in Kenya

A Tale of Two Elephants: Overcoming the postelection crisis in Kenya 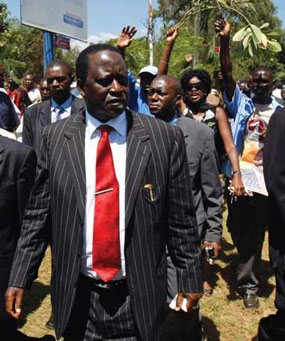 Local and international observers quote a popular saying to characterize the current postelection crisis in Kenya: “When two elephants fight, the grass suffers.” For us in Kenya this is not just a quaint figure of speech. It aptly describes the catastrophe that has rocked the country since the December 2007 presidential elections. The elections set the stage for mortal combat between two colossal personalities who bestride Kenyan politics, motivated by an unmitigated quest for power: the incumbent, Mwai Kibaki, and his archrival, Raila Odinga.

The prize at stake was the presidency. As in many other African countries, this ultimate prize comes with unimaginable powers to (mis)appropriate national economic resources, reward political cronies and frustrate rivals into submission. Sadly, neither of the two elephants has had the courage to make the ultimate sacrifice for his own political ambitions. Instead innocent Kenyans have paid the price. With vitriolic rhetoric the assorted cast of Kenyan politicians goaded masses of supporters into battle, while they, ensconced in their villas, looked on, only occasionally venturing out in heavily protected convoys of S.U.V.’s.

For weeks the Western media beamed images of horrific postelection violence to a stunned global audience. The images provoked shock and disbelief, but also a feeling of déjà vu. After all, as the lead actor in “Blood Diamond” cynically remarked in the film, “This is Africa!”

Inside Kenya ordinary citizens still wonder how this could have happened. The country is surrounded by neighbors convulsed by wars and internecine conflicts that have swelled the refugee population of Kenya and given it a reputation as an oasis of peace in a troubled region. Dec. 27, 2007, changed all that and opened the eyes of Kenyans to deep-rooted seeds of raging discontent, tribal hatred and mutual distrust. The oasis has turned out to be a mirage.

It is a commonly accepted position among Kenyans that the ongoing violence is no longer about the election. Whether one considers the elections a trigger factor, an excuse or a subterfuge, the violence we have seen over the past weeks bears signs of a carefully premeditated and organized operation. Some of it may have been sporadic and some opportunistic. Underneath it all lies a murderous quest to avenge old wrongs, settle atavistic scores and eliminate ethnic rivals and enemies.

Unquestionably, in all parts of the country, the result has been the same: death and destruction, impunity and disregard for fundamental human rights. I know a mother of 12 children who eked out a living selling a few assorted candies and cigarettes in a makeshift kiosk less than a block from our school grounds. Over the years she survived several evictions and harassment by city council officials. As I write, she sleeps in the open in an agricultural showground with her entire family. She has lost her home and her livelihood; she now depends on the goodwill of humanitarian volunteers.

When violence erupted in a nearby slum, the choir director of our local parish ran for her life, not knowing who was pursuing her or why. Unfortunately she ran into a mob of riotous youths, who did not spare her. They hacked her to death.

Our cook’s eldest son saw his ramshackle room razed to the ground by a gang of youths. He was lucky to escape alive.

Every day we hear horror stories of how the postelection crisis continues to destroy innocent lives. Many of the victims voted with pride on Dec. 27. Whichever elephant they voted for, they did so with conviction and high hopes for a change in their living conditions. One of my students stood in line for seven hours to cast his ballot; many traveled hundreds of miles to their home areas to exercise their civic right. It was a heartening sight to behold millions of Kenyans braving the elements to make sure every eligible votor participated.

The results, however, betrayed all expectations. The disputed vote count sparked unprecedented mayhem, chaos and violence. Any talk of an election rerun, which some political leaders have proposed, is now met with a scornful, “God forbid! Never again!” This morbid fear of elections is understandable. As one victim put it, “We voted and we lost!”

Several weeks after the elections, the death toll continues to rise. Over 1,000 Kenyans have died, though government figures claim the number is smaller. Countless others lie injured in hospitals across the country, nursing wounds inflicted by machetes, poisoned arrows, clubs and gasoline bombs. Almost overnight, Kenya has generated 300,000 internally displaced persons and refugees. Forced off land they once called home, these people, mostly women and children, sleep in open spaces: stadiums, police stations, showgrounds and church compounds.

Neither the two elephants nor their cheerleaders know the indignities of forced displacement. It would seem that Kenya has finally joined the league of African countries whose tortuous quest for socioeconomic development remains bedeviled by senseless violence and political shortsightedness.

During a recent panel discussion analyzing the postelection crisis, one speaker suggested that Kenya’s was only the latest in a wave of conflicts sweeping across Africa. This wave has tossed and overturned Zimbabwe, Congo, southern Sudan, Darfur, Somalia, Ethiopia, Eritrea and northern Uganda. No one quite knows when, where or how this raging tide of violent conflict will subside. In Kenya and elsewhere, the consequences have proved devastating for a continent perpetually struggling to climb out of a debilitating downward spiral of poverty, hunger, disease and underdevelopment. When people see images of violence in one African country, they see all of Africa. Not many are informed enough to distinguish between the continent as a whole and the individual countries.

The present crisis has far-reaching consequences for Africa. Here again the saying about two fighting elephants holds true: the fighting in Kenya hurts all of Africa. The events of recent weeks have demonstrated how much Africa stands to lose from this crisis. The economies of neighboring countries, like Uganda, Rwanda, Burundi, Tanzania, southern Sudan and Congo, face serious challenges as a result of the postelection crisis. Besides, the tourist industry, which is Kenya’s economic mainstay, is tottering on the brink, because many Western countries have advised their citizens to steer clear of Kenya. Local hotels are operating below capacity. Another important foreign exchange earner, the exportation of cut tropical flowers, faces an uncertain future, because most of the industry operates in the combustible Rift Valley region. Thousands of jobs have been lost, compounding an already precarious situation of unemployment.

What is the way forward? That is the question on the lips of many Kenyans. “If you don’t know where you are going, you should at least know where you are coming from,” says an African proverb. The efforts at mediation have identified the need to redress historical injustices as part of the total peace package. This is a tall order for a country where self-seeking political operators have consistently swept the contentious issues of land tenure, ethnic bigotry, constitutional reforms, human rights abuse, corruption and economic misappropriation under the carpet for many decades since independence. As some have argued, this is perhaps an opportune moment to revisit these burning questions. But for this process to commence, a bold, credible and people-centered political leadership remains an absolute prerequisite. The political arena, however, is overpopulated by charlatans and megalomaniacs who have lost the confidence of ordinary Kenyans.

The disillusionment of Kenyans with the political class has revived the debate over the role of religion in society. First, churches have served as places of refuge for thousands of victims. And yet during the early days of conflict, the most horrific act of barbarity was committed inside a church, where scores of innocent Kenyans were burned to death as they huddled together for safety and comfort. Second, churches have served as gathering places for Kenyans seeking divine intervention. Millions continue to throng to places of worship to pray for peace so they can return to the land. Third, a turn to religion for solace and relief has highlighted the critical role of religious leaders. Many have issued passionate appeals for peace and volunteered their services as mediators and facilitators.

The complexity of the present crisis, though, reveals the precarious role of religion and religious leaders in Africa’s politics. So emotionally powerful and polarizing are the issues that a perception of one’s neutrality, even as a religious leader, is not guaranteed. A few high-profile religious leaders have been discredited on account of their perceived political biases—a charge leveled against them by their own ethnically divided congregations. The ability of religious leaders to establish themselves as viable alternative agents and facilitators of peace in a time of crisis remains limited. This crisis proves that the church in Africa still lacks an effective mechanism of sociopolitical engagement. Even more unsettling is the fact that the vocabulary of Christian social ethics has become suspect. The following is an example.

As part of the myriad responses to the postelection crisis in Kenya, Hekima College launched a Lenten Peace Campaign. It was a simple initiative: to print and distribute postcards of St. Francis of Assisi’s prayer for peace, just as Cardinal Francis Spellman of New York did during World War II. We planned to set up a booth at our school gate, as we have done for the school’s Lenten campaign in past years, distributing peace postcards to passersby and urging them to take the words of the prayer to heart. Sadly, we were urged to revise our plans and adopt a more cautious and discreet approach. Under the present circumstances, the logic of political polarization in Kenya means that protagonists use words like “peace” and “justice” to represent their mutually exclusive claims to political power: if you advocate “peace,” then you are for the incumbent and the status quo; if you call for “justice,” then you stand on the side of the opposition leader and support his cause. Either way, one is bound to draw the ire of one of the two elephants and their herds of arsonists, looters and murderers.

Kenyans and the rest of Africa pin much hope on the ongoing mediation process led by the former secretary general of the United Nations, Kofi Annan. This skilled diplomat and negotiator achieved a remarkable feat by bringing the two elephants together: Kibaki and Odinga shook hands in public and were seen on national television sharing a cup of tea. But even that gesture did not seem to quell the violence; they had already ignited a fight in which ordinary Kenyans turned against one another out of frustration and desperation. As things stand, sincere mediation and frank dialogue represent Kenya’s best chance for long-lasting solutions to perennial socioeconomic and political injustices.

Eventually, out of political expediency, the two elephants will reach a compromise and agree on a power-sharing deal. Each one will have gotten what he wanted at the expense of hundreds of slain victims and thousands of internally displaced persons and refugees. Long after Kibaki and Odinga have made their peace with each other and achieved their political ambitions, Kenyans will continue to reel with pain and seethe with anger, traumatized by the fact that they voted for and lost out to selfish politicians. We face a long road to peace and reconciliation with truth and justice.

This article also appeared in print, under the headline “A Tale of Two Elephants,” in the March 10, 2008, issue.