The Witness of Courage and Forgiveness

The Witness of Courage and Forgiveness 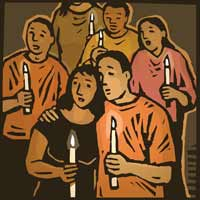 Preparations for the 10th Annual Service for Families and Friends of Murder Victims last October turned out to be both fatiguing and exhilarating. Members of the Cherish Life Circle, which sponsored the service, know what it is like for mourners to come, some year after year and others for the first time. They bring hearts broken but also grateful to a gathering that provides understanding and comfort. Many first learn of the gatherings through Safe Horizon, a private, nonprofit organization that offers a broad scope of services to crime victims in New York City.

The naked suffering of the survivors produces weariness in those who plan the event, extend the welcome and provide the service. Gratitude comes from owning the privilege of comforting these profoundly afflicted victims of violence.

The procedures are pretty well in place now, although three years ago we almost forgot the candles for the candlelight service. After each year’s gathering, we evaluate the service in the hope of improving it the next year. We have learned to insist that attendees preregister with Safe Horizon; we have recognized the value of speakers who have themselves lost a loved one through murder; we have decided to use a Spanish interpreter and to set out juice cups for the children. Over time we have moved from parish churches to a 150-year-old convent of the Sisters of Mercy, where it is easier to control the environment.

The original incentive for the annual service came from a news segment shown on CBS’s “Sunday Morning” a dozen years ago, when the late Charles Kuralt was the program’s host. The Rev. Michael Doyle, pastor of Sacred Heart Church in Camden, N.J., was a featured speaker. Situated in a devastated section of Camden, the parish is a center of strong pastoral leadership that reaches out to the area’s abandoned poor. Father Doyle described an Advent Mass that included some two dozen participants who were mourning murdered loved ones. Over their hearts they wore the names of the dead, whose memory he invoked from the altar. Amid candles and hymns, a deep sense of reverence for the dead filled the church.

The Cherish Life Circle adopted some of Father Doyle’s symbols and procedures, but decided not to celebrate Mass, since most of our attendees are not Catholic. We held our first service on March 16, 1997, in Brooklyn’s majestic Queen of All Saints Church.

If Father Doyle had provided our original inspiration, a 10-year-old boy in brown shoes who attended that first service sealed our commitment. He raced up the steps just minutes before the service started, dressed in suit and tie, and without the sneakers kids usually wear.

“Son, what are you doing here?” I asked.

“Do you know what this is?” I pressed.

“Was someone in your family murdered?”

I added his brother’s name to the list, made out a name card for the child to wear and put him in a pew with mothers. When his brother’s name was called, he rose, stepped into the aisle and squared his shoulders, which then crumpled as he broke down sobbing. Mothers quickly rose from the pews, embraced him and led him to the others in the sanctuary.

When the service ended, I searched for the child, but he was nowhere to be found—not in the gathering space, not on the sidewalk. I had no address and knew only that he had taken two subway trains to reach this unfamiliar place of worship. The boy in the brown shoes lives on as a kind of guardian angel of the group. He had come upon a peaceful place of compassionate welcome and prayer, an important experience for a child wounded by violence.

How Real Is the Need

A few years later a stunning, well-dressed white woman arrived with her 24-year-old son for a service in Our Lady of Refuge Church. Within minutes, she showed me a photo of her older son, handsome in a tuxedo; he had been murdered six months earlier. She was distraught. Eventually she and her son took their seats, and I turned to greet an equally stunning African-American woman, who showed me a photo of her 20-something son, handsome in his tuxedo. He, too, had been murdered a few months earlier. “Please come with me,” I said; “there’s someone who knows what you’re going through.”

Another year, we met a gentleman who stood stoically during the social gathering that precedes the annual service. His wife sat expressionless with a pre-adolescent boy beside her. “The man who killed my son killed my whole family,” the man said. The older of his sons had been shot to death on a Brooklyn street five years earlier. Determined to track down the killer, he scoured the neighborhood night after night. As weeks went by, his younger son set out on his own to find the culprit. One night he didn’t come home. He remains missing.

One day a woman with a young boy appeared at the man’s door. Not knowing any better, she asked for the murdered son. She had come from the South with the child the dead man had secretly fathered. Instead of welcoming the woman and his newly discovered grandson, the grief-stricken man sent them both away. A few months later, though, the child returned with a stranger; the boy’s mother had been murdered on a Brooklyn street. It was this young boy who now sat behind his grandmother, the man’s wife.

“The man who killed my son killed my whole family,” he repeated. “We don’t celebrate anything—not Christmas, not birthdays, nothing.”

“What about this young boy?” the greeter asked.

The speaker that day described Jesus’ instruction to roll away the stone entombing Lazarus. She spoke of the importance of removing from our hearts stones that impede the flow of love to the living. Later, the man, who thought he had lost his whole family, said he’d understood those words and was ready for help. We introduced him to a Safe Horizon counselor.

In September 2007 the Office of Prison Ministry in the Diocese of Rockville Centre, N.Y., invited representatives of the Cherish Life Circle to help them start a similar service on Long Island. So did the Prisoner and Victim Empowerment Committee of St. Gabriel’s Parish in the Bronx. Both groups share the Cherish Life Circle’s concern for incarcerated people. All agree on the need for outreach to relatives and friends of murder victims.

Our experience has persuaded us that victims of violence have a need, sometimes not recognized, for the blessing of peace that such services can bring. In return, their gift to us has been the witness of their courage and forgiveness. Asked what should be done to her daughter’s killer, a woman replied, “He should be punished, but not killed. I would never want another mother to undergo the sorrow I have known.”

This article also appeared in print, under the headline “The Witness of Courage and Forgiveness,” in the February 11, 2008, issue.

Camille D’Arienzo, R.S.M., is the founder of the Cherish Life Circle.