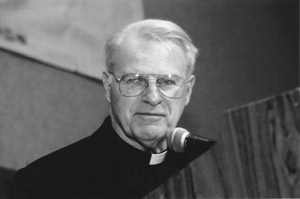 Last November, leaders in Bostons labor-management community gathered for the annual Cushing-Gavin Awards dinner. The neutral award went to Edward Boyle, S.J., a priest who for the past 37 years served as executive secretary of the archdioceses 1,200-member Labor Guild. Boyle died of cancer on Nov. 13 at the age of 76, just two weeks before the dinner. The award, which honors his service, will hereafter bear his name.

Cardinal Richard Cushing created the Labor Guild in 1946 to educate Catholic workers about their rights and responsibilities. Today it operates a school of industrial relations that offers such courses as labor law, collective bargaining, steward training, union governance and parliamentary procedure. The guild provides an important venue for collective bargaining, arbitration and union elections. Under Boyles leadership, it became a moral voice for labor-management relations, providing opportunities for the leaders to build close personal relationships and explore ways to work on shared problems.

Boyle was one of the last in a long tradition of Jesuit labor priests, just as the Labor Guild is the only institution of its kind left in the nation. To the end of his life, Boyle argued with conviction that the Guild is needed more today than ever. In his last Mass, televised on the Sunday before Labor Day, he said: The labor market climate in almost all sectors continues to deteriorate; the gap between worker and manager, between rich and poor, threatens the very moral foundation of our society. Boyle explained that our economic system has lost its moral compass and needs to be redirected to serve the interests of all, not just those at the top of the economic ladder. The only valid opposition, he said, must be a moral one grounded in God and Gods will.

In his final months, Boyle led the board in developing a new vision of the Guilds role, grounded in the best Catholic social teachings and updated to reflect the critical problems facing workers, employers and the economy today. It calls for greater efforts on behalf of immigrants and other low-wage workers; extended use of media to broadcast the moral issues at stake in debates over worker rights and the responsibilities of unions, management and government; and engaging people of all faiths and traditions in efforts to achieve workplace justice, harmony and efficiency.

Edward Boyle took an unusual path to the priesthood. He attended public schools in Belmont, Mass., went to Dartmouth College on an R.O.T.C. scholarship and received a degree in economics. He served as a U.S. naval officer for three years, pursued an M.B.A. and worked in finance with Seatrain Lines in New York City. He said it did not take him long to realize something was missing: I was going down the wrong path at 100 miles an hour, pursuing a life in which money and winning are everything. After attending several retreats conducted by Jesuits, he entered the Jesuit novitiate in 1958. Boyle appreciated being exposed to a whole new world of the lives of the saints; he encountered the pioneering social justice work of several diocesan priestsMsgr. John A. Ryan, Msgr. George G. Higgins and Msgr. John J. Eganand the Jesuits Philip A. Carey, Leo C. Brown and Philip S. Land. Dorothy Day and the Catholic Worker movement inspired him.

While studying philosophy and theology at the Jesuit seminary in Weston, Mass., Boyle met Mortimer H. Gavin, S.J., a chaplain to the Labor Guild from 1961 to 1984. Boyle offered to help. Following his ordination in 1969 and a year of teaching high school, Boyle started his own ministry at the Guild, attracted to its mission: to promote the dignity of the individual person/worker as the cornerstone of a just economic system through democratic trade unionism and collective bargaining.

Greg Thornton, senior vice president for employee relations and operations of The Boston Globe, says of Boyle: Father Ed encouraged collective bargaining among guild labor and management members to be conducted in a dignified and civil environment that has often been lost or absent in other parts of the country. His example and standards will be sorely missed.

In one of his last conversations, Father Ed said: I have three families: my flesh and blood family; my Jesuit religious community and the Guild family. All three mourn the loss and celebrate the life of this holy, humble and remarkable man. Boyles work will continue; he would have it no other way.