Byzantium,Texas: 'No Country for Old Men' 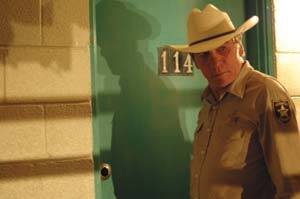 As a title, No Country for Old Men boasts a noble ancestry. It traces its roots through the novel by Cormac McCarthy to the opening line of William Butler Yeats’s poem “Sailing to Byzantium.” In the poem Yeats yearns to leave the ephemeral world of “whatever is begotten, born and dies” for Byzantium, a land of art, imagination and consequently immortality. By keeping McCarthy’s title for their mesmerizing new film adapted from his work, Joel and Ethan Coen signal that they have striven to reach beyond the American naturalism that characterizes Hollywood movies and create something “of hammered gold and gold enameling.” They’ve transformed the narrative style of American genre films into a poetic and philosophic reflection on time and eternity, on myth and reality, on morality and pure, undiluted evil.

A useful comparison comes to mind. Quentin Tarentino attempted similar reflections in his two “Kill Bill” movies. With his own encyclopedic knowledge of American film history, he relied on the genres he most admired: science fiction, martial arts and the tradition of comic book superheroes. As a result, the story lifted its audience into a realm of obvious fantasy. The films were playful and never pretended to be “real,” even though the ideas they probed were deadly serious. The Coens draw upon other traditions: the detective story, the western, the police procedural and the gangster saga, each of which relies on the illusion of plausibility for its effectiveness. The result for the Coens is myth posing under an easily permeable veneer of reality.

In their current film, the Coens lead us through the desert of the Texas border country. This is not the vast ennobling desert of John Ford’s Monument Valley that our heroic ancestors crossed as they built a nation. This is a land of scorpions, rattlers and flies. An inept hunter misses his shot and a wounded animal hobbles off with the herd leaving a trail of blood in the sand. In John Ford’s films John Wayne never missed, and fallen animals never bled. In this Coen film, the land is traversed not by noble stallions but by battered pickup trucks, a secluded borderland suitable for clandestine drug deals. And if the deal goes sour, it is a place where the swollen corpses of men and their pit bulls will remain undetected for days, or weeks, or forever.

A mythic story may be set in time, but in fact it transcends time. The Coens set their film in the dusty towns of south Texas sometime in the 1980s. In an opening voice-over narrative, Sheriff Bell (Tommy Lee Jones), a third-generation police officer, looks back to the old days, when many of his predecessors, like his grandfather, never wore a gun. This seemingly random observation cuts the boots out from under the western myth that the “wild west” was tamed by the settlers. According to a conventional reading of American history, these larger-than-life men used their six-shooters to create a Garden of Eden out of the howling wilderness and set the nation on its irreversible trajectory of progress. It’s not so. Old-time outlaws never conducted multimillion-dollar drug deals outside town and for some unexplained reason killed all the witnesses with automatic weapons. Today no officer would ever think of appearing on duty without his gun. In a conversation with Sheriff Bell, one old-timer laments an end to sanity and order that started when young people began to feel free to walk the streets of his small town in Texas with green hair and “bones in their noses.”

Like myth itself, evil knows no boundaries of time. As the years have passed, Sheriff Bell has grown tired in his work. A calm and competent professional, he has learned well from his experience. He knows the limits of his power. While younger officers urge rushing off in pursuit of their adversary, he imposes restraint until they can devise more realistic plans that offer some prospect of success. He has clearly surrendered the illusion that he can impose order on the frontier. He is satisfied to arrest one criminal at a time, even though he knows another one will appear tomorrow. The grind has sapped his strength. He walks slowly and speaks deliberately. His close-fitting uniform shirt shows the bulge of a middle-aged physique.

Evil, in its timeless form, appears in the person of Anton Chigurh (Javier Bardem). Although the film is set in the 1980s, he wears a helmet of hair that might have been fashionable among rock stars 20 years earlier. His name and the trace of an accent in his voice leave his origin in doubt, since evil has no geographic or ethnic identity. He first appears in handcuffs, being led into a police cruiser by a young, inexperienced deputy, who proves no match for his prisoner. What brought about his arrest? It makes no difference. He begins his rampage of murder carrying a tank that may be oxygen for asthma, or a welder’s torch to torment his victims, or something else. The menace that radiates from his huge frame makes everything he touches an instrument of death, even something that might be a medical device to sustain him if he has a lung condition.

Unlike many zombie-like incarnations of evil, Chigurh speaks freely, even though he uses language not to communicate, but to intimidate. In a beautifully scripted scene, he challenges the owner of a convenience store to toss a coin, but he will not reveal the stakes. He leaves little doubt that he will not hesitate to kill the man whether he chooses heads or tails. The elderly man senses the crisis, but he can do nothing to stop the relentless force of evil embodied in his customer. His life or death is a matter of pure caprice.

Capricious violence threatens the human characters, just as it did the life of the antelope wounded in an opening scene. Chigurh kills because it is his nature to kill. Remorse plays no more role in his life than it does in the conscience of the inept hunter. One merely accepts a violent world because nothing can neutralize this force of impersonal, unfocused violence. His victims, whether implicated in crime or resolutely innocent, remind him that he will gain nothing by their deaths. He agrees. They reason with him; they plead for their lives. Then he pulls the trigger.

Llewelyn Moss (Josh Brolin) thinks he can outwit Chigurh and survive, but he might as well try to outwit a tsunami. He thinks he can build a new life with the money he discovers among the dead in the desert. As a Vietnam veteran he has his own history of violence, but now he has a wife, Carla Jean (Kelly Macdonald), and the semblance of a human existence with her in a trailer park. The match is uneven. Chigurh is not a human person but an abstraction. Bullets cannot kill him. Broken bones cannot divert him from his predetermined path. Police work cannot apprehend him or deter him. He is simply a remorseless part of the human condition. Sheriff Moss, pondering retirement one more time, seeks understanding of Chigurh and his own life by recounting his dreams to his wife, Loretta (Tess Harper). The destructive monster one faces is not necessarily the objectifiable other but the force that lurks deep within the subconscious of every human being.

“No Country for Old Men” borders on perfection in technique. The sparse soundtrack, almost devoid of music, captures the delight and menace in natural sounds: traffic, labored breathing, footsteps in a darkened hallway, wind in the desert. The skies over the desert press down over the characters as though the vast landscape of Texas can provide no hiding place from the monster that dwells within. Neither the glorious colors of sunset nor the bleaching light of noonday can mask the horror.

The film casts its shadow far beyond Texas. It penetrates into the heart of the human condition in its universal manifestations, as Yeats would have it, “what is past, or passing, or to come.”

Richard A. BlakeRichard A. Blake, S.J., is professor of fine arts and co-director of the film studies program at Boston College in Chestnut Hill, Mass.
Show Comments (
3
)
Comments are automatically closed two weeks after an article's initial publication. See our comments policy for more.
edward ayres
15 years ago
Three men in the film with three codes of behavior.The first scene, the hunter,knows a la Hemingway if you set out to kill an animal and only wound it you must take on the danger or at least the inconvenience of putting it out of its misery.The hunter walks into an unknown danger greater than anything Hemingway encountered in the African Savanna.The sheriff,a good old boy, eschews the "action first"approach and believes in think first and then take it slow and easy, Gary Cooper style. The killer believes in keeping his word and its quits for you if you don't keep yours.He also allows for chance to determine a persons (the other person's) fate.In the end he has enough humanity to bend rule number one to allow rule number two,chance,to determine a woman's future.Mix it all together and you got yourself a film. The author,Cormac Mc Carthy,is not an easy guy to live with.If you have any popcorn left its best to sprinkle a little gratitude on it for your own good life,as you walk out of the multiplex. In terms of evil and "the film casting its shadow beyond Texas",think of The Evil Empire and The Axis of Evil and the words of Josephus ,the Hebrew historian,who said of the Peace of Rome "they create desolation and call it peace." Give us a Gary Cooper sheriff who may have his finger on the trigger but who is also prepared to take it "slow and easy."
James Ruzicka
15 years ago
This is just one more test.
14 years 8 months ago
Even the two youngsters at the end of the film were not innocent. One took the money offered for his shirt, as if compassion didn't count. The offer of money ruled out everything else. And he refused to share what seemed to him to be a considerable amount. It became so important that the driver and or passengers in the other car didnt even get a look. They didn't exist for the kids. And the Evil One walks away to kill again and again. As if evil has no end.