His Dark Materials, Indeed: Is 'The Golden Compass' anti-Catholic? 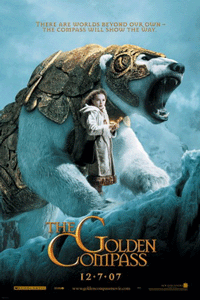 A long time ago in a fantasy land far away from here, there lived a young man who was a graduate student in Classical Philosophy. He and his many postmodernist colleagues were full of nostalgia for the past and contempt for the present, and loved to reminisce about the literature of their childhood. One day the subject turned to C.S. Lewiss The Chronicles of Narnia. Oh, I loved those books so muchthey were like entering a whole different world! gushed the most enlightened and post-Christian sage of the graduate student lounge, but then her face suddenly clouded. Until I got older, she added, and realized it was about all that.

All that, of course, was the Christianity to which Lewis drew countless (and often rather obvious) allusions in his six-book fantasy series. What my erstwhile partner in cynicism had loved about the books were the sorcerers and witches and toast with jam and talking beavers and fantastical kingdoms ruled over by bookish children that populated their pages; only as an adult did she notice Aslan talked and acted an awful lot like Jesus. This discovery had, as we liked to say in those days, problematized her hermeneutic with respect to the text.

The release of "The Golden Compass" this past month has introduced a new problem of hermeneutics into the public sphere, because the novel on which "The Golden Compass" is based starts from a radically different point of view from that of Lewis, or Tolkien, or even J.K. Rowling. Philip Pullman, we are told, wants to kill God; while hes at it, he wants to destroy organized religion as well. In both his fiction and his public comments over the years, Pullman has drawn an almost Manichean distinction between the naiveté and corruption-by-power of adherents to religious creeds on the one hand, and the heroism and dignity of atheists on the other.

The ultimate goal of his heroes in the His Dark Materials trilogy, of which the The Golden Compass is the first novel, is to forsake the notion of an otherworldly Kingdom of Heaven and create instead a Republic of Heaven among the living. In the novels, this fantasy Republic of the future sounds suspiciously like Sweden but with talking bears, or Venezuela without oil.

Pullman has sold millions of copies of His Dark Materials trilogy by creating an imaginary world where the heroes of Lewiss and Tolkiens fantasy worlds might be considered the enemy of his child protagonists. In The Golden Compass and its sequels, an evil Magisterium seeks to brainwash rebellious children and separate them from their souls, all while propping up a false religion and seeking to frustrate the advances of science and of self-understanding. In other words, the exciting elements are still the sorcerers and witches and toast with jam, but the real action comes with the quest to overthrow God.

It sounds disgusting, on the face of itrank propaganda for the cause of militant atheism, coated with sugar so the kids will swallow it all the more easily. And viewers should make no mistake: in the book on which this film is based, Pullman makes no bones about who are the heroes and villains in the world, and the latter include obvious parallels to organized religion, Christianity, and the Roman Catholic Church in both organization and character. Many Christians and Catholics have railed against both Pullmans novels and the new film, including Bill Donohue of the Catholic League for Religious and Civil Rights and, more recently, Archbishop Charles Chaput of the Archdiocese of Denver.

Pullman and the films backers have claimed that the film has been significantly bowdlerized with the intention of removing any anti-religious elements. While significant changes have been made (the movie departs from the book in its lack of theological discussion or historical background for the Magisterium), "The Golden Compass" still includes a number of patently obvious references to a church whose leaders are out to keep the world under theocratic rule. In this sense, Pullmans soothing words that the theology has been left out are simply untrue.

Should Christians boycott this film as a result? To a degree, they already are, as the movies per-screen earnings collapsed after its first week, making the prospect of two sequels a financially dicey proposition for the studios. However, I suspect the lack of an audience for "The Golden Compass" was not due to calls for a boycott or outrage on the part of Catholics. Rather, it seems more likely that moviegoers stayed away because it is not a very good film.

Never mind the overly complicated plot, set up with endless exposition but little clear presentation of the motivations of the various characters and groups depicted. One might also dismiss the gloomy special effects and scenery choices, both of which included an excess of snow and ice. Ultimately "The Golden Compass" problems center around two much more important elements: the acting and the dialogue.

Simply put, not a single character in this film beyond the young heroine Lyra Belacqua (played by Dakota Blue Richards with a passable degree of adolescent snarl) was particularly believable, and some, such as the aforementioned priests of the Magisterium, were comical in their mawkish attempts to appear evil. Similarly, Nicole Kidman, who played the evil Mrs. Coulter (I assume her first name was Ann), acted her role as if the directors primary suggestion was that she show no range of emotion at all: an ice queen in affect as well as in role. The script is similarly awkward, particularly when any of the supposed heroes of the film deliver what is intended as a rousing speech. The original script for "The Golden Compass" was by renowned wordsmith Tom Stoppard, but director Chris Weitz replaced his screenplay in favor of Weitzs own adaptation of the Pullman novel. It is tempting to imagine Stoppards efforts would have been a significant improvement.

There are some strengths among these weaknesses, of course: the story does convey well a childs sense that the everyday world is hiding a more exciting and exotic reality, and Weitz by and large captures those elements of Pullmans novel that made it a best-seller, including some wonderfully anthropomorphized creatures as well as a real sense of menace. A central conceit of Pullmans story is that in the alternate universe in which these books (and film) are set, each individuals soul is embodied in an animal which accompanies its human at all times, and these talking beasts are cleverly and believably done. Audiences beyond children and fantasy aficionados will find moments to enjoy.

But what of the earlier question: is "The Golden Compass" an appropriate film for Christians? Should parents take their children to see it, knowing it may spark their interest in reading the books? But of coursewe should not fear books or underestimate our children. Parents should be happy if their children want to read them. The potential harm is far outweighed by the definite good achieved by getting kids to read in general. Anti-Catholic fiction in this country has been around for as long as the United States has existedthink of the lurid escaped from the convent potboilers of another centuryand the church has survived and flourished.

Both The Chronicles of Narnia series and The Lord of the Rings trilogy had explicitly pro-Christian themes, and one could easily find many of those themes still present in their cinematic adaptations. Those films, particularly the LOTR series, sold hundreds of millions of tickets, and exposed a significant portion of the worlds population to the artistic preoccupations of their deeply Christian creators. So why should Catholics generously support those films but then blow a rhetorical gasket when a fantasy series instead makes our religious institutions out to be the bureaucratic home of cartoonish supervillains? We are perhaps better served by demonstrating our faith is not damaged by what is ultimately little more than bad art.

I think back to my fellow graduate student from a decade ago, and realize that despite our different opinions on almost all matters religious, we would still agree on this much: authorial intent need not be the only lens through which one judges or appreciates literature or art. If children fall in love with The Golden Compass, so be it. If they ask for the books for Christmas, perhaps they should be allowed to read them. Also buy The Chronicles of Narnia, or The Lord of the Rings trilogy. But we should not be surprised if the wholesome influence of those latter books fails to turn our children into God-fearing Christians. Children mostly want the wizards and the talking bears and for the kids to be made kings.