A Man for Our Season: Michael Clayton, one man's ethical wasteland 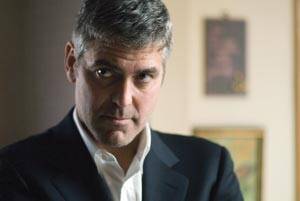 We need not go back as far as Thomas More, even the saint as updated in Robert Bolt’s film, to find moral heroes in cinema. Through the movies of an earlier age we saw Jimmy Stewart, Henry Fonda and even Gary Cooper portray plain-speaking men who faced down the “big shots” with simple homespun certainties. They were country boys, but they knew right from wrong, and no fancy talk from city slickers could change their minds. These men rose from the plains and cornfields to seize the moral high ground and defend it as their personal Masada. They were Thomas Mores in overalls.

What a difference a few decades have made. Over the past seven years, the folksy language of Frank Capra’s America has been co-opted to mask unspeakable atrocities. In a complicated world of competing ideologies, plain speaking and unshakable certainties have led to a corruption of values rather than ethical clarity. Ends no longer merely justify means; now dubious ends dictate repugnant means. Torture has entered the vocabulary as a less reprehensible concept than welfare. Robbed of both innocence and decency, we no longer wonder who has seized the moral high ground, but whether a moral high ground exists anywhere.

Michael Clayton offers an illuminating tour of one man’s contemporary ethical wasteland. The eponymous hero, played with baggy-eyed brilliance by George Clooney, has prospered as a lawyer and leading citizen of this barren landscape. He is a man for our season, and in his weariness he embodies exhaustion, not malice. His marriage has ended, but he remains devoted to his dying father and eight-year-old son. One of his brothers has followed the family tradition of joining the police force; the other has surrendered his life to drugs. Clayton drives a leased Mercedes and wears impeccable Brooks Brothers suits, but his losses at high-stakes poker in Chinatown and an investment in a failed restaurant have kept him from putting away much money. Unlike his colleagues, he has no Harvard, Columbia or Wharton degree; he’s one of us, the son of a cop. Clayton graduated first from St. John’s University in Queens, then from Fordham Law School, but Catholic teaching has left little mark on him. He made the best of his opportunities in the district attorney’s office, then in the corporate world. His morality is not ambiguous as much as simply non-existent.

At the firm of Kenner Bach, Michael Clayton functions as an invaluable member of the team, but he will always be an outsider—never a partner—and he knows it. He is valued as a “fixer,” or as he puts it a “janitor” who cleans up other people’s messes. With the ease of “fixing” a parking ticket, he has the contacts to get the firm’s clients out of embarrassing situations. His powerbase is his Rolodex and telephone; he never appears in court. Other lawyers regard him as a piece of expensive office furniture, yet they rely on Clayton to deal with congressional investigators or curious reporters from The Wall Street Journal.

The script, by first-time director Tony Gilroy, demands patience and attention before the pieces of the non-linear narrative fall into place. A bizarre, off-screen monologue recounts a dream about being caught in the middle of a busy avenue with traffic hurtling toward the speaker, who cannot escape because he is covered with a mysterious slime. Later the voice is connected to Arthur Edens (Tom Wilkinson), a partner who has suffered a psychotic collapse while representing a corporate client at a discovery hearing in Milwaukee. Clayton will take care of it; he routinely handles such matters. He flies to Milwaukee to get Edens out of jail and back on his medications and assures the client that the episode has not damaged its case.

Karen Crowder (Tilda Swinton) stands in front of a mirror rehearsing a speech, which seems at first to be preparation for a job interview. She stands in front of her dressing table, as the camera pointedly reveals a body that is far from starlet perfect. Her impeccable wardrobe covers her personal insecurities and moral blemishes, as well as the belt of surplus flesh that stubbornly resists her regular gym workouts. Before long, she is identified not as a job applicant, but as chief corporate counsel for U/North, a company that produces fertilizer. She will be working with Kenner Bach, which has been handling a case for U/North for eight years and profiting quite nicely from the relationship. The company has been relying on a slick public relations campaign and legal tap dancing, choreographed by Kenner’s shrewdest litigator, Arthur Edens, to work its way out of a multibillion-dollar class-action lawsuit for distributing a carcinogenic weed killer.

Tony Gilroy’s script avoids the easy clichés of eco-terrorism waged by greedy stockholders against a defenseless population. Michael Clayton is no Erin Brockovich in wingtips. If David does face Goliath, Clayton will side with Goliath, since he is paid to help his firm defend its clients regardless of their guilt or innocence. Besides, Clayton needs the money badly. His debts are held by shady characters who warn of ominous consequences if he cannot produce $75,000 within the week. He does nothing outside the law, but the margins of lawfulness seem especially porous at times.

As Clayton, George Clooney gropes toward morality, but doesn’t really want to find it; he is resourceful, but confused. Mastering his role, Clooney makes us sympathize with Clayton for his hard choices, rather than despise him for his venality.

His two co-leads are equally dazzling. Arthur Edens has gone mad after eight years of defending what he has come to believe is indefensible. Tom Wilkinson lets his character rave in his sickness, but never for a moment does he allow us to forget Edens’s intelligence. He’s too skillful for his own good. His success in defending U/North becomes unbearable to him. His colleague, or accomplice, Karen Crowder has risen through the all-male ranks of corporate lawyers because she excels at what she does. Despite her success, however, she is a bundle of insecurities, even though she knows she will be the smartest, most powerful person in the room. She continually tugs at her power suit to make sure it masks those inconvenient bulges, since she feels this is what her male colleagues will see in her. She can be ruthless, but Swinton’s acting makes us sympathize with her. After all, Crowder has a point to prove: as a female she cannot display any weakness, even when she is being pressured into doing something horrible. When her lip quivers for an instant and she looks down, we know she is being torn apart by her decisions, not so much for their depravity as for her own uncertainty about their consequences.

While the lawyer Michael Clayton stands at the center of this psychological drama, he is actually a symptom, perhaps even a victim, of the world he inhabits. Clayton lacks a moral compass because here there is no true magnetic north, except of course U/North, the corporate giant that directs all the characters. But it is, in the end, a fertilizer company. Arthur Edens goes mad with his realization of the absurdity of it all. Or perhaps Edens is the sane one, with the rest of the universe gone mad around him. We wonder if Clayton will follow the path Crowder took and prosper in the morass. Or will he reject the lunacy of the situation and find his own way to drop out, as Arthur Edens has done? In the film’s final sequence, we still have no clear indication of Clayton’s future.

Although the film bases its claim to excellence on an extremely literate script, two wordless scenes reveal Clayton’s inner struggle in a particularly poignant way. In one scene, he sits at a table in his failed restaurant looking at a soggy paper cup of coffee in front of him, as an auctioneer sells off the kitchen utensils—how fleeting is success. In another, he parks his Mercedes on the side of a country road and walks quietly to a hilltop where three horses gaze at a sunrise. He has a moment of insight, an epiphany perhaps, of the values he might have heard about at St. John’s and Fordham. Perhaps the three horses even hold some Trinitarian meaning for him. These two moments offer hope that Clayton will find his way through the wilderness, eventually. It’s a journey all of us can treasure as we make it with him.