Giving Back: An Interview With Jane Martinez Dowling

Giving Back: An Interview With Jane Martinez Dowling 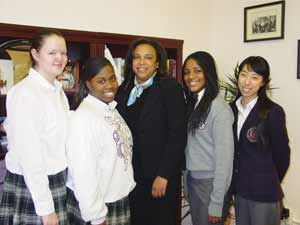 A year ago, Ms. Dowling was named president of the Academy of Mount St. Ursula in the Bronx, the oldest continuous Catholic school for girls in New York State, founded by the Ursuline Sisters of the Roman Union in 1855. , an associate editor of America , talked with her about her experiences of Catholic urban education and her hopes for its future.

How did you become involved in education?

My family came from the Dominican Republic, and they never left New York and never bought a house because they were putting all five kids through Catholic school. When I was in seventh grade at St. Jude’s, Sister Yliana Hernandez, a Presentation sister, told me I had the capacity to go to a prep school. She informally took five girls and we started doing preparation work to get into one of these independent schools; that was my life in seventh and eighth grade.

The only thing that Sister Yliana asked of us when she put us in the prep program was: When you have the means, which you will, and when you are well educated, which you will be, think back to this community and figure out how you’re going to give back.

Fast forward to 1990, my senior year at Georgetown University. I had been accepted at two firms to work as a paralegal for the summer, but in January during a five-day silent retreat something kept nagging at me, saying that I had to give back. That was the year Teach for America was founded; they came to campus, and I decided to do the program and teach in a New York City public school. I just felt that a couple of people had really invested in me and in my education.

What was it like teaching in the New York City public schools?

It was a totally different experience than I expected. It was right at the cusp of the crack epidemic. I was teaching kindergarten and had two crack babies in my class. The neighborhood was horrendous. The neighborhood was so horrendous that a corner near my school was chosen a few years earlier by Rudy Giuliani and Alfonse D’Amato as the place to stage a drug buy to publicize the problem. The families were great, the kids were great, but it was really impoverished.

It was also interesting doing Teach for America, because I got so ridiculed for being a woman and a woman of color and for believing in all the Roman Catholic doctrine. Most of the people doing it were not only incredibly progressive but almost liberal die-hards asking, How can you believe in the patriarchy of the church and all that stuff?

When my family came here and was navigating New York, the rock of our family was the church—we went to Mass every Sunday and said the Rosary at home, and we went to Catholic school. A lot of the people who make those sweeping statements don’t know a whole lot about struggle or understand the nuances of what the church does for poor people, what structures it puts in place so that people are able to have the luxury to think about philosophical issues and intellectualize and read and all of those different things. I mean, anybody who’s gone through the system here in New York can tell you their grandparents or their great-grandparents probably did not have the luxury to read books or the leisure to talk about societal issues. They worked their tails off so their kids could have those opportunities.

What led you to the Academy of Mount St. Ursula?

I had always been incredibly frustrated with the Jesuits about how much dedication they actually have to the poor, to mission work and to education. Steve Katsouros, S.J., [president of The Loyola School in Manhattan], who is terrific, asked me to be on the board at Loyola. But when I sat down with their board chair, he made it very clear that scholarship money for needy students was not their biggest priority at that point. So I turned it down. I just kept going back to, why don’t I do for girls what Sister Yliana did for me? There are a lot of pressures that both young men and young women face, but I think that girls particularly have lots of issues to deal with, like being caregivers to younger brothers and sisters, making choices about sex and drugs and all the issues that exist in inner-city culture. Sometimes all of that comes at the expense of not being a high performer. So I was thinking about starting a Regis for girls. Then when the chairwoman of Mount St. Ursula’s board called, I realized Mount St. Ursula has pretty much been serving that population for a long time.

You just referred to your vision for Mount St. Ursula as a “Regis for girls.” Are you thinking of Regis High School, the tuition-free Jesuit prep school in New York City?

I hesitate to use the term “Regis for girls” in some ways, because what I think a lot of people imagine is that these kids are in the 99th percentile at their local middle school. Our interest is what’s happening to the kids who are in that middle school population and have the potential to be very high performing but are falling through the cracks. Experience has shown me that there are kids who were failing miserably in public middle schools simply because they were not in the right environment. At Mount St. Ursula, how do we capture those kids? How do we capture the kids who have a tremendous amount of talent, but because of their circumstances they’re not identified as high performing?

The mission of our school is to teach young women of diverse cultures and socioeconomic backgrounds in the Ursuline tradition, to prepare them academically to go to college and ultimately to serve their communities, the larger community and their church—to be leaders. In Jesuit circles the phrase is “people for others”; here we talk about serviam, “I will serve.” How will you serve your community? How will you serve those who are less fortunate?

Fifty-two percent of our students rank below the poverty level; 40 percent are from single-parent homes. The tuition is $5,500, plus $475 in fees, and 152 of our 397 girls, 38 percent, receive some form of financial aid.

While Mount St. Ursula has always had a principal to lead the school and a development team, it has never before had a president. You are the school’s first president. Is it challenging?

“Much will be required of the person entrusted with much”—I bear that on my shoulders all the time. But I think I’ve surrendered a little bit to the idea that this is what I’m supposed to do, and somehow it’s going to work out. It may not work out precisely the way I want it to, but it’s just a palpable feeling I have that it’s going to happen. You can certainly plan, you can put the pieces in place to form a professional, not-for-profit organizational leadership framework, but at the end of the day, there’s a little bit of surrender. I have faith that if I work really hard, God will carry through this task and it will happen.

This article also appeared in print, under the headline “Giving Back,” in the September 10, 2007, issue.

Since graduating from Georgetown University in Washington, D.C., in 1990, Jane Martinez Dowling has been a rising star in New York inner-city education. She has worked as a teacher in the New York City public schools, served as the dev