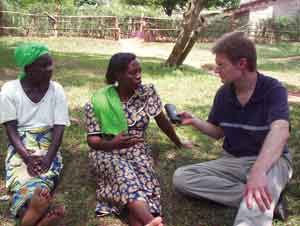 It is the greatest story of forgiveness never heardthe untold saga of the church-led reconciliation that has occured since the Rwandan genocide. Many Catholics in the United States are familiar with the basic outlines of the genocide. Between April and June 1994, the world sat virtually silent while almost a million ethnic Tutsi and moderate Hutu were slaughtered by the Rwandan army, paramilitary groups and ordinary citizens, goaded by an extremist Hutu government.

Few Americans know what has happened in Rwanda in the years since the killing ended. A decade of church-led social analysis, Scripture study and examination of conscience has yielded a social miracle and illuminated the boundless power of Christian forgiveness.

During the genocide the churchs record was mixed. Despite official Catholic opposition to the ethnic violence, some church leaders were prominent among the killers. Most notorious among the genocidaires, as they are called, was the Rev. Athanase Seromba, who was convicted last year of genocide and extermination by the United Nations International Tribunal for Rwanda. At the height of the violence, Father Seromba encouraged 2,000 of his Tutsi parishioners to seek refuge within the church, then ordered a bulldozer to demolish the building, crushing all of them inside. The rubble has been left undisturbed as a memorial. Accounts of similar atrocities, committed by a small number of clergy and religious, stand alongside accounts of others heroism and self-sacrifice, leaving observers with a mixed impression of the churchs role.

Since then, however, the church in Rwanda has rebounded through a process of self-examination and national reconciliation rooted in preparations for the Great Jubilee of the Year 2000. Working with Catholic Relief Services (which lost five staff members in the genocide), the Rwandan bishops organized a jubilee synod, to involve all levels of the church, in the 20,000 base communities that make up the church in Rwanda. Each one of these groups of 25 families took up the question of the role of ethnicity in the Rwandan genocide. Participants at all levels of the population were encouraged to tell the truth. The conversations broke the silence, and parishioners began to speak of the unspeakable.

In 2001, Archbishop Thaddée Ntihinyurwa asked the diocesan justice and peace commissions to begin implementing the synods conclusions, chief among them being the necessity of truth-telling, public confession and requests for forgiveness. In this, Rwanda took a different path than South Africa, which had developed a secular Truth and Reconciliation Commission headed by Anglican Archbishop Desmond Tutu. The secular commission held hearings aimed at airing the truth and recommended amnesty for those who came forward. In Rwanda, the church organized a massive program of Scripture study and reconciliation ministry, led by parish justice and peace commissions.

The Diocese of Kibungo asked Théophile Rwemalika, justice and peace coordinator for the Diocese of Kibungo, to work with Catholic Relief Services to train diocesan staff members, key parish leaders and base community animators in community trauma healing, conflict management, Catholic social teaching and human rights. Over the past five years, 3,000 leaders have been trained in the diocese and 20,000 nationwide. After parish peace and justice commission members complete the C.R.S. peacebuilding training, they seek out newly released prisoners (who are typically freed in groups of 40,000 at a time) to encourage them to confess their crimes and ask forgiveness of survivors.

Commission members also lead examinations of conscience within their own base communities and encourage neighbors and friends to come clean about their conduct during the genocide. As I traveled throughout Rwanda interviewing 200 local justice and peace commission members in March, 2006, I heard the same story in each parish. Men confessed brutal killings and looting. Women admitted pointing out Tutsi, turning away frightened neighbors who sought refuge and looting. Each described a moment of moral clarity, experienced while reflecting on Scripture, that compelled them to confess. All reported twice asking for forgiveness: once in public and once in the homes of survivors. Peace and justice commission leaders told stories of supporting killers by accompanying them to survivors homes. Most of those petitioned granted forgiveness.

Théophile explained that the training also supports the Rwandan judicial policy of trying the ringleaders of the genocide and those who committed sex crimes in its federal courts and at the United Nations genocide tribunal in Arusha, Tanzania. Ordinary Rwandans who participated in the killings are now (since 2004) tried in local courts called Gacaca (Ga-CHA-cha), whose focus is reconciliation.

Some people, like Justin Ndagijimana, have personally forgiven as many as eight others. When asked how many family members he lost in the genocide, Justin could not count the number precisely. He said: I lost my wife, a child, my dad and my mom, my sisters, my niece and my nephews, my uncles and aunts. I cant remember how many; I think it was around 65 relatives.

Justin was well aware that far more than the eight people who confessed killed his family and looted his property. But he preferred to discuss the eight forgiven, not those who remain cloaked in anonymity. He explained why he forgave the man sitting across from him, Kanchan Baragata:

Because Kanchan confessed his crimes, and because the word of God says the one who doesnt give pardon will not be pardoned, I forgave him. I also felt that it was not his will to kill. It was animal; it was Satan, who pushed him to kill. Since then weve become friends. We meet in the bar and share beer. I gave him pardon, but I do not know what the court will decide. I would like the court to set him free, but I cant control their decision.

Justin conveyed a number of elements of postgenocide forgiveness in his statement. First, Kanchan confessed his crimes, providing details and the names of his accomplices, elements crucial both to survivors sense of closure and to bringing other killers to justice.

Second, Justin allowed himself to be converted by Scripture. When he paraphrased Matt 6:15, he confessed that he, too, is a sinner in need of Gods forgiveness; how he forgives others on earth affects his own salvation. Third, Justin believes Kanchan surrendered his will: to authorities, to the mob of killers, even to Satan. If survivors believe that killers were not architects of the genocide, did not enjoy killing their relatives and are truly remorseful, it is much easier for them to forgive than if one or more of these conditions is not met.

Finally, Justin maintains a relationship with the killer. For Justin and many of the others I met in Rwanda, forgiveness is not a one-time Hollywood moment. To be sure, there are flashes of intense drama, such as when the words I forgive you are first spoken. But a wealth of conversion leads up to the instant of forgiveness and, to be lasting, the forgiveness must be ongoing. If Rwanda is to become a country of Rwandans, rather than Hutu and Tutsi, actions like Justins sharing a beer with his familys killers are essential elements of nation-building.

Justice on the Grass

Justins story is also linked to the local Gacaca courts and the hundreds of thousands of cases that face these local tribunals. Gacaca literally means justice on the grass. Gacaca was the judicial system of precolonial Rwanda. Persons of great integrity were elected to administer what typically amounted to a small claims court. Even for criminal offenses, fines and what we now call restorative justice were emphasized over imprisonment. Rwandas new government brought the Gacaca courts back in 2004, after the success of a two-year pilot project, in order to try a backlog of 800,000 cases relating to the 1994 genocide.

The judges encourage ordinary Rwandans to confess any crimes they might have committed during the genocide and to ask pardon of survivors publicly. When confessions are not forthcoming, the judges ask neighbors seated on the grass before them to tell what they know: Where was this person during the genocide? Who knows what happened to the home of this man? Who killed this young womans parents?

Throughout Rwanda, hundreds of women and men trained by C.R.S. have been elected judges. Nationwide, C.R.S.-Rwanda estimates that 80 percent of judges in the Gacaca process are members of a parish justice and peace commission. Each of the seven parish groups with whom I met included between two and seven judges. All of them reported that their participation in the training and peacebuilding ministries enhanced their standing in the community as reconcilers and contributed to their election. The judges also noted that the C.R.S. peacebuilding training augmented the governments training for new Gacaca judges, which includes topics like the history of Gacaca, the various categories of crimes and the importance of impartiality.

A handful of genocide survivors have said that the churchs peacemaking efforts and the Gacaca process let the killers off too easily; those who committed genocide are not truly held accountable for their actions. If the killers say the right words, they are rewarded with light sentences and reintegrated into the community. I felt a moment of sympathy for this view when I asked a killer from Kirehe Parish why he beat two little girls to death with a stick. Bad governance, he replied. It was as if I had inquired why the road from Kigali to Kirehe was in such sorry shape. Bad governanceit sounded rehearsed, as if he had learned that certain words, when repeated like an incantation, could unlock a prison door.

The encounter left me wondering about culpability. In a way, everyone we spoke to blamed the former government for the genocide. The government developed the plan and gave the orders. So among a people accustomed to blind obedience, where did public obligations end and personal responsibility begin? Didnt German soldiers after World War II say I was just following orders? Couldnt they have said bad governance just as glibly?

I shared my questions with Gloriosa Uwimpuhwe and Joseph Muyango of C.R.S.-Rwanda, both of whom insisted that those who abuse the reconciliation process are a small minority. The Gacaca courts have added momentum to the churchs peacebuilding work, not corrupted it, they argued, noting that the base community process includes careful study of the root causes of genocide. To my surprise, at the end of the visit, the man in Kirehe was the only person whose sincerity I doubted. The 200 others (and thousands I did not meet) stood beside him as an inspiring counterexample, witnessing through their honesty and courage to the boundless power of Christian forgiveness. Rwanda has endured the unspeakable. Strong faith communities and the imaginative power of Scripture are helping its people to speak at last of these horrors and of the hopes they have for a new nation founded upon reconciliation and solidarity. It is a story of hope that invites further study and replication among other traumatized peoples.

This article also appeared in print, under the headline “Forgiveness Unbound,” in the September 10, 2007, issue.