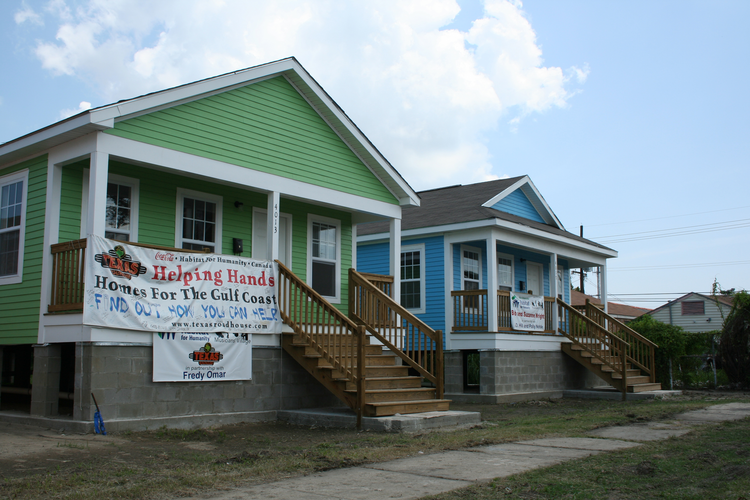 The drab pink house on Genois Street in New Orleans does not have power, water or what most people would call walls, but Tracy and Ava Smith have been living in its shell ever since they returned from a shelter two months after Hurricane Katrina’s landfall. On a recent spring day, Tracy, a hardware store employee and former Loyola University photographer, pointed out to visitors how the unscathed baby blue walls of the couple’s second-floor bedroom contrasted with the hollowed-out ground floor, still littered with debris and marked by a four-foot high water line where the flood waters of Katrina stopped in September 2005.

“There’s so much to do that I have to compartmentalize things just to get out of bed in the morning,” said Tracy, who was robbed in the Lower Ninth Ward while bicycling through chest-high waters to find his mother-in-law. “Sometimes I just want to hit something.” The slow recovery of the Smiths, whose midcity neighborhood remains mostly empty and strewn with rubble, is not unusual in a town where Mardi Gras and bumper stickers like “New Orleans Is Coming Back!” belie a harsh social reality—tens of thousands are still living in FEMA trailers and just a fraction of the city’s social services (hospitals, schools, public transportation) are back in operation.

For many families like the Smiths, whose two grown children live out of state, the only bright spot comes with the thousands of young volunteers who still travel from around the country to gut and rebuild homes. Although some people may have forgotten New Orleans, 10,000 volunteers from high schools, colleges and beyond descended on the city this past March to give up their spring break for the second consecutive year. Among them were more than 500 faith-driven students from Jesuit institutions, who augmented their work by gorging on statistics and local residents’ stories at “Rebuilding Communities: Facing Racism and Poverty,” a social justice conference co-sponsored by the San Francisco-based Ignatian Solidarity Network and the New Orleans Province of the Society of Jesus.

Under the watchful eye of Ava Smith, students from Jesuit College Preparatory School in Dallas spent their week cleaning up broken plaster and sheetrock in the house, rebuilding her prized backyard garden, and restoring a large statue of Mary to prominence in the garden’s center. As they did so, Ava told them her Katrina story, fed them lunch and took them grocery shopping. “My mother’s house was flooded and my sister’s house was flooded,” she related. “The worst thing isn’t the physical damage, but the emotional wear and tear of losing friends and family.”

For the suburban Dallas students, making their first relief trip to the city, the Smiths’ frustrations opened their eyes to previously unseen social problems. “I’ve never experienced this kind of suffering in my life,” said Joseph Martinez, a senior. “It’s one thing to see it on television, but to actually live with it for a week is something else.” His classmate Walden Avery expressed anger that people with adequate financial resources had been able to rebuild their homes, while the rest of the city was still waiting. “It’s not right that some people are back on their feet and others can’t come back,” he observed.

The campus minister who accompanied the boys, Keith Reese, said that a key part of the group’s experience was realizing how little they could do to “fix” the situation. “You do a little each day, but you also feel helpless.”

To many of the volunteers, it was no coincidence that their service trip fell during Lent, the period before Easter when, as Christians, they embrace fasting, penance and almsgiving in an effort to share the 40-day suffering of Christ in the desert. The volunteers shared in the uncertainty behind the daily routine of many local residents: tearing down and fixing up houses in once thriving neighborhoods, which may be demolished anyway when the dust finally settles. They faced the same unanswered questions: How long will the rebuilding last? Will the neighbors come back? What will the government do?

A Route to Resurrection

But despite the hardships they shared, the volunteers also saw how suffering is a route to resurrection. Bobby Westbrook, a senior at Dallas Jesuit, said as he placed rocks around Ava Smith’s garden that he could see Easter approaching in the early New Orleans springtime and in the time he spent smiling and laughing with the Smith family. “You struggle with the monotony of the work, but you see little signs of things coming to life. It feels good in the end.”

And Ava found herself smiling more because of the young men. “They walked with us in our suffering. What they did around the house is not as important to me as who they are and the fact that they were here. Just to have someone acknowledge what you’re going through makes all the difference in the world.”

This article also appeared in print, under the headline “The Grace of Suffering,” in the June 18, 2007, issue.

Sean Salai, n.S.J., wrote this article when he was a second-year Jesuit novice based in Grand Coteau, La. He spent the spring semester of 2007 working in campus ministry at Loyola University in New Orleans.