A Child Is Born 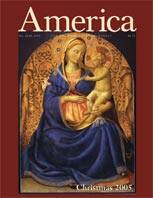 The Metropolitan Museum of Art is currently offering an exhibition of the work of Fra Angelico (1390/95-1455), one of the most extraordinary artists of the early Italian Renaissance period. His vibrantly hued, finely detailed images of saints, angels and the Holy Family conjure wonder and emanate peace. Many of the most striking works in the exhibit depict Mary and her infant son, a subject that has long captivated artists. In some, the baby Jesus possesses a delightful realism: he tugs at mother Mary’s veil, or peers into her face intently, transfixed. In others, the boy seems hardly a child at all. In Virgin and Child Jesus rests regally in Mary’s arms, dressed, like her, in a gown of royal finery. He gazes out upon us with the solemnity of a judge, and his hands gesture in blessing. Likewise, in Virgin and Child With Angels, by Fra Angelico’s contemporary Benozzo Gozzoli, brilliant red- and blue-winged cherubs press in upon the haloed pair from all sides while, again, Jesus blesses us. In Angelico’s Virgin of Humility, the baby caresses Mary’s cheek with the tenderness of a lover.

Through such presentations, Angelico and other artists attempted to capture the essence of the Incarnation: Jesus Christ, fully human, fully divine. Standing before their work, we are meant to bow down and worship our savior king.

Still, it can be strange to our modern eyes. The otherworldly self-possession of the young Jesus in some pictures suggests less a child than a changeling. Jesus, it would seem, came in human form, but was not in fact a human being. A similar difficulty can ensue in reading the Gospels. Written in the genre of testimony, good news, certain Gospel passages imagine Jesus as wholly knowledgeable of his identity, purpose and fate. Such complete self-awareness is foreign to our own experience of life. It, too, implies that Jesus is not truly one of us.

At Christmas we proceed from an altogether different starting point: an infant, immensely delicate and utterly vulnerable. Like ourselves, he will advance in wisdom and grace as in his physical form, over many years. He will discover his purpose gradually along the way and proceed in hope. He is Emmanuel, God with us in the fragile and sometimes murky fullness of our humanity.

And he is present in our human scene, with all its injustice and uncertainty, as well. Pictures of the virgin and child by Fra Angelico often present the pair front and center, seated on a throne, while saints and angels worship in the background on a landscape of burnished gold. But the baby Jesus was not born at the center of a holy world. Judea was a tiny, remote nation, its land occupied by the vastly more powerful Roman Empire and its population living under the threat of violence from not only the Roman troops but Jewish zealots seeking liberation.

Luke imagines the event even farther removed: Jesus is born not in Jerusalem, nor at home in Galilee among friends and family, nor even in a human habitation at all, but in a stable, among animals, with perhaps a few shepherds standing nearby. In Matthew, no sooner is he born than his family must flee the country entirely and live as refugees in Egypt. When Herod, the Roman-appointed ruler of Galilee, is unable to locate Jesus, he executes every Jewish boy two years old and under.

Aware of what has been accomplished and revealed in the life, death and resurrection of Jesus, we come to the feast of Christmas and regale the child with glory and praise. And yet, the heart of the feast is not the divinity of Jesus, but the radical extent of God’s desire for us. God so longs to be with us, and longs for us to be with him, that he chooses to become a human being, with all the uncertainties, vulnerabilities and struggles that come with that. In love with us, he places himself in our hands and in the hands of our troubled world. This is the source of our Christmas joy. This is the heart of our wonder.

In the stories of Christmas, we hear of angels, shepherds and wise men who come bringing gifts to the newborn king. To contemplate a picture by Fra Angelico is to behold one such sumptuous offering. Gathered with them this year around the manger, may we both offer praise and also be still and experience God’s abundance and love. As the Father will later say to his Son at the River Jordan, so in the birth of Jesus God says to all of us, You are my beloved. He abandons himself joyfully into our care.

The Editors
Show Comments (
1
)
Comments are automatically closed two weeks after an article's initial publication. See our comments policy for more.
15 years 11 months ago
This is the first time I write to you, though I have read America for over 50 years. Your editorial “A Child Is Born” (12/19) was incredibly beautiful. In the same issue the article “The Historical Mary,” by Robert P. Maloney, C.M., was wonderful. I am keeping the issue because it is so beautiful and I want to reread those pieces.