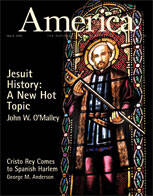 They came from all over, some 220 parents and children, and waited in line for up to three hours to enter the century-old red brick building in East Harlem. In this once Italian neighborhood, they were now mostly Hispanic immigrants from all over Central and Latin America and the Carribean. What the parents sought in this hulking building was the fulfillment of a dream: a new kind of Catholic high school that would shepherd their children into college for an affordable tuition.

The new undertaking—Cristo Rey New York High School (Spanish for Christ the King)—intends to perform this feat through a unique program that enables its students to prepare for college while paying off most of their tuition by working at various outside jobs during school hours. This involves both cracking the books hard and spending a full day each week in the business community. The aim is to get each student accepted into a college by the end of senior year—a remarkable goal for the children of recent immigrants, who are often struggling just to survive.

During this open house, I circulated with the parents and potential scholar-workers through the freshly painted classrooms and hallways, as faculty members and several currently enrolled students described the school’s daily life and goals—and the challenges faced by the new endeavor. Many parents told me that although they had wanted their children to study in a Catholic setting, they had almost given up hope because of the prohibitive costs. Cristo Rey presents an unrivaled opportunity—but one that will require strong determination on all sides.

A major reason for this, says William Ford, the school’s principal, is that many of the potential students come from schools that have not provided them with the tools necessary for a college-preparatory level of education. “We’re in a race,” Mr. Ford told me, “because we’re behind the ones whose elementary and middle schools prepared them well. And we have to run faster just to catch up with them.” He has spent time in El Salvador and speaks fluent Spanish—a vital asset in a school that requires a knowledge of Spanish for all its students.

The idea of a high-quality prep school for inner-city students originally surfaced among Jesuits in Chicago over a decade ago, but the apparent impossibility of paying for it threatened to end the dream even before it got underway. Then someone came up with the idea of arranging jobs for the students, who would then be able to cover most of their own tuition costs. And so, in 1996 the first Cristo Rey Jesuit High School opened its doors. There are now 11 Cristo Rey schools, though not all have the words “Cristo Rey” in their names. In Austin, Tex., for example, there is Juan Diego Catholic High School, and Los Angeles has Verbum Dei High School. But all operate according to this work-study principle. In New York four students share a single entry-level job at one of the participating institutions. As to the difficulty of combining work with a demanding academic curriculum, Mr. Ford noted that teachers at the first school in Chicago soon realized that “a lot of learning was taking place not just in the classroom, but also in the workplace.” In addition, he added, the work-study combination “gave the students a boost to their dignity.” With the students’ salaries covering 75 percent of each one’s tuition, about $2,000 of tuition remains for the families to cover. Scholarships are available for those who cannot manage this.

Among the more unusual workplace assignments is the office of the New York State Capital Defender, which provides legal representation for people who face the death penalty. “Since the four students assigned there began working,” Mr. Ford says, “the time sheets coming back to us have been filled with glowing commendations.” In the first contacts with the 25 sponsoring institutions, he reports, there was “a certain healthy skepticism, especially when we got to the tricky part about the incoming students being only 14 years old.” What usually convinced the prospective employers, however, is the 99 percent attendance rate and the 99 percent on-time arrival rate that has been typical in all the schools in what is now known as the Cristo Rey Network. “We guarantee that same high level of attendance and punctuality here,” he said, “and even the company representatives admit that almost no one in their own ranks can claim such a record.”

Eight additional groups are now exploring the possibility of opening a school, either through a religious congregation or through a diocese. Although the Cristo Rey concept originated with the Jesuits in Chicago, the Society of Jesus is just one of the endorsing groups nationwide. In New York City the Holy Child Sisters and the De La Salle Christian Brothers are also involved.

Jeffrey Thielman, the network’s vice-president for development and new initiatives, explained the funding. If a feasibility study proves positive, two foundations will give between one and 1.2 million dollars in start-up funds—seed money that is critical in hiring key personnel. The two are the Cassin Foundation and the Bill and Melinda Gates Foundation. Not all feasibility studies have led to positive outcomes, however. One group that wanted its projected school to serve both low-income and middle-class students was turned down, because a key concept of the Cristo Rey schools is that they serve the economically disadvantaged. “The goal is to make a private Catholic college preparatory education accessible to people who otherwise wouldn’t have dreamed of that,” Mr. Thielman pointed out. “It is a requirement that our schools serve the economically disadvantaged, and it’s critical that we not vary from that requirement.” Family income data for all the schools now in operation suggests that families of students in the New York school have the lowest incomes of all.

The East Harlem school looks out across a typical inner-city backyard, near a maze of railroad tracks that surge upward from Grand Central Terminal. The shrill whistles of passing Metro North trains can be clearly heard as they speed away from the city. That sound might serve as a metaphor for Cristo Rey students as they hurry toward a goal—one previously out of reach, but now within their grasp. That was the impression given by a student named Alicia, who spoke with me during the lunch hour. Working in a law office, Alicia has her sights set on becoming an attorney herself, and eventually a judge. “I want to make it to the top,” she said. Whether or not she realizes that ambition, her cheerfully resolute manner exemplifies one of the main criteria for acceptance at Cristo Rey: an attitude of determination, be it at work or in the classroom.

Show Comments (
2
)
Comments are automatically closed two weeks after an article's initial publication. See our comments policy for more.
16 years 9 months ago
I happened to read your article shortly after reading Tom Friedman's editorial piece (4/29) in the New York Times. Fortunately your words gave me hope.

Perhaps a request to Bill Gates for financial aid supporting this program could provide hope to many children.

16 years 9 months ago
I happened to read your article shortly after reading Tom Friedman's editorial piece (4/29) in the New York Times. Fortunately your words gave me hope.

Perhaps a request to Bill Gates for financial aid supporting this program could provide hope to many children.